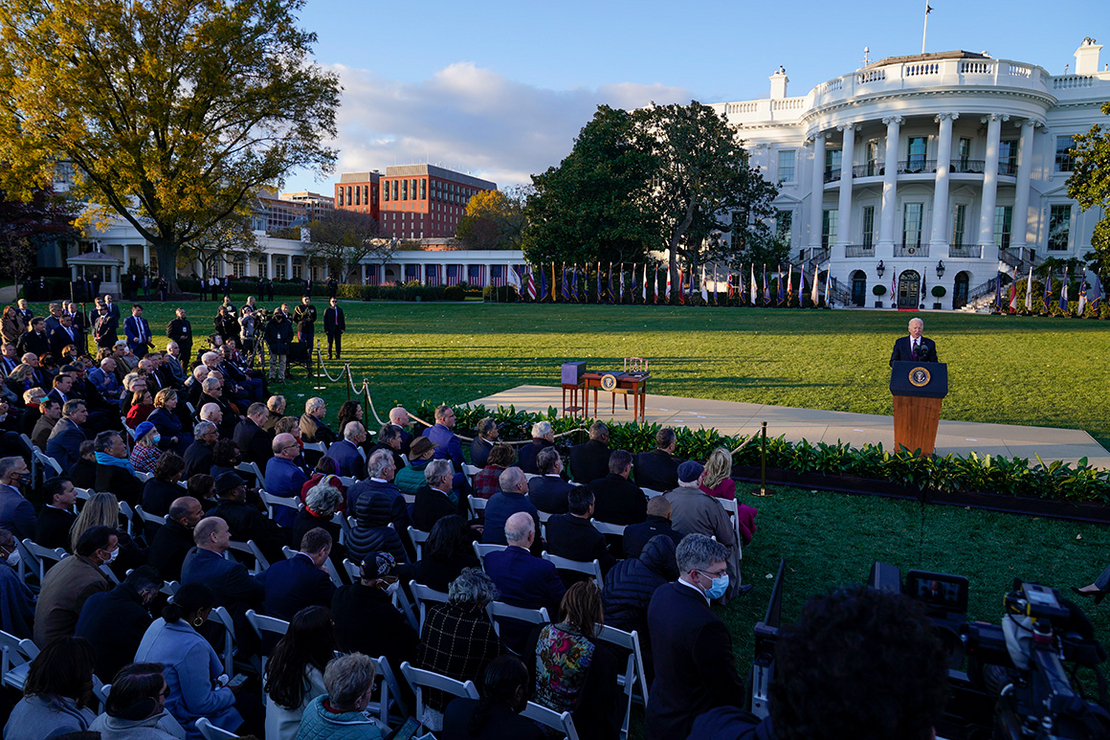 President Biden speaks before signing the $1.2 trillion bipartisan infrastructure bill into law during a ceremony on the South Lawn of the White House in November. AP Photo/Susan Walsh

The infrastructure deal passed last year by Congress was written to address climate change over the long term. But increasingly activists see it as one of President Biden’s best tools for cutting emissions right away.

One reason is pragmatism.

The $1.2 trillion infrastructure package is now law, and other climate-fighting options available to Biden are either threatened or stuck in limbo. The president’s “Build Back Better” proposal remains stalled in the Senate, and EPA’s ability to address climate through regulation could be curtailed by a conservative Supreme Court.

Then there’s what’s in the new law.

Yes, it includes several future-facing climate provisions. Those include research and development dollars needed to commercialize advanced nuclear reactors, hydrogen and direct air capture. All these technologies could transform American climate efforts in future decades, but are unlikely to be deployed at scale before 2030.

How that money is used likely will determine the extent of emission reductions that can be wrung from the economy in coming years.

Climate advocates said they are committed to fight for “Build Back Better” and the $300 billion in proposed clean energy tax credits the legislation includes. But some acknowledged they had begun to scour the infrastructure law to maximize emission reductions.

“We think both are vital for decarbonization. We can’t stop with one,” said Conrad Schneider, advocacy director at Clean Air Task Force. “But that said, one is law and in implementation and we are focused on that.”

The law includes $3.5 billion in funding for the Weatherization Assistance Program, which administration officials say can be deployed to reduce energy use and consumers’ energy bills. It also contains $27 billion in grid investments.

Transmission, in particular, is vital to expanding generation of renewable resources. But much of the money in the infrastructure law is targeted at hardening the grid against disruptions. It nonetheless contains provisions that could aid transmission build-out, including $2.5 billion to facilitate transmission development and $3 billion in smart grid investments, which can be used on technologies such as energy storage and microgrids.

If those investments can help the acceleration of renewable build-out, then the Civilian Nuclear Credit program is widely viewed as one of the administration’s best tools to prevent emission backsliding. The program will provide $6 billion over five years to reactors struggling to compete with natural gas and renewables.

Since 2012, a dozen nuclear reactors have closed in the United States. But the rate of new renewable installation in general has not been fast enough to compensate for nuclear units that have been taken offline — leaving gas to fill the void. New York, New England and Pennsylvania all have seen power plant emissions increase following the closure of nuclear plants since 2019 (Climatewire, Feb. 17).

But how the program is administered could determine its efficacy at preventing closures.

Environmentalists are particularly concerned about the prospect of utilities that operate as regulated monopolies receiving tax credits. Regulated utilities generally are able to pass costs onto their consumers, meaning their nuclear plants face less economic pressure than those that operate in markets where power companies compete to sell electricity in wholesale markets.

“A lot of the fear with the program right now is what level of transparency is going to be included,” said Caroline Reiser, a staff attorney at the Natural Resources Defense Council. “The taxpayers deserve to know if their tax money is leading to windfall profits for nuclear plant owners.”

The Energy Department has begun to outline how it will dole out the money. In a recent request for information, the department said regulated utilities will be able to qualify for nuclear assistance, but they will need to prove their facilities are in need of financial assistance to stay open.

The program also requires utilities to return money to the government in the event subsidies are not needed. That provision could be particularly important at a time when natural gas prices have risen, alleviating some of the pressure on nuclear facilities.

“I would expect DOE to perhaps favor the ones that are most at risk for financial reasons,” said Christopher Guith, senior vice president at the U.S. Chamber of Commerce’s Global Energy Institute.

Perhaps the biggest area for potential emission reduction is in transportation. Nearly a third of all American greenhouse gas emissions come from transportation, more than any other segment of the economy. The infrastructure law will pump $600 billion into the sector.

A strategy that directs more than a quarter of the money to highway expansion could increase transportation emissions by 21 million tons in 2030, according to an analysis by the Georgetown Climate Center. That is the equivalent of what 4.5 million cars currently emit in a year.

Conversely, an approach that focuses on maintenance for existing roads, transit and alternative transportation could reduce emissions by 14 million tons.

States will have a large say in how that money is spent, making it hard for the Biden administration to control the flow of dollars. In December, the Federal Highway Administration issued guidance with the recommendation that states prioritize maintenance. It quickly drew a rebuke from Republicans, who claimed the administration was trying to foist its climate agenda into transportation spending (Climatewire, Feb. 10).

“There are a ton of good programs in this bill with the real potential to bend the curve,” said James Bradbury, mitigation program director at the Georgetown Climate Center. “But there is always a risk — and always has been a risk — of putting upward pressure on transportation emissions if there is a lot of investment in highway expansion.”

But the mere fact that there is a debate over the emissions impact of highway spending shows how politics have changed in recent years, he noted. Transportation spending has seldom been considered in climate terms, he said.

There is a strong interest among many states in greening their transportation systems, whether it is investing in electric vehicle infrastructure, transit, or alternative forms of transportation such as walking or biking. Developing a tool to measure the emissions impact of transportation projects could go a long way to helping states make the most of the money, Bradbury said.

Administration officials said they remain focused on implementing the infrastructure law even as they push for the tax package included in “Build Back Better.”

“The Department of Energy is firing on every cylinder to implement the bipartisan infrastructure law because, from the beginning, it has been a core part of the president’s plan for creating jobs, modernizing our energy grid, fighting climate and lowering energy prices,” said Jeremiah Baumann, deputy chief of staff at the Department of Energy. “It will bring those benefits to American families and businesses in the near-term and long-term.”

“But,” he added, “a huge chunk of those benefits are in the ‘Build Back Better Act,’ so we remained equally focused on that.”

Indeed, there are limits to how much carbon can be cut with the infrastructure law. In climate terms, its primary purpose is to help commercialize technologies that could be crucial to achieving net-zero emissions but remain far from market and too risky for private companies to undertake.

When researchers at Dartmouth College and Princeton University modeled the law’s impact on emissions, they found it only would reduce emissions by 1.3 percent in 2030 compared to a business-as-usual scenario.

That is why administration officials, environmentalists and some industries remain focused on the tax package, which contains a wide range of incentives. Those include everything from wind and solar to storage and transmission to electric vehicles and carbon capture and sequestration.

The assistance for carbon capture and sequestration in the infrastructure law is critical, but the tax credits in “Build Back Better” would help deploy projects, said Sean O’Neill, senior vice president of government affairs at the Portland Cement Association, a trade group representing cement manufacturers.

“Those provisions that are in ‘Build Back Better,’ again, in my opinion, could stand on their own. Many are supported in a bipartisan way,” O’Neill said. “Our urging would be for those provisions to move on their own or in a package of incentives the Congress could consider this year.”