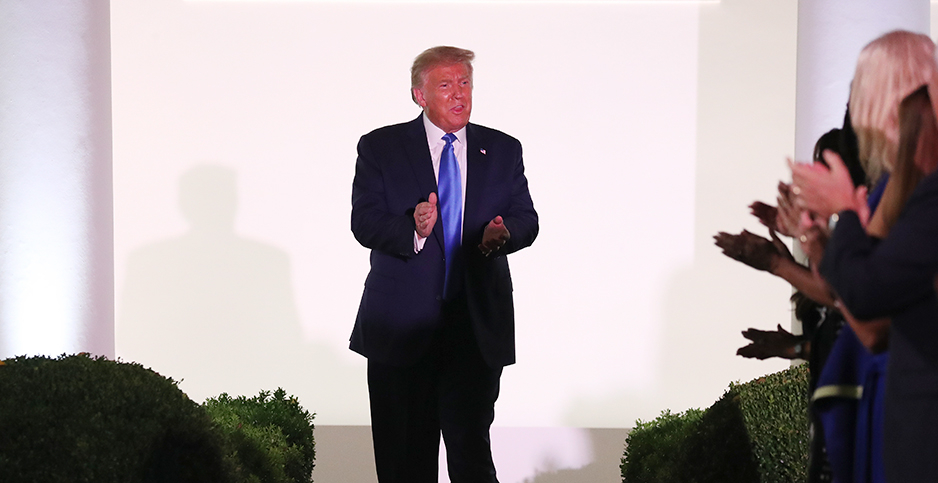 It’s rare that President Trump gets upstaged when he takes the podium, but Hurricane Laura made a compelling case last night.

The Category 4 hurricane collided with the Gulf Coast hours after Trump and his fellow Republicans held the third night of their national convention.

Last night wasn’t the first time a storm has created a split-screen situation for viewers. But historians say the 2020 Republican National Convention stands out because of how Trump and his party have handled the juggling act.

During the 2008 and 2012 GOP conventions, Republicans canceled a day of proceedings because a hurricane threatened some part of the United States. There was no need in 2016, when Trump officially became the GOP nominee, because there was no active hurricane at the time.

But this time around, with Trump up for reelection and Laura on the coast, the party elected to soldier on — with little, if any, change to the schedule.

There was no mention of the impending storm last night until Vice President Mike Pence spoke and said that the administration was prepared to respond and would be with the victims "every step of the way."

Jacob Remes, a history professor at New York University, said that decision highlights a potential vulnerability for Trump: an inability to show empathy.

"One of the things presidents have often done, particularly in the post-war period, is become comforter in chief — to show their leadership and their sympathy — and portray a particular type of masculinity that is both calming and helpful and sympathetic," said Remes, who studies disaster response. "It’s striking how Trump has refused to or is unwilling to do that. Really, he doesn’t think it’s his job to do it."

He said Trump has been similarly distant when it comes to the coronavirus pandemic. And that same indifference also defined his response to Hurricane Maria, Remes added — such as when the president threw paper towels to storm victims or questioned Puerto Rico’s fatality numbers.

California is now battling the second- and third-largest wildfires in its history. But instead of empathy, Trump has placed the blame on California officials and reiterated a past claim that the problem could be fixed if they raked the forest floors of natural debris.

"They’re starting again in California," he said at a rally in Pennsylvania last week. "I said, you gotta clean your floors, you gotta clean your forests — there are many, many years of leaves and broken trees and they’re like, like, so flammable, you touch them and it goes up. Maybe we’re just going to have to make them pay for it because they don’t listen to us."

The hands-off approach also applies to the slow-motion disaster that is climate change. Over the course of the convention, Republicans largely have ignored the issue and its activists — including from conservative groups pushing the party to develop its own climate policy.

Previous presidents have paid a political price for ignoring disasters, Remes noted. This year’s convention falls almost 15 years to the day that Hurricane Katrina devastated New Orleans, which killed almost 2,000 Americans and remains one of the costliest disasters in U.S. history.

President George W. Bush was criticized for flying over the wreckage left behind by Katrina in Air Force One. His administration’s poor response led to a drop in approval ratings from which Bush never fully recovered.

That fallout was likely on the minds of both presidential candidates in the 2008 race.

The Republican National Convention paused on its first day as Hurricane Gustav threatened Louisiana. Even though the convention was being held far away in St. Paul, Minn., organizers were sensitive to any reminders that would connect the presidential candidate, Sen. John McCain (R-Ariz.), to the Bush administration’s Katrina response.

In his acceptance speech, McCain said "we need to change the way government does almost everything" including disaster response.

His Democratic opponent, then Illinois Sen. Barack Obama, also said the country deserved better than a government "that sits on its hands while a major American city drowns before our eyes."

In 2012, the GOP canceled the first day of the Republican National Convention in Tampa, Fla., as Hurricane Isaac threatened another part of the state. However, in his acceptance speech, Republican presidential nominee Mitt Romney did not mention the storm, natural disasters or climate change.

In a traditional presidency, a natural disaster can provide a political advantage because it can give the incumbent a chance to put his or her leadership on display, said Barbara Perry, director of presidential studies at the University of Virginia’s Miller Center.

But Perry noted that Trump has a history of politicizing disaster responses, as well as downplaying the federal government’s role in handling the coronavirus pandemic.