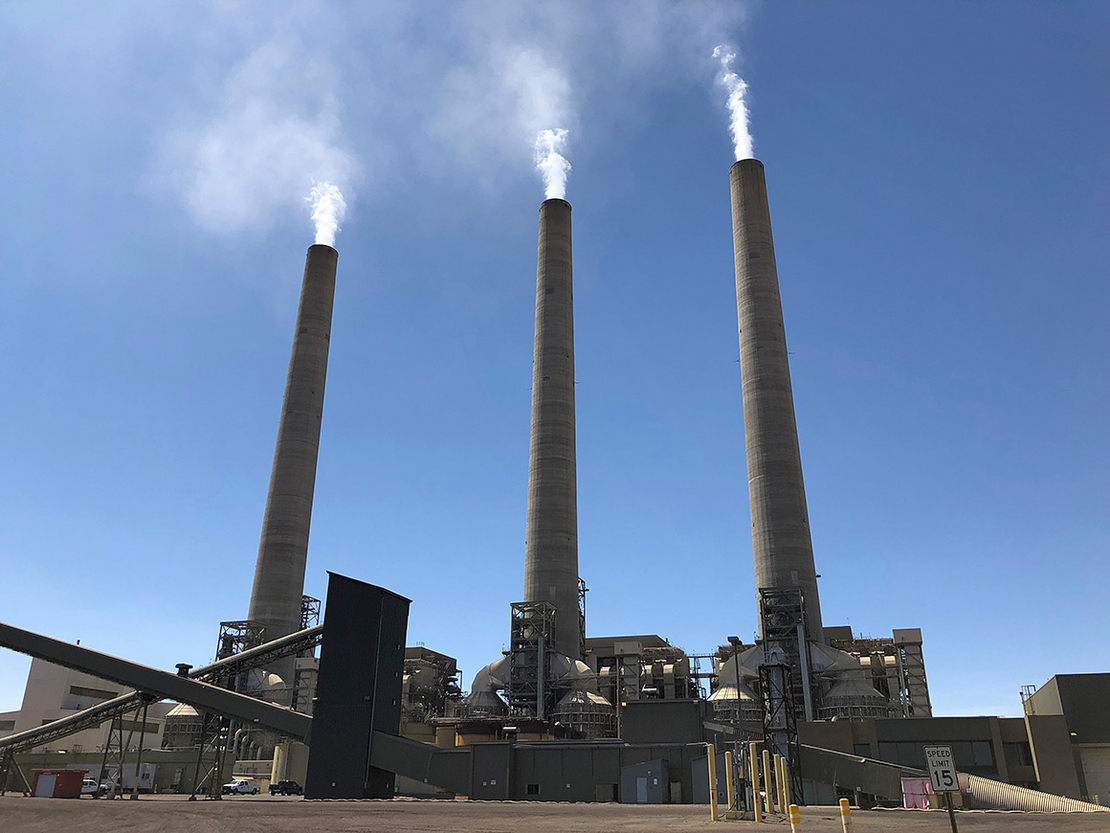 Three smokestacks are pictured at the coal-fired Navajo Generating Station in this August 2019 file photo. The structures were brought down in a controlled demolition late last year. AP Photo/Susan Montoya Bryan, File

Utility regulators in Arizona are considering a proposal to distribute $144.5 million to predominantly Native American communities affected by the closure of coal-fired power plants in a case that could have national implications for fossil fuel-dependent regions.

The Arizona Corporation Commission kicked off a three-day hearing this week on a utility rate case that includes a proposed payment plan for communities that are reliant on tax revenue and jobs from the coal industry. Under the plan, electric utility Arizona Public Service would allocate the funds to the Navajo Nation, the Hopi Tribe and Navajo County, all of which have hosted major coal generating stations for the Western grid, over the next 10 years.

The plan constitutes the largest payment proposal put forth by a utility company nationally for transitioning fossil fuel communities, said Eric Frankowski, executive director of the Western Clean Energy Campaign. It stems from an agreement reached between the utility and the Navajo Nation last year in which APS would designate $128.75 million to the Navajo Nation, $3.7 million to the Hopi Tribe, and $12 million to Navajo County communities near the Cholla Power Plant in northern Arizona.

Broadly speaking, the money would be used to spur new economic development opportunities, and APS has separately agreed to help electrify homes and businesses in the Navajo Nation and seek out proposal for new renewable energy projects in the region.

“APS and the Navajo Nation have negotiated this deal that, for all intents and purposes, is pretty significant,” Frankowski said. “While it may not have been as much as we hoped for, it’s still significant and pretty historic, and it’s binding.”

Environmental justice advocates say the plan could be a model for communities facing economic challenges as a result of the transition away from coal.

Multiple states with clean energy plans are including funding for programs to support cities and counties whose economies are built around fossil fuels — an issue the Biden administration also is aiming to address through the White House Interagency Working Group on Coal and Power Plant Communities and Economic Revitalization.

But the Arizona plan also raises questions about who should foot the bill. More than half of the money for the three communities would be covered by electric customers in Arizona, while the utility’s shareholders would pay for the rest.

Arizona’s Residential Utility Consumer Office, which is part of state government, opposes aspects of the case that would allocate funds to coal communities by raising electric rates. Daniel Pozefsky, chief counsel for the office, said in testimony submitted last month that the proposed payments included in the plan appeared to be “arbitrary” and that ratepayers were left out of the negotiations between the utility and the Navajo Nation.

“RUCO does not oppose funds going to the Tribe but does not believe ratepayers will see improved service or benefits. If any funds are approved for [coal communities] those funds should come from shareholders,” Pozefsky wrote in his comments.

In a draft order released last month, the commission’s assistant chief administrative law judge, Sarah Harpring, proposed cutting down the amount of money that would be designated to coal-affected communities. Instead of $144.5 million, APS would pay the three communities a combined $56.7 million under the draft order.

Customers are already on the hook for decommissioning and restoration costs associated with the eventual closure of the Four Corners Power Plant and the Cholla Power Plant, and they shouldn’t be punished for APS’s fuel choices, Harpring wrote in the draft order.

However, the utility could request more money in the future to help with the economic transition in the tribal communities, the filing said.

“[It] was APS, not APS’s customers, that chose to invest in the coal-fired plants, which have, throughout their decades of operation, produced electricity for APS to sell and APS’s customers to buy, economic benefits for the impacted communities, and severe negative externalities that have disproportionately impacted the Foul Corners region and its inhabitants, including those in the Nation, those on the Hopi reservation, and those not located on either but impacted by Cholla,” the draft order said.

‘What we’re looking for now is justice’

Tribal advocates, however, said the scaled-back proposal isn’t nearly enough, and it’s not clear whether a majority of the five commissioners support it. The commission is expected to make a decision on the issue by the end of today.

A 2014 study from Arizona State University’s L. William Seidman Research Institute estimated that the direct and indirect economic impacts of the Four Corners Power Plant and associated Navajo mine amounted to $338 million per year in gross economic impact for the Navajo Nation, APS has told the commission in written testimony. The facilities also yielded 2,293 jobs at that time, APS testified last December, referencing the study.

Meanwhile, more than 40 percent of residents of the nation live below the poverty line, and about 30 percent of homes lack electricity.

“Communities that lived in the shadows of these coal plants didn’t have electricity, while Phoenix, Las Vegas, LA and other cities in the region did get electricity from these plants,” said David Schlissel, director of resource planning analysis at the Institute for Energy Economics and Financial Analysis, a pro-clean energy think tank.

Commissioners, meanwhile, have proposed various alternative ideas. An amendment from Commissioner Jim O’Connor would reduce the payments to the Navajo Nation and Hopi Tribe to $1 million each, and to $500,000 for Navajo County.

Another proposal from Commissioner Justin Olson would eliminate the expenditures to the communities that would come from APS customers. Olson argued that the commission lacks the authority to collect money from APS customers and redistribute it “to primarily non-APS customers.” Many residents of the Navajo Nation are served by other electric utilities.

A third amendment from Chair Lea Márquez Peterson would keep the proceeding open to address the coal community transition proposal at a later date. That would give the commission more time to hear from members of the public and ensure that the money is expended appropriately, Peterson argued.

APS, for its part, has urged the commission not to delay approval of the payment plan to allow the affected communities to prepare for the transition as soon as possible.

During the hearings, however, the utility devoted most of its testimony to other aspects of the rate case, including what APS has described as an unreasonably low return on equity proposed by the administrative law judge. For investor-owned utilities like APS, the return on equity determines utility profit.

Members of the affected communities also have pressed the commission to make a decision.

“It’s so unfair that for the last 50 years, we’ve been denied all these opportunities,” Percy Deal, a resident of the Black Mesa coal region, which is split between the Hopi and Navajo reservations, said during the hearing yesterday. “What we’re looking for now is justice.”