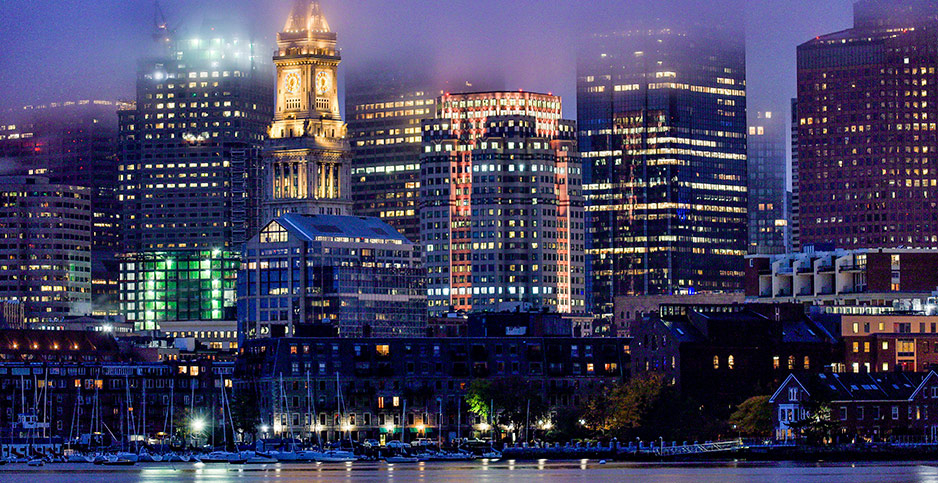 A bipartisan update of climate laws in Massachusetts would deliver new boosts for offshore wind and let cities and towns enact new restrictions on gas use. Downtown Boston is pictured at night. A. Farnsworth/agefotostock/Newscom

On Sunday evening, a bipartisan legislative committee announced a compromise on a long-debated climate package that would codify the state’s goal of zeroing out CO2 emissions by 2050, with new interim targets every five years. By 2030, emissions would have to fall by 50% over 1990 levels, followed by a 75% decrease by 2040. The legislation passed the Massachusetts Legislature last night by large margins in both chambers.

The emissions provisions echo those of at least 11 other states, plus the District of Columbia, that already have net-zero laws or informal targets for 2050 or sooner. Gov. Charlie Baker (R) has not said whether he would sign the bill, raising the prospect that he could demand alterations before the legislative session ends tomorrow — or even use a pocket veto to let the bill die.

But the legislation contains at least one provision that could elevate Massachusetts’ clean energy profile nationally: new "stretch" codes for buildings, which would allow towns and cities to enact net-zero emissions requirements or other emissions limits that go beyond what’s foreseen by the statewide codes. It also would increase the state’s renewable standard and offer incentives for low-carbon technologies including solar and hydrogen fuel cells.

The building code language could open the way for new prohibitions on the use of natural gas for building heat — like a 2019 ban that was passed in the Boston suburb of Brookline before being struck down because it conflicted with the statewide building standards.

State Sen. Michael Barrett, a Democrat who co-chaired the bipartisan team of negotiators for the bill, said the cities of Boston and Cambridge had voiced interest in adopting codes that require net-zero emissions for new buildings.

"Brookline is in the vanguard, but people in bigger, more complex places were the ones we spent the most time with," he said.

Jesse Gray, a Brookline official who led work on the 2019 gas ban, said the plan showed that his town had made building electrification policies "politically respectable" in the state. "Surprisingly and to our great delight, the Legislature caught on faster than anyone expected," he said.

Builders and fossil fuel trade groups have denounced such gas restrictions as costly and ineffective tools for CO2 reductions. Spokespeople for the American Petroleum Institute said they were still reviewing the bill’s details. But Massachusetts-based representatives from API have in the past said that governments "should not be in the business of denying citizens access" to natural gas and warned that electric technologies for buildings would have "dire consequences" for vulnerable populations (Energywire, July 24, 2020).

The legislative action came as at least two other major clean energy policies, both aimed at fossil fuels in transportation, emerged in Massachusetts in recent weeks from Baker’s office.

One pen stroke by the governor made the state part of the Transportation and Climate Initiative, a regional program to cap emissions from the transportation sector and invest money from companies buying emission credits. In a memorandum of understanding signed by Baker on Dec. 21, Massachusetts became one of four jurisdictions to take part in the initiative — although nine other states decided not to join in the short term.

That plan has been unpopular among left- and right-leaning groups alike. Environmental justice groups have criticized it as damaging to low-income communities of color, saying it would force those areas to shoulder a larger pollution burden (Climatewire, Dec. 22, 2020). And the Massachusetts Fiscal Alliance, a conservative anti-tax group, called it "bad policy and even worse politics."

In a separate road map for emissions reductions unveiled last week, Baker’s energy officials also signaled that the state is likely to phase out sales of gas cars by 2035. That’s the target date adopted by California, whose governor has directed regulators to draw up implementing rules.

Officials in the Massachusetts Department of Energy Resources wrote in the document that the state’s laws require it to adopt California’s vehicle emissions rules, whenever they’re more stringent than federal standards. "When finalized, those California requirements would also apply to vehicles in Massachusetts," they concluded.

The Massachusetts Legislature’s climate compromise, known as "An Act Creating a Next-Generation Roadmap for Massachusetts Climate Policy," or S. 2995, would make multiple changes to the state’s power sector.

The state’s renewable portfolio standard would get an upgrade, lifting its mandate to 40% by 2030, a 5-percentage-point increase over the existing standard. Utilities would be required to purchase an additional 2,400 megawatts of offshore wind power, bringing the state’s total carve-out to 5,400 MW, the third-largest among states.

Utilities would also get the chance to run pilots and develop geothermal heating and cooling systems as a replacement for natural gas. Hydrogen fuel cell systems would be exempted from local property taxes. And the solar sector would get new enticements to serve lower-income communities and funding to train workers from disadvantaged communities.

Those changes would constitute the first major update of a 2008 state climate law that required 80% greenhouse gas emissions reductions over 1990 levels by 2050, said Barrett and the other co-chair of the bipartisan committee that brokered the bill’s passage, Democratic Rep. Thomas Golden.

They added that the bill would "step up the pace of our collective effort to slow climate change" and said it was "the strongest effort of its kind in the country."

But environmentalists’ reactions were mixed to the bill’s release.

Two groups, the Sierra Club and Environment Massachusetts, said the legislation contained important improvements and urged the governor to sign it, but they added that the 40% renewable standard did not go far enough. Both groups have backed sourcing 100% of power from renewables.

"Our window for climate action is closing, and we must act urgently to embrace a fossil fuel-free future," said Jacob Stern, deputy director for the Sierra Club’s Massachusetts chapter.

Advocates at Vote Solar, a pro-solar nonprofit, also called for the governor to commit to 100% renewable power but said the bill was "a huge step forward" for the state nonetheless.

The plan is a "testament to the tenacity of both our elected leaders and advocates during this extremely challenging time," the group said.

The Massachusetts Fiscal Alliance, by contrast, denounced the Legislature’s swift consideration of the bill yesterday, following Sunday’s announcement of a deal.

"The bill is a wish list for the environmental lobby that is densely loaded with new and future unchecked regulations and will raise energy costs for residents across Massachusetts," said spokesman Paul Diego Craney.

If signed by the governor, the bill would leave plenty of open questions about how the state will indeed arrive at net-zero CO2 from its electricity supplies — particularly the 60% of supplies not covered by the state RPS.

In 2019, natural gas provided two-thirds of the state’s electricity, according to the U.S. Energy Information Administration (EIA), and just short of 10% came from nuclear sources.

Barrett downplayed the possibility that carbon capture would need to play a major role, highlighting offshore wind and Canadian hydropower as important resources. The state was also likely to rely on power imported from elsewhere in New England, he noted. About 12 times more energy is consumed in Massachusetts than is produced in-state, according to the EIA.

But Barrett acknowledged the challenges involved for the state’s transition.

"There’s no question that we need new technologies to come along," he said. "I just wouldn’t suggest it needs to be one or the other."