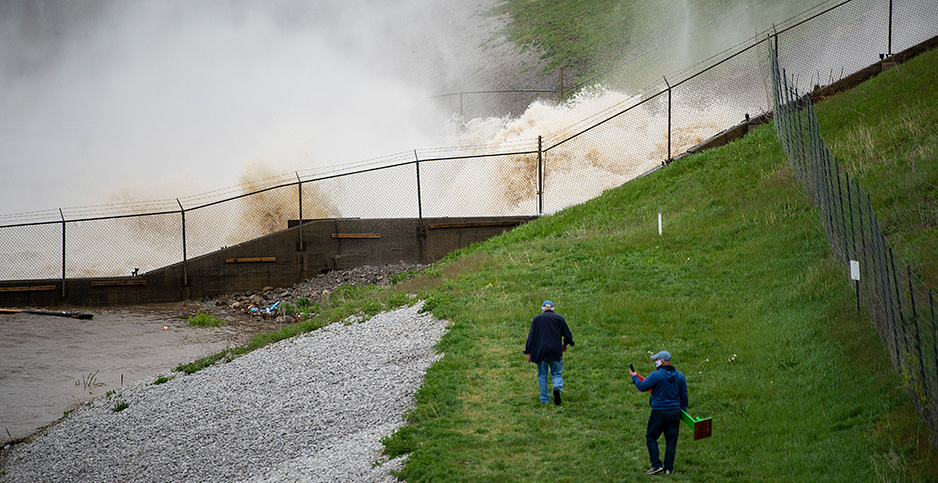 Historic rainfall caused one dam failure and another to release water uncontrollably yesterday in central Michigan, forcing the evacuation of 10,000 residents and emergency shutdowns at Dow chemical facilities and triggering an alert at a nuclear reactor in the area.

Levels of the Tittabawasee River in Midland County about 150 miles north of Detroit reached unprecedented levels. A spokeswoman for the county said the river was nearing 35 feet this afternoon and was slated to crest at the historic level of 38 feet around 8 p.m. EDT.

Gov. Gretchen Whitmer (D) warned that Midland, the county’s largest city and home to a large Dow Chemical Co. facility along the river’s banks, would be swamped by floods.

"In the next 12 to 15 hours, downtown Midland could be under approximately 9 feet of water," she said in a press conference last night. "We are anticipating an historic high water level."

The problem was compounded by the failure of the Edenville Dam, a 54-foot-tall hydropower facility with a history of noncompliance with safety measures. Its operating license had been revoked by regulators in 2018 due to concerns about whether it could handle a significant flood event.

The area along the river frequently floods, said Selina Tisdale, community affairs director for the city of Midland. But this year’s deluge — the area received 3 to 5 inches of rain in the 48 hours before the dam breach — is unlike anything they’ve seen before.

"This is historic for us. People think they’ve dealt with the same flood over and over again, but these are bigger floodwaters than we ever could have imagined," she said. "I think if people underestimated or thought they knew what they were dealing with, this may have caught them a little off guard."

Emergency responders went door to door yesterday warning residents living near the dam of the rising water. Some residents were able to return home, only to be told to leave again following the dam’s breach several hours later. The evacuations include the towns of Edenville and Sanford, and parts of Midland, according to Tisdale.

"We are starting to experience a little bit of having to go out and rescue folks, but for the most part, we’ve had a lot of evacuees," Tisdale said.

She added that the COVID-19 pandemic is making flood response even more difficult.

First responders, Tisdale said, are "to the extent possible, trying to manage with social distancing."

President Trump said his administration is monitoring the floods and has deployed military and Federal Emergency Management Agency teams.

"Our brave First Responders are once again stepping up to serve their fellow citizens, THANK YOU!" he tweeted.

Despite media reports that both have been breached, Tisdale said only the Edenville Dam has failed, and Sanford, which sits 7 miles downstream, has been overtopped by the rising river levels.

Both are hydropower facilities. Edenville was built in 1924, and Sanford a year later. Both are owned by Boyce Hydro Power LLC, which acquired the dams’ licenses in 2004.

The Federal Energy Regulatory Commission had warned the previous owners of Edenville that the dam needed increased spillway capacity and other safety measures in case of major floods. The dam, which impounds Wixom Lake, is rated a "high hazard," meaning a failure would likely result in the loss of human life and property.

In 2018, FERC revoked the operating license for the dam due to ongoing noncompliance issues.

Boyce Hydro Power "has shown a pattern of delay and indifference to the potential consequences of this failure, which the Commission has found must be remedied in order to protect life, limb, and property," the commission said in an October 2018 order.

Boyce Hydro Power was in the process of selling the dams this year.

The dams were inspected in 2018, and regulators recorded Edenville in "unsatisfactory" condition. Sanford received a "fair" rating.

Efforts to reach Boyce Hydro Power, which is based in Midland and owns two other dams in the area, as well, were unsuccessful.

According to photos, it appears the earthen embankment of the dam failed, said Mark Ogden of the Association of State Dam Safety Officials.

Ogden didn’t know details about the breach, but he said the failure is symptomatic of problems arising at the country’s aging dams. There are more than 90,000 dams across the country of varying size and purpose. By 2025, 70% of them will be at least 50 years old, near the end of their engineered life spans (Greenwire, March 6, 2017).

It’s unclear how flooding in Midland is affecting Dow Chemical’s headquarters and chemical plants located alongside the Tittabawassee River, where DuPont and Corteva Agriscience also have operations.

The company today said it has fully activated its emergency operations center and is implementing its flood preparedness plan. Dow said all of its operating units on-site have been safely shut down, except for facilities needed for managing chemical containment, and all rail cars are secured.

But Dow also noted that floodwaters were presenting a challenge.

"At approximately 10:00 a.m. Eastern, it was confirmed there were flood waters commingling with on-site containment ponds," wrote Kyle Bandlow, a spokesman for Dow. "We immediately partnered with the U.S. Coast Guard to activate emergency plans."

Dow has said only essential staff are on-site to monitor and manage the situation, with no reported employee injuries. "We will continue to engage with our site tenants and Midland County officials and take immediate action to ensure the safety and security of our employees, community and the environment," wrote Bandlow.

Dow began operating in Midland, where more than 1,000 organic and inorganic chemicals were produced, in 1897. As a result, dioxins and furans were byproducts from the facility and contaminated the Tittabawasee River. EPA initiated a cleanup plan for the Superfund site along the river in 2015.

Nick Dodge, a spokesman for the Michigan League of Conservation Voters, said he’s concerned about both the floodwaters and the spread of contaminants from the Tittabawassee River.

"This river historically has undergone years of contamination, illegal dumping from Dow, which is headquartered in Midland, and it’s one of the most contaminated rivers in Michigan because of those years of pollution," Dodge said. "We’re really concerned about not only the flooding and high water levels at Dow’s facilities, but what the impact is going to be from the river and contaminants being spread into surrounding areas."

A 1960s nuclear research reactor is also located at Dow’s complex, prompting the Nuclear Regulatory Commission to issue an "unusual event" notice today due to the flooding. The reactor, according to NRC, had been shut down due to the pandemic.

Nick Assendelft, a spokesman for the Michigan Department of Environment, Great Lakes and Energy, said agency staff are in the Midland area and that Dow has deployed its emergency measures and is securing its facilities.

"EGLE is in contact with the facility operators and EGLE and the U.S. Environmental Protection Agency are standing by as backup assistance should Dow determine that they are needed," he said. "EGLE is also reviewing which sites of contamination in the area have been impacted by the flood to determine next steps."

Midland, with a population of 42,000, sits about 8 miles downstream from the Sanford Dam and faces an especially serious flooding threat. Dow Chemical’s main plant sits on the city’s riverbank.

Further down the Tittabawassee River, communities in Saginaw County were on alert for flooding, with a flash flood watch in effect today.

Whitmer declared a state of emergency for Midland County and urged residents threatened by the flooding to find a place to stay with friends or relatives or to seek out one of several shelters that opened across the county. She encouraged people to do their best to take precautions to prevent the spread of the coronavirus, such as wearing a face covering and observing social distancing "to the best of your ability."

"This is unlike anything we’ve seen in Midland County," she said. "If you have a family member or loved one who lives in another part of the state, go there now."

Tisdale, the city’s spokesperson, told E&E News that officials are in various stages of evacuating 10,000 people from the city of Midland — which makes up half of the county’s population — to shelters set up in schools and community centers throughout the area.

About 130 to 150 evacuees are currently sheltering at Midland High School, she said. Michael Sharrow, superintendent of Midland Public Schools, tweeted out photos of evacuees trickling into the gymnasium.

Tisdale said there have been no fatalities.