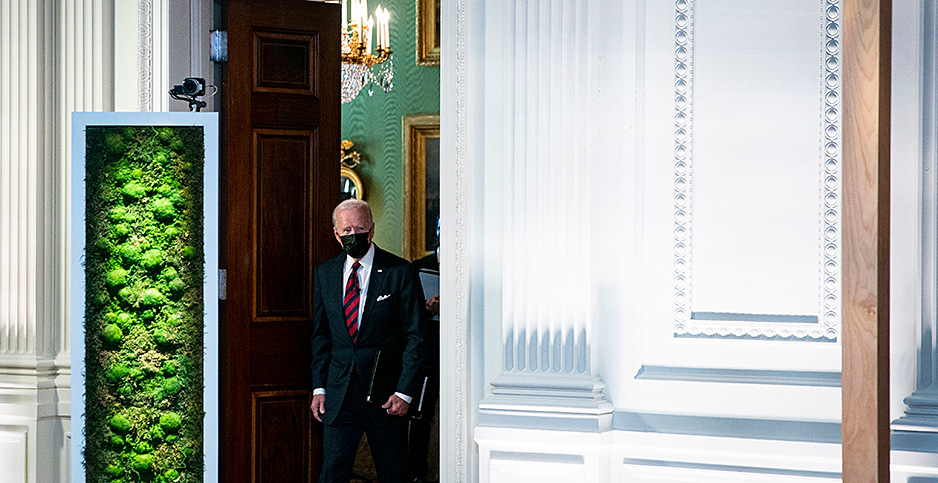 The United States plunged back into the climate fight yesterday, shaking off years of denial and embracing steep cuts to carbon emissions that scientists say might keep global warming in check.

"This is the decisive decade. This is the decade we must make decisions that avoid the worst consequences of the climate crisis," President Biden said at a virtual climate summit attended by the leaders of three dozen countries.

But Biden’s plea, and his new climate plan, didn’t propel many of the world’s major contributors of greenhouse gases into action. China, the top emitter worldwide, resisted diplomatic pressure to reduce its carbon output over the next 10 years. So did India, Russia and Australia. That raises the likelihood that atmospheric temperatures could eventually exceed 2 degrees Celsius, a point at which scientists say the world faces dangerous forms of ecological distress.

At yesterday’s White House summit, leaders from developed economies sought to highlight — often with few details — their emissions reduction targets, while less wealthy nations focused on how much they’re already being affected by intensifying droughts, storms and rising seas.

Waskow said he saw the summit as a return to the global stage for the United States following four years of overt climate change denial under former President Trump. The event also laid the groundwork for, potentially, stronger action by other nations ahead of a U.N. climate conference in Scotland later this year.

Japan and Canada used the White House event to put forward enhanced plans to decarbonize their economies, and the European Union and United Kingdom reiterated more ambitious targets they had locked in earlier in the week. While South Korea didn’t set a new carbon target, it did pledge to end public financing for new overseas coal-fired power plants.

The United States announced yesterday that it would cut its planet-warming emissions 50% to 52% by 2030 from 2005 levels. That puts it squarely on track to meet the goals of the Paris climate agreement, which aims to limit global warming to 1.5 C compared with preindustrial levels.

The challenges of achieving that target are steep: It will require seismic shifts in the economy to reshape American transportation and electricity systems.

Some green groups said the United States could go further still. Climate Action Tracker, which monitors countries’ emissions reduction targets, said that while the U.S. carbon goal represents "major progress," it still falls 5 to 10 percentage points short of what’s needed to avoid the worst impacts of climate change. Other environmental groups were disappointed that Biden didn’t provide a timeline for phasing out the use of fossil fuels.

"We expect more from a president who has repeatedly listed climate change as one of his top priorities," Greenpeace USA Climate Campaign Director Janet Redman said. "Efforts to reduce emissions without phasing out fossil fuel production only perpetuate the racist health impacts of fossil fuel pollution."

U.S. climate envoy John Kerry acknowledged in a briefing with reporters that there was skepticism from world leaders who questioned whether Biden’s promises would endure.

"You destroyed your credibility; you left the Paris Agreement. How can we trust you?" Kerry said, referring to the questions other leaders have been asking him.

Kerry also acknowledged that key parts of Biden’s strategy would rely on executive orders, which can be undone by a future president. He said the administration is focused on spurring market shifts in clean energy and electric vehicles, which would be harder for a president to roll back.

"No politician, I think, can change what is now happening in the marketplace," Kerry said.

Ensuring that the world is aligned on climate will be necessary to avoid the worst ecological and economic impacts, U.S. officials said yesterday.

"There are many issues on which we don’t all see eye to eye," said Secretary of State Antony Blinken. "This is not one of them."

How and when that alignment happens makes a difference.

Chinese President Xi Jinping said his nation, a leader in both clean energy and coal production, would phase down coal consumption in its 15th five-year plan, which starts after 2025. But he didn’t go beyond a plan announced last year that aims to peak carbon emissions before 2030 and achieve carbon neutrality by 2060.

India also didn’t make any new commitments, saying instead that it is doing its part through an ambitious plan to produce 450 gigawatts of renewable energy by 2030. An announcement by Prime Minister Narendra Modi that the United States and India are partnering to mobilize investments in clean energy offered some promise, but it was short on details.

Japan set a goal of reducing emissions 46% below 2013 levels by 2030, a significant increase from its previous 26% target. It did not, however, announce new climate financing commitments or say whether it would reduce funding for coal-fired power generation, disappointing many observers who had been calling for such action.

Canada, another country whose updated target was highly anticipated, set a goal of cutting carbon output 40% to 45% below 2005 levels by 2030, putting it "out of step" with the U.S., the Natural Resources Defense Council argued in a blog post that said it also demonstrated "a failure to come to grips with the long-term trajectory of its tar sands sector in a world transitioning to clean energy."

Among the strongest pledges was the European Union’s 55% reduction, which was codified into law on Tuesday. The United Kingdom boosted its target to 78% below 1990 levels by 2035, and yesterday, British Prime Minister Boris Johnson said rich nations should exceed the $100 billion initially pledged to the Green Climate Fund.

"It’s vital for all of us to show that this is not some expensive, politically correct green act of bunny-hugging. This is about growth and jobs," he said.

Russian President Vladimir Putin made a vague promise to "significantly reduce the net accumulated emissions in our country by 2050." Russia is the world’s fourth-largest emitter and has an economy highly reliant on the production of fossil fuels. Putin did not mention a new pipeline, Nord Stream 2, which is nearly complete and will bring Russian gas to Germany as well as throughout Europe.

Australia’s current pace of decarbonization lags far behind those of other top polluters and would see an emissions cut of just 26% to 28% below 2005 levels by 2030. Prime Minister Scott Morrison, who has long been an ally of the coal industry and a critic of climate policy, did not make any new emissions pledges other than to "update" the country’s long-term emissions goals later this year.

"Our goal is to get there as soon as we possibly can, through technology that enables and transforms our industries, not taxes that eliminate them, and the jobs and livelihoods they support and create, especially in our regions," Morrison said.

Waskow of the World Resources Institute said Australia was one of the biggest disappointments of the day.

"This notion that you can somehow talk about net zero in this fuzzy way … doesn’t provide any level of comfort about the Australian government’s commitment," he said.

Brazil also offered vague targets, with President Jair Bolsonaro shifting the blame for global warming to the world’s other major economies and saying his country accounts for 3% of global emissions. He also said Brazil would do more, but only with funding from other countries.

"There must be fair payment for environmental services provided by our biomes to the planet at large as a way to recognize the economic nature of environmental conservation activities," he said.

Bolsonaro has mocked climate science and overseen a dramatic increase in the deforestation of the Amazon rainforest, which has been nicknamed "the lungs of the world" and is responsible for a significant uptake of the world’s carbon dioxide.

Talk of finance loomed large at the summit, with several leaders pointing to the need for developed countries to increase their climate ambition and make concrete efforts to help developing countries accelerate the transition to cleaner economies.

South Africa and Indonesia, both large economies and emitters, committed to do more if more financing is made available.

The United States announced that it would double its annual amount of climate financing to developing countries relative to the average level during the second half of the Obama administration and triple its adaptation funding by 2024 (see related story).

There were also calls for carbon pricing, for debt forgiveness and for a greater share of climate financing to be put toward adaptation, something that countries most vulnerable to climate change say is necessary for them to cope with the climate challenges they’re facing today.

"Too often, vulnerable countries hear the excuse that steep emissions cuts are too costly, but political signals, especially from the major economies, shape decisions on investment and innovation for low-carbon pathways. Now is the moment for this signal to be unequivocal," said David Kabua, president of the Marshall Islands.

"If peak emitters fail to act, we feel the effects of climate change now."