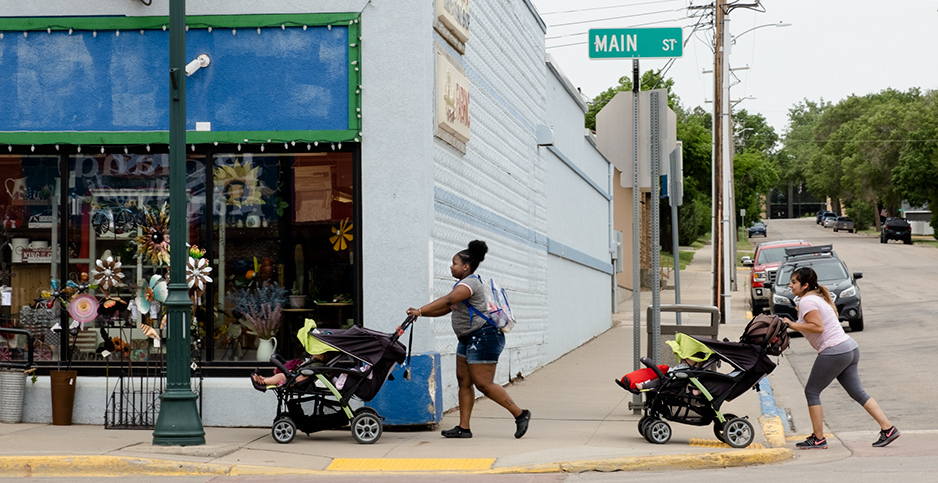 WATFORD CITY, N.D. — Even for a pandemic, Main Street is quiet, maybe the quietest it’s been during the decade of furious construction that built western North Dakota’s Bakken oil fields into the second largest oil-producing region in the nation.

In recent years, Watford City added hundreds of new apartments, a new high school and elementary school, a hospital, a law enforcement center, a sewer plant, a highway bypass, and even a community-built nonprofit day care. And, of course, an $83 million event center on a hill east of town, financed in part with a penny sales tax and an aggressive monthly repayment schedule that had many here nervous as oil prices began collapsing this spring and as the pandemic kept people from stores.

Both events have tested Watford City’s vision of itself as a livable, small-town community that was able to find creative solutions to manage its growth from 1,744 people in the 2010 census to an estimated 7,835 last year. Williston, 47 miles north, also saw its population nearly double to 29,033 during the same period.

"There are constant reminders of the fragile balance between seizing an opportunity and overextending. It’s definitely a balance," said Vawnita Best, Watford City’s community development director. "When you are North Dakota and have lived in a commodity-driven economy, you know that there are fluctuations and ups and downs, so you prepare for the difficult years and the lean times."

Now, Watford City is waiting to see just how lean the times will be.

Since March, oil companies have shut in 7,500 wells across the state and all but ceased new drilling. Oil production dropped from 1.2 million barrels to 858,000 in May, the lowest production since June 2013. More than 10,000 oil field jobs vanished, a number that could grow as the federal Paycheck Protection Program ends.

"I wish I could wake up and this was all over," said Christie Blaton, 49, as she handed out free sack lunches at the elementary school in late June.

She and her daughter arrived in Watford City in 2014 from California, after her husband, Richard, 52, got a job driving water trucks for an oil field services company. Blaton landed a job in the school cafeteria. She and her daughter were exactly what Watford City’s leaders wanted as it grew: families who would stay, not just the itinerant workers who accompany all energy booms.

Like thousands of truck drivers in the oil fields, Blaton’s husband lost his job this spring. The state of North Dakota gave the school district money to expand its free school lunch program into the summer this year, so Blaton has an unexpected summer job handing out brown-bag meals to 130 needy families each day.

Her husband is collecting unemployment while he looks for work, but they lost their health insurance through his old job. Blaton, a diabetic who has had thyroid cancer and must take daily medication, got three months’ worth of insulin and thyroid medication prescriptions before her insurance coverage ended. So far, they haven’t had to dip much into the money they’ve been saving for a down payment on a house. Without that job, she’s not sure what they would do.

One of her co-workers at the school district left town when her husband lost his oil field job. At least four families in her apartment complex are gone — back to wherever "home" is.

A few blocks away, people in cars lined up in the parking lot of a Lutheran church for jugs of milk and boxes of food and diapers at a weekly food pantry supported by the Department of Agriculture extension office. Many cars had out-of-state plates from other oil patch places: Texas, Colorado, Wyoming and New Mexico.

"There are thousands of us," said Tim Sandahl, 54, who in late June was picking up groceries for his family of four kids, including an 8-month-old baby who needs size 3 diapers.

He’s a relatively new arrival from Colorado. When he lost his job managing facilities at a pipeline company, he had his family join him in Watford City. Wages are still higher in North Dakota than in Colorado, and Sandahl couldn’t afford to support two households anymore. So he figured his chances were better at landing a new job in North Dakota, where wages are higher and the cost of living slightly lower.

He’s never been without a job before, and he did not expect to find himself in line for free groceries.

"That’s a shock to the pride, no doubt, but I’ve got a family, a fairly sizable one," Sandahl said.

Oil prices have climbed out of negative territory but still hover at around $40 a barrel. North Dakota State University in May released a bleak economic forecast into early 2021. The report predicted the state would see salaries and wages drop, "a decrease in the labor force, an increase in the unemployment rate, a decrease in gross state product," and, most alarmingly for a state that runs on oil taxes, "a decrease in total tax collections."

"Predictably, the North Dakota economy does not react favorably to sharp decreases in the price of oil," wrote Jeremy Jackson, the economist who authored the report. In an email, he warned that municipal governments dependent on sales tax revenue, like Watford City, could face especially hard times.

Justin Voll shrugged off what he sees as gloomy talk of an extended downturn during an interview in his office overlooking Main Street. "We’ve been through ups and downs before," said Voll, the president of First International Bank and Trust, Watford City’s hometown bank.

"This isn’t the end of oil and gas production in the Bakken," said Joel Brown, who runs a business helping mineral owners project earnings. He also serves as president of the McKenzie County Job Development Authority and is running for a seat on the county commission. Watford City is the biggest town in McKenzie County, which sits on the Montana border.

But this downturn is unprecedented for its one-two punch of pandemic and price crash.

Lynn Helms, the director of the North Dakota Oil and Gas Division, called the second quarter of 2020 a "five-alarm fire" for the state. It’s worse than the downturn of 2014 and 2015, and it rivals the state’s 1986 crash, he said.

If the Dakota Access pipeline shuts down permanently, that would make oil in the state more expensive to produce and not worth the continued investment. It’s unlikely North Dakota will return to pre-pandemic production levels for another year, Helms said. And that’s not certain, either.

"I’m not sure the world is ever going to return to pre-COVID numbers," Helms said.

In Watford City, the lull of 2014 and 2015 was seen as a time to catch up to its goal of building the sort of town that people would choose to stay in and raise a family.

Watford City offered developers incentives to build not just apartments but single-family homes, in the hopes that people who put down roots in the city would want to stay, even if times got tough. It built affordable housing so that teachers, police and nurses could pay rent.

"That’s the goal of the town, to be a home for the people who live here," Voll said.

Back in September 2019, it looked as though Watford City might have found the formula for beating the boom-and-bust cycles: Build as much as possible while you can, so that the infrastructure exists for a stable future.

Watford City hosted the Bakken Backers meeting, an annual gathering of western North Dakota’s biggest oil boosters. One by one, community leaders took the stage in the auditorium at the new high school. There, they rattled off the creative ways Watford City has thrived over the past decade.

They were especially proud of the day care, aimed at attracting working families with children to Watford City, especially young teachers. Watford City had an acute labor shortage in the retail business, schools, health care, restaurants and other businesses that support the main workforce. Many spouses or partners of the mostly male oil field workforce were unable to work because they had no child care. That meant it was difficult to expand the secondary economy.

The city, in partnership with the school district, in 2014 opened Wolf Pup Daycare for 190 children. Because the prevailing wages are so high in the area, it recently began paying day care workers a starting salary of $18 an hour, a wage supplemented by sales tax receipts. And until the oil downturn, the community had plans to build a second location of the day care at the new elementary school, also built to accommodate the town’s growth.

For nearly everyone in the room, there seemed no end in sight for the Bakken, no end in sight for oil. There was mild worry that day in September about a drone strike on oil infrastructure in Saudi Arabia but no hint of the price war to come with Russia. Mostly, the Bakken Backers talked about increasing natural gas pipeline capacity to reduce methane flaring and how to retrieve even more oil from older wells.

"One of the big challenges is: How do we get more oil out of this rock?" Ron Ness, president of the North Dakota Petroleum Council, said at the gathering.

Now, fleets of the ubiquitous white Ford F-150 pickup trucks that bounce around the Bakken sit unused in the parking lots of oil field services companies. More than even the pumpjacks that have slowed to a halt across the state, Ness said, those trucks represent lost jobs.

"Every one of those trucks has a person or two," Ness said.

Best, the city’s community development director, continues to be upbeat, although she was disappointed that plans for a second day care had to be shelved.

"Honestly, I don’t think that the community feels like it’s a long-term downturn," Best said. "We have to look at these times as opportunities to reinvent and pivot a little. There will definitely be a period of transition of recovery."

Blaton, the school cafeteria worker, said she and her husband hope to stay in Watford City. They’ve been saving money for a 10% down payment on a house. Home prices start at $325,000 in Watford City — materials are expensive far from manufacturing centers, and construction workers can make more money in the oil fields.

She said she still hasn’t embraced North Dakota winters, but she loves Watford City’s small-town friendliness. Neighbors and even people driving down the road always wave hello. "I fell in love with the town," she said.

‘I think we’ve got hope’

Small town ties have helped keep many businesses afloat in North Dakota during the pandemic, in part with the support of community banks. A Washington Post analysis found that, per capita, North Dakota banks secured more Paycheck Protection Program money in the early rounds of funding than most other states. The success was credited in part to the efficiency of the state-owned Bank of North Dakota, which served as a clearinghouse for information.

For Watford City’s hospital, new in 2018, the PPP money "has truly been a lifesaver," said Daniel Kelly, the CEO of McKenzie County Healthcare Systems. The bank got $2.6 million. It kept 200 employees earning paychecks even as most nonessential services ground to a halt, a severe blow to the health system’s income stream.

"That’s very important to a small community like Watford City," he said. "Because if we had to lay off a significant number of folks, that would have had residual impact upon other businesses in the community, which to a degree are already hurting given the downturn in oil."

That money, a loan that will turn into a grant, has run out. The hospital is not sure what it’ll do next. Regular procedures and appointments are resuming, but like everyone in Watford City, the hospital system continues to wait.