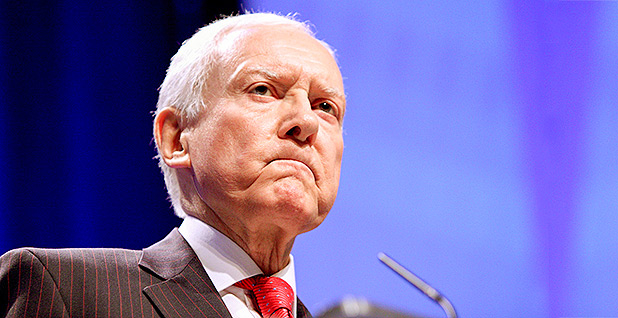 Senate Finance Chairman Orrin Hatch (R-Utah) is skeptical that a tax extenders package will move before the end of the year. Photo by Gage Skidmore, courtesy of Flickr.

With an all-GOP federal government on the horizon, several Republicans are downplaying the chance that Congress might pass tax extensions this year for "orphaned" renewables and clean energy technologies left out of last year’s budget deal.

The likely vehicle for extensions in the lame-duck session would be an expected continuing resolution to keep the government running after Dec. 9.

"There’s always a push for tax extenders, but I just think they want to start anew and see what they can do the first of the year," Senate Finance Chairman Orrin Hatch (R-Utah) said yesterday, referring to the coming administration of President-elect Donald Trump. "It’s up to Sen. [Mitch] McConnell, but I doubt it."

A senior GOP leadership aide also downplayed the chances, saying the expansion of renewable breaks has a limited constituency. The aide also noted GOP leaders were not eager to do any favors for one of the biggest backers of the renewable breaks — outgoing Senate Minority Leader Harry Reid (D-Nev.).

Advocates for everything from fuel cells to small wind turbines have been pushing all year for extensions of expiring tax credits that they say are critical for growth of their industries. Last year, Congress extended credits for wind and solar in a deal to end the oil export ban, but the deal did not cover other clean energy technologies.

Yesterday, several groups left out of last year’s omnibus package said at a Washington news conference that allowing the tax breaks to expire could cause sales in their industries to collapse by 50 percent or more.

"It’s really an issue of fairness. What Congress did last December was pick a winner and loser," said Doug Dougherty, CEO of the Geothermal Exchange Organization.

It would have been preferable if Congress had eliminated all subsidies, as everyone would be on the same playing field, said Dougherty, arguing that if Congress does not act, there could be significant job losses in his industry.

To Trump, Dougherty said "this is a unique technology adopted by a lot of people that voted for you," considering the industry’s reach in the Midwest.

Many of the affected technologies are manufactured in the United States, added Billie Kaumaya, federal legislative director at National Association of Home Builders.

Curt Beaulieu, a senior counsel at Bracewell, said that geothermal heat pumps are in a "triple whammy" because their current credit in one part of the tax code allows the technology to qualify for other benefits such as a five-year depreciation.

Separately, a coalition of coal companies and environmental groups are pushing for renewed tax credits for carbon capture and sequestration technology. Those renewed tax credits also likely would have to be part of a continuing budget resolution if they happen this year.

The tax credit, known as 45Q, is facing a credit cap that is holding back projects, the groups say. The credit needs a higher value, and a change in its requirements to include more potential developers and allow projects that store less than 500,000 tons of CO2 annually, they say (E&E Daily, Feb. 4).

There are competing bills in the House and Senate to expand 45Q. The Senate language, sponsored by Sen. Heidi Heitkamp (D-N.D), also is backed by McConnell, the Kentucky Republican and majority leader, and Democrats vocal on climate action like Rhode Island Sen. Sheldon Whitehouse.

This month, the Global CCS Institute and International Energy Agency said that the technology needs to be deployed much faster if the world is to prevent temperatures from rising to dangerous levels (Greenwire, Nov. 15).

Yesterday, Heitkamp said she was "guardedly optimistic" that expanded CCS credits could move in the lame duck.

"We’ve done the legwork, which is always critical. You can see how incredibly diverse our … sponsorship is, Heitkamp said. "I always tell people in this place, if there’s a will, there’s always a way."

But another backer of the Senate bill, Sen. Shelley Moore Capito (R-W.Va.), said that "hopes are fading" for expansion of CCS credits by the end of the year.