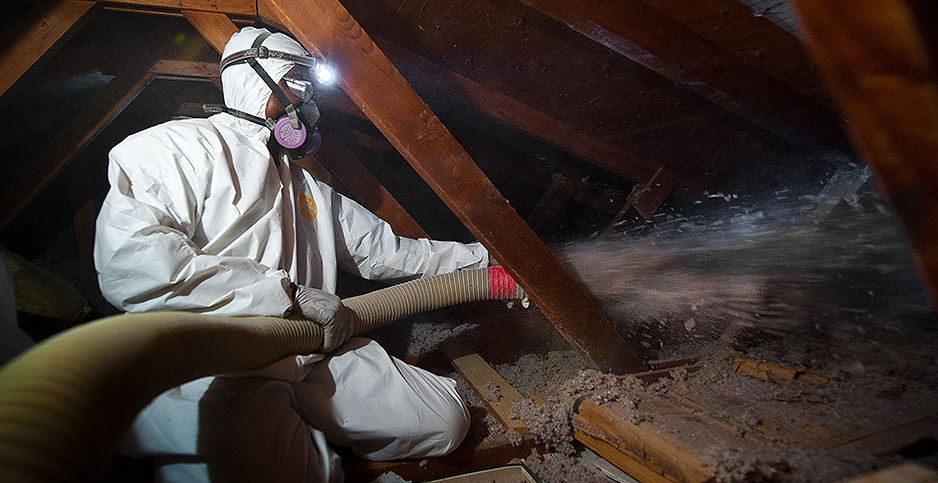 A worker weatherizing a home to achieve higher efficiency levels. Department of Energy

The energy efficiency sector — the nation’s largest source of energy jobs — is experiencing mass layoffs from the coronavirus as utility and state programs shut down across the country, according to contractors and industry representatives.

Utilities and state energy agencies have halted programs that help homeowners and business owners pay for new installations and building retrofits. The Department of Energy has encouraged local nonprofit grantees, some of which contract out to small third-party companies, to suspend or "severely limit" low-income weatherization activities, with the vast majority of grantees electing to do so, according to a recent DOE notice.

State governors have also in some cases shut down in-person construction work, which accounts for about half of the industry’s workforce. Nearly all residential projects are on pause nationwide, according to several industry associations.

The pandemic has also halted programs run by many of the country’s largest utilities, both for residential and commercial customers.

In California, a ratepayer-funded rebate program for multifamily buildings run by the city of San Francisco and several county governments has stopped sending teams for in-person appointments, for example.

In the Southeast, spokespeople for Duke Energy Corp. said the utility has suspended all of its efficiency audits and home weatherization repairs.

The utility suspensions have affected people like Shane Matteson, operating manager for Georgia-based Energy Consulting Services, which does energy audits for residences in the Atlanta area and gets about 60% of its business from Georgia Power.

"People don’t want us in their house," he said. "I had to lay off pretty much everybody."

On Friday afternoon, Matteson said he was preparing his application to the payment protection plan, which he hoped would allow him to rehire.

"It’s a huge thing for us small-business owners," he said. "It’s allowing us to tread water — assuming that this thing is over in eight weeks."

Similarly, Adam Procell, president and chief executive of New Jersey-based Lime Energy, said the suspension of utility rebates has slashed demand from small businesses for building retrofits across all 12 states where Lime operates. Those include the Northeast, Texas, California, the Carolinas and the Midwest.

Even in states where governors haven’t issued lockdowns, he said, most utilities want to avoid the risk of workers infecting a customer. Lime has furloughed about 200 employees — about two-thirds of its workforce.

Contractors and advocates say the wave of utility program suspensions is still cascading across the country, although none provided a precise estimate of how many power companies have decided to take actions.

"It seems to vary by state or region, but it is moving quickly," said Ben Evans, vice president of government affairs and communications at the Alliance to Save Energy.

"I think people underestimate the size of the workforce," he added. "If the work doesn’t occur … it’s going to spread throughout the economy."

There are also concerns about the impact of the industry shutdown on greenhouse gas emissions, considering that more than a quarter of emissions come from the electricity sector.

Currently, the pandemic is shrinking greenhouse gas emissions in much of the world, but if the efficiency industry continues to reel, it could offset some short-term decreases in emissions, analysts say.

"If we don’t put the right policies in place and we have a long-term recession in the energy efficiency sector, then that’ll have profound consequences on emissions," said Evans.

The energy efficiency industry had entered this year with a sunny outlook. In 2019, it produced more new jobs than any other energy sector, adding 54,000 jobs nationwide, according to the "2020 U.S. Energy & Employment Report" from the Energy Futures Initiative and the National Association of State Energy Officials. Employers in energy efficiency construction said then they thought the rate of job growth would rise this year, from 2.3% to 3.6%.

Along with utilities and state agencies, the federal government is a driver of projects, partly through DOE’s Weatherization Assistance Program, which received more than $300 million in fiscal 2020. The Trump administration has repeatedly called for eliminating the program, saying in budget documents that the Department of Energy should be focused on "early-stage research."

The federal government’s presence as a driver of demand for efficiency retrofits, while smaller than that of utilities, is also taking a hit. In addition to the voluntary suspensions by DOE grantees, at least 19 states have shuttered federal weatherization work, according to the American Council for an Energy-Efficient Economy.

Federal grantees had three years to use funds appropriated under weatherization programs, and DOE made alterations that have created greater spending flexibility due to the coronavirus pandemic, noted Eric Behna, policy and communications manager at the National Association for State Community Services Programs. The organization’s membership consists of state directors of DOE’s low-income weatherization program.

"We do not have concerns about the funds being impounded at this time," Behna wrote in an email yesterday.

Congress has extended one major lifeline to some contractors through the recent stimulus package, which allows businesses with fewer than 500 employees to apply for low-interest loans to keep workers on payroll for eight weeks. The loans can also be forgiven if that term elapses.

The paycheck protection program, as it’s known, opened late last week amid anxiety from lenders about how long it would take to process a deluge of applications.

But she and other industry representatives said they are seeking to convince federal lawmakers to go beyond stabilizing the workforce and undertake a second stimulus package to jump-start future growth.

"We have to have one that addresses the economy after the pandemic is over," said Saul Rinaldi.

"It’s key to make sure that the demand for [energy efficiency] services is there after the pandemic lessens. That’s one of the challenges we’re looking at here," she added.

In a March 20 letter to Congress, E2, the clean energy advocacy group, called for an expansion of energy efficiency tax credits, increased funding for the Energy Department’s weatherization and research and development programs, and resurrection of a $3.2 billion efficiency and conservation block grant program from the 2009 stimulus.

"We need to follow what’s in that playbook," Keefe, E2’s executive director, said in reference to the previous stimulus.

However, even though energy issues remain in play for the fourth stimulus package, congressional leaders are far from agreeing on a path forward.

Evans of the Alliance to Save Energy said his group was reviewing policy ideas to present to its allies in Congress, including expanded incentives for homeowners and investors.

"We have some experience during [the American Recovery and Reinvestment Act of 2009] — there were some energy efficiency programs that did a good job of encouraging demand," he said.

Some contractors are also starting to think about how they might alter their protocols to keep workers safe when they’re able to restart.

"We don’t believe it’s going to be like a switch flipped back," said Procell of Lime Energy.