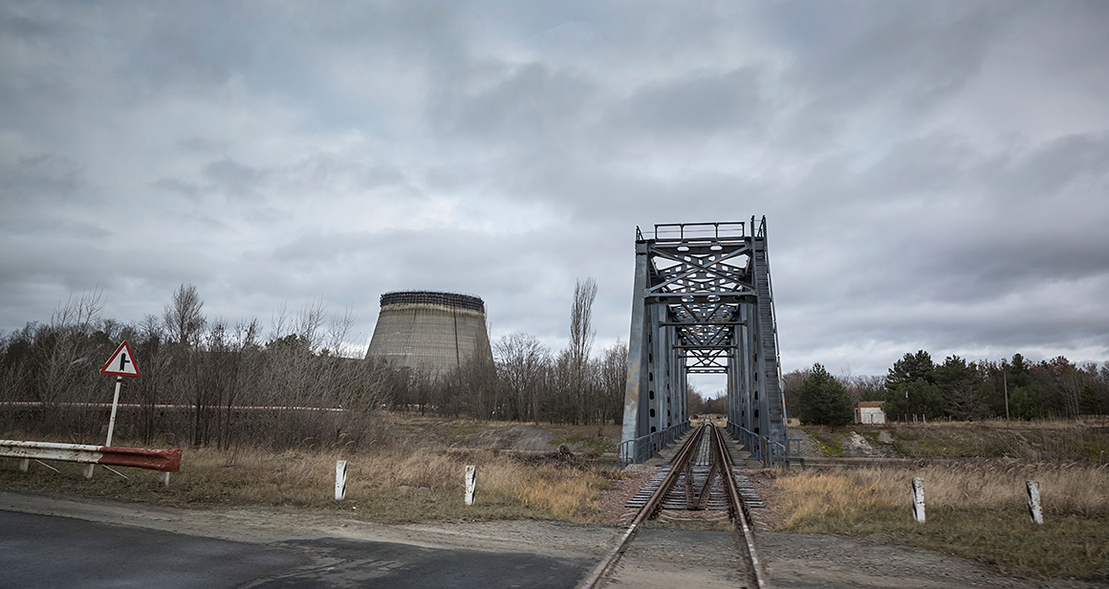 A view of the cooling tower of the Chernobyl nuclear plant site in Ukraine. Mykhaylo Palinchak /SOPA Images/Sipa USA/AP Images

For the first time in the 66-year history of commercial nuclear power, operators must manage the exacting safety systems of a massive reactor plant under the guns of an occupying army that is killing their fellow citizens.

The strain on the staffs of Ukraine’s offline Chernobyl nuclear facility and the operating Zaporizhzhia nuclear plant, both under Russian control, is a serious, growing issue, the head of the International Atomic Energy Agency in Vienna stressed yesterday.

“I remain gravely concerned about the extremely difficult circumstances for the Ukrainian staff there,” IAEA Director General Rafael Mariano Grossi said in a statement. The IAEA is receiving status reports from Ukraine’s nuclear regulator, which continues to oversee three of Ukraine’s four operating nuclear plants.

Two of the six reactors at the Zaporizhzhia plant were running yesterday under the direction of Russian operatives, including representatives of Rosatom State Nuclear Energy Corp., Russia’s state nuclear agency, according to reports from Ukrainian officials.

The plant has four high-voltage line links and a backup line. Two of the connections were damaged earlier in the Russian assault. One line and a backup remain connected and plant safety is not threatened, the IAEA said. However the plant had to reduce power to adjust to line outages, IAEA said. If all outside power is lost, vital reactor cooling processes would depend on emergency diesel generators.

In the Chernobyl case, 211 Ukrainian technicians and guards there were virtual prisoners inside the plant, working without relief “under enormous stress without the necessary rest,” IAEA said this week. The plant, wracked by a 1986 explosion, is now encased in a steel dome as workers dismantle it and safeguard its spent fuel.

To assure the safety of the occupied plants, the “operating staff must be able to [fulfill] their safety and security duties and have the capacity to make decisions free of undue pressure,” Grossi said in a statement Tuesday.

But a report this week in The Wall Street Journal based on text messages with Chernobyl’s Ukrainian staff and other accounts described a tense “hostage” situation that has deteriorated since Russian troops took over Feb. 24. The newspaper reported that workers, during brief calls, told family members of headaches, dizziness, nausea and extreme fatigue.

“I am very concerned about the operators’ health and well-being,” said Adam Stein, associate director for nuclear innovation at the Breakthrough Institute, which advocates for nuclear power.

“I consider that to be the primary risk at these plants at the moment. Due to undue stress and poor working conditions, the operators are definitely not able to perform their functions as well as normal,” he said.

Stein added, “What happens if reactor operators decide they are not going to work because of the conditions at the plant? That’s speculative, but it’s a concern.”

He also said there are concerns about workers’ ability to maintain facilities and make repairs.

Allison Macfarlane, former chair of the U.S. Nuclear Regulatory Commission, said the history of nuclear regulation in the United States shows the great importance of having highly trained staff committed to assuring system safety around the clock.

“You want nuclear plant operators to be at their best — not tired, not distracted. If they are worried about their families, or in Chernobyl’s case, not allowed to leave and reduced to eating dried porridge and canned food, they may miss things and make mistakes,” she said.

Over the years, NRC inspection and investigation reports have cited a limited number of examples of operator mistakes that jeopardized or undermined operation of safety systems that could be called on in emergencies, Macfarlane said.

While the NRC found nearly all of the 93 operating U.S. reactors met commission safety and security requirements in 2021, two fell short, according to an NRC report earlier this month. The findings were based on thousands of inspection hours, a commission statement added.

The two plants, Callaway in Missouri and Davis-Besse in Ohio, were cited for issues of “low safety significance,” but the NRC said their performance warranted special inspections to assure that corrective actions are taken to prevent recurrence.

“These plants are really complex. Safety culture [at U.S. nuclear plants] is regulated because we’ve deemed it really important,” added Macfarlane, who directs the School of Public Policy and Global Affairs at the University of British Columbia.

The NRC policy requires not just adherence to rules and procedures but management’s care to instill a commitment to safety, said Macfarlane.

“If you don’t have it, you will potentially have issues that could lead to major problems, a major accident,” she said.

NRC files reveal incidents like one in 2008, when two divers cleaning sludge from an underwater opening to water pumps at the Nine Mile Point plant in upstate New York lost control of a suction hose, allowing it to be sucked into a pump, fouling it. While there was no threat to operations, the NRC found “significant weaknesses” in the operator’s response to the incident.

The operator failed to require a rigorous planning process even though the underwater cleaning operation had never been done before. Contrary to expected practice, the divers did not immediately stop work when the incident occurred. Plant management was not immediately notified, according to the NRC’s investigation.

A senior official of the then-plant owner, Constellation Energy Nuclear Group, acknowledged to NRC officials, “[We] had missed some things we shouldn’t have missed. … We had tunnel vision to some degree. The fact we didn’t go into is why the event occurred.”

Edwin Lyman, director of nuclear power safety with the Union of Concerned Scientists, emphasized in a recent blog that maintaining the integrity of water pumps and other vital safety systems is essential to reactor security. Lyman said that if reactor cooling systems fail, fuel rods can begin releasing radiation within hours.

“There are a number of events that could trigger a worst-case scenario involving a reactor core or spent fuel pool located in a war zone,” Lyman said, such as an accidental or intentional strike that could that could directly damage reactors.

“A fire could disable plant electrical systems. Personnel under duress could make serious mistakes,” he wrote. He said any “extended loss of power that interrupted cooling system operations that personnel could not contain has the potential to cause a Fukushima-like disaster,” referring to what happened in Japan in 2011 (Energywire, March 14).

Separately, Ukraine yesterday made a long-planned move to cut ties with Russia’s electricity grid, linking instead with the continental European grid. Moldova’s connection to the European grid was also announced.

“This will help Ukraine to keep their electricity system stable, homes warm and lights on during these dark times,” Kadri Simson, the European Union energy commissioner, said in a statement. “It is also a historic milestone for the EU-Ukraine relationship — in this area, Ukraine is now part of Europe.”