Hot topics from Perry hearing, from ‘poo-poo’ to Drudge 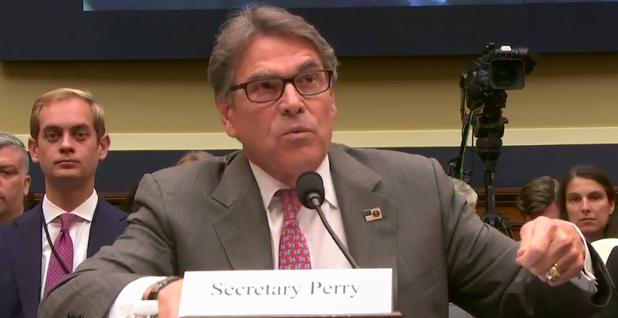 Rick Perry’s three-hour appearance on Capitol Hill yesterday was filled with testy exchanges, gaffes and comments about everything from "poo-poo" to the Drudge Report.

One congressman made reference to a Texas-sized pile of cow dung in attacking Perry’s critics. And Rep. Joe Barton (R-Texas) kept inviting the secretary to come eat barbecue in his office.

Perry said his job requires significant movement to visit DOE sites around the country, considering the distance of some national laboratories and invitations from lawmakers to visit their districts (Greenwire, Oct. 12).

He said there has been no legal violations and flights were disclosed properly. To Barton, he asked for permission to direct the agency to look back at former Secretary Ernest Moniz’s travel to see if current flights are "in line."

Barton defended Perry’s frequent use of Southwest Airlines on weekend trips to Texas, prompting Perry to joke about pictures of him reading the Drudge Report waiting for a flight.

In between the colorful rhetoric were policy discussions that could have long-lasting effects on the energy sector, including ideas for altering the government’s efficiency and technology programs.

Much of the talk centered around DOE’s proposal to boost coal and nuclear by altering energy market rules. A central question was whether there is or could be such a thing as a "free market" in energy regulation.

Perry has said past federal and some state regulations have unfairly put a finger on the scales of the energy market and that his plan, which would change market rules to compensate nuclear and coal plants, is simply an act of tipping those scales back.

"The idea that there is a free market in electrical generation is not a bit of a fallacy, it is a fallacy," Perry said yesterday. "Every state regulates the energy industry, it’s the reason we have a [public utility commission]. There are different phases, there are different states of regulation. Each state has to decide what is the best one."

Rep. Pete Olson (R-Texas) backed up Perry’s free-market credentials. "Attacks are coming that said you prefer government control over the free markets. We both know that’s a pile of Bevo longhorn poo-poo," said Olson, referring to the bovine mascot of the University of Texas, Austin.

"We both know, familiar with each other for 30 years in Austin, Texas, there’s been no bigger proponent of the free market for energy than Governor Rick Perry," Olson said.

But Perry’s take on the free market came up again in another quotable moment in which the secretary himself questioned the efficacy of a free market for energy.

Perry was asked by Rep. Paul Tonko (D-N.Y.) if DOE’s plan takes into account the costs for consumers, which some analysts have said could increase by billions of dollars per year if the Federal Energy Regulatory Commission were to follow DOE’s direction.

"I think you take cost into account, but what’s the cost of freedom?" Perry said. "What does it cost to build a system to keep America free? I’m not sure I want to just put that straight out on the free market and say ‘OK, whoever can build the cheapest delivery system here to keep America free.’"

Democrats on the committee were not buying it.

"I think they’re going to do great damage to America’s leadership on energy and really sock it to consumers and businesses on cost," Rep. Kathy Castor (D-Fla.) told E&E News after the hearing.

Barton, the panel’s former chairman and current vice chairman, told reporters after the hearing that work is continuing slowly on the first reauthorization of DOE. Chairman Greg Walden (R-Ore.) asked Barton to lead the review.

"The Republicans are ready to go. [Energy Subcommittee ranking member Bobby Rush (D-Ill.)] just asked for another member meeting, which we’ll do. So I can’t really get into details until we get a framework," Barton said.

Barton has said he wants to consider broad ideas for how DOE is organized but also that he wants reauthorization to be a bipartisan effort (E&E Daily, Sept. 28).

While the timeline for introducing his bill has been continually pushed back, Barton said he is aiming to get it done sooner rather than later.

"I want to get it on the president’s desk, which means we got to go subcommittee, full committee, and get the Senate to agree or do their own bill," he said.

At the hearing, Perry said he was in discussions with Barton about the future of the Advanced Research Projects Agency-Energy (ARPA-E), which the administration called for eliminating in its budget request.

Perry distanced himself from Trump’s views on the subject, telling Rep. Scott Peters (D-Calif.): "I didn’t write the budget. My job is to defend it, which from time to time is counter to what I think is good public policy."

Perry said, "This happens to be one of those." Innovation is the "real lifeblood of the country," and government does have a role for moving technology to commercialization, he said.

At the same time, he said there are discussions with Barton about changing the structure of ARPA-E.

"I think the ARPA-E program has its place. Does it need to be restructured? Chairman Barton and I [are] in a conversation about that at this particular point in time. … Is it called ARPA-E, or is it called something else?" Perry said.

Lawmakers asked Perry whether he agrees with U.S. EPA Administrator Scott Pruitt that current wind and solar tax credits should be eliminated. Pruitt called for ending the production tax credit for wind this week in Kentucky (Greenwire, Oct. 10).

Perry hedged on the issue, saying, "I can’t give you a yes or no."

"I can refer you back to what I said about my children. … At some point, you say you are on your own, you can stand or fall on the market. I would suggest to you that both the solar and wind industry is approaching that very mature stage," he said to Rep. Dave Loebsack (D-Iowa), whose state ranks second in the country for installed wind capacity.

Perry added that an industry can’t say it delivers baseload energy and yet needs to be treated as though it’s immature. It’s a "balancing act" to determine where subsidies should end, he said.

At another point, Tonko quizzed Perry about comments last week at the group Veterans in Energy that the Obama administration had "its thumb on the scale" favoring renewables.

Are you "upset" about the tax credits, Tonko asked?

Perry said no but added, "That doesn’t mean that everything Congress does I agree with."

The renewable issue is in the forefront because of ongoing discussions about tax reform in Congress, which would have to approve any changes to tax incentives.

Some conservatives are supporting rollbacks in the ITC and PTC, although other Republicans from wind- and solar-rich states support them.

Members also asked Perry several times about the federal Energy Star program, which is targeted for elimination by the White Hose and is jointly overseen by DOE and EPA.

Perry suggested he could support moving many of the program’s responsibilities out of EPA.

Under questioning from Rep. Bob Latta (R-Ohio) about whether he would support legislation doing that, Perry said, "That’s going to be your call," but added, "It makes abundant sense to me that [DOE] would be a good slot for it to reside in."

The national labs have the scientific ability to look at efficiency programs and can analyze them in a scientific way, the secretary said.

Earlier this year, Latta introduced a bill that would protect manufacturers from private lawsuits filed after an Energy Star product is disqualified because of DOE tests. Latta is working on legislation to move Energy Star to DOE, an aide said.

Perry has said he supports energy efficiency broadly, but many of his views remain unclear. In documents submitted to the Senate earlier this year, he pledged that in fiscal 2018, DOE would fund all necessary steps to finalize legally required efficiency standards and test procedures.

The hearing was the latest in a series where Democrats have pressed Perry on his views of climate change. This time the questioner was Rep. Jerry McNerney (D-Calif.), who framed the issue in terms of recent hurricanes.

"Do you think climate change is any way a threat to our nation?" McNerney asked.

McNerney followed, "Do you see a relation between the weather events we’ve had and climate change?"

He then told McNerney that the two men are likely to agree that climate change is happening and that it is having an effect on the globe.

"Where we may or may not agree is just how much of this is man’s fault and our decisions that we’re going to make here," Perry said. "I don’t believe climate change is 100 percent man’s fault."

Americans shouldn’t be making decisions based on climate assumptions that could put the country at a disadvantage, he added.

Perry has made similar comments about climate before, telling lawmakers in June there should be a "red team" review of climate science (E&E Daily, July 22).

But the exchange highlighted ongoing concerns among Democrats about the Trump administration’s moves on climate, including DOE’s shuttering earlier this year of its international climate office and the effect of DOE grid proposals on greenhouse gas emissions.

"It seems to me that the risk of climate change is bigger than the risk of reducing carbon emissions," McNerney said.