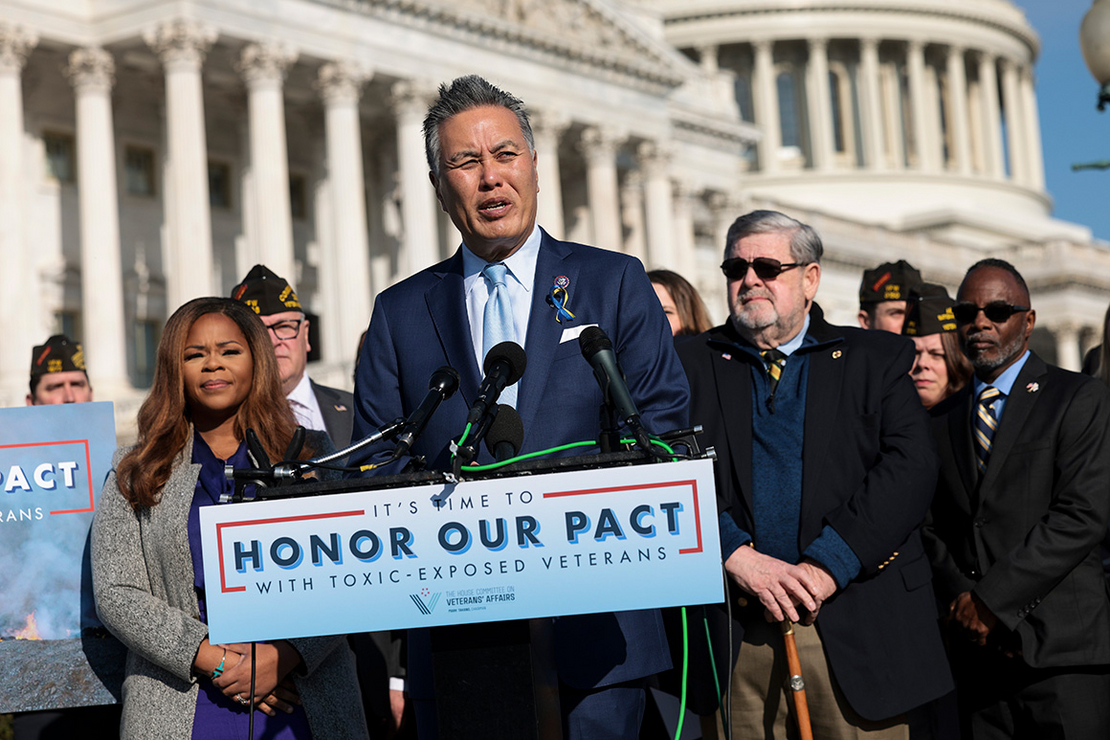 The House passed legislation today to deliver comprehensive health care and benefits to veterans affected by toxic exposure, after President Biden pressed Congress during his State of the Union address to take action on the issue.

The “Honoring Our Promise to Address Comprehensive Toxics (PACT) Act,” H.R. 3967, would significantly expand the list of “presumptive” conditions for veterans. Those are ailments that the federal government would presume are related to burn pits or other forms of toxic exposure. Veterans affected would be immediately eligible for Veterans Affairs health care and other benefits.

“We passed the most comprehensive legislation to date to treat toxic exposure as a cost of war,” House Veterans Affairs Chair and main sponsor of the bill Mark Takano (D-Calif.) said in a release. “I will not rest until our veterans have a guarantee in statute that their government will take care of them when they come home.”

Takano’s legislation passed through the House 256-174, with every Democrat and 34 Republicans voting in favor.

Currently, the Department of Veterans Affairs only lists three relatively minor conditions as presumptive. Takano’s bill would expand the list to 23 conditions, including several rare and debilitating cancers.

Burn pits, huge and constantly burning trash piles during the Iraq and Afghanistan wars, have been linked to severe conditions in soldiers who were exposed to their fumes (Greenwire, Nov. 11, 2021).

The bill would also require the VA to provide standardized training and conduct outreach to affected veterans and aims to improve health data collection, among other provisions.

The issue was put in the national spotlight on Tuesday when Biden dedicated a significant portion of his State of the Union speech to advocate for greater care for veterans affected by burn pits and to reference the effects burn pits may have had on his late son.

“When they came home, many of the world’s fittest and best-trained warriors were never the same,” said Biden. “One of those soldiers was my son Major Beau Biden.”

During his speech, Biden referenced a White House announcement on Tuesday that the VA would list nine rare respiratory cancers, most of which are also included in Takano’s legislation, as presumptive and later pushed Congress for action (E&E News PM, March 1).

“I’m also calling on Congress: Pass a law to make sure veterans devastated by toxic exposures in Iraq and Afghanistan finally get the benefits and comprehensive health care they deserve,” Biden said.

Despite its House passage, Takano’s bill faces an uncertain future. Republican support for the bill has been low because of its high price tag, with a recent Congressional Budget Office estimate putting the bill’s cost at over $250 billion over the next decade.

“The ‘PACT Act’ would spell disaster for taxpayers,” said House Veterans Affairs ranking member Mike Bost (R-Ill.) during a House Rules Committee hearing earlier this week. “Veterans are struggling to make ends meet; we are not doing right by them by failing to be fiscally responsible.”

Bost and most Republicans have argued that fast-tracking Senate Veterans Affairs Chair Jon Tester’s “Health Care for Burn Pit Veterans Act,” S. 3541, would be the best and most bipartisan solution to help veterans immediately.

The bill, which passed the Senate last month, would extend Veterans Affairs medical care eligibility for post-9/11 veterans from five years to 10 after their service (E&E Daily, Feb. 17).

But top Democrats have argued that Tester’s bill is insufficient to cover the breadth of problems burn pit veterans are facing and that Republicans are pinching pennies over taking care of sick veterans.

“Don’t even talk to us about the price,” House Speaker Nancy Pelosi (D-Calif.) said during a press conference yesterday regarding Takano’s bill. “I don’t want anybody bringing up the dollar amount because what we are looking at is the value of what this does for our country.”

Tester said his bill is one part of a three-pronged approach to get veterans the benefits they’re looking for, and that the more drawn-out method gives legislation a greater chance of being passed in the Senate.

Takano yesterday said he has not had any discussion with Tester regarding a potential compromise between the House and Senate legislation, but said he looks forward to working with Tester to get comprehensive legislation to the president’s desk.

Pelosi thanked Takano for incorporating H.R. 2192 from Rep. Matt Cartwright (D-Pa.), which would allow veterans and families exposed to toxic water at Camp Lejeune in North Carolina to sue the federal government for damages.

North Carolina Democratic Rep. Deborah Ross championed an amendment to require the Department of Defense to study sources of toxic per- and polyfluoroalkyl substances, or PFAS, beyond firefighting foam on military bases.

“Studies have shown that these dangerous toxicants are ubiquitous in the kinds of ready-to-make meal packages, textiles and cookware used on military installations,” said Ross on the House floor. “We must ensure that we fully understand the scope of PFAS exposure on military bases.”

Another PFAS provision would require DOD to train active-duty personnel on the dangers of PFAS exposure and increase eligibility for PFAS-affected veterans to enter a registry.

Lawmakers added a provision to create a VA presumption of exposure to radiation for veterans who participated in cleanup activities in Palomares, Spain, and Enewetak Atoll after nuclear accidents or testing occurred in those areas.