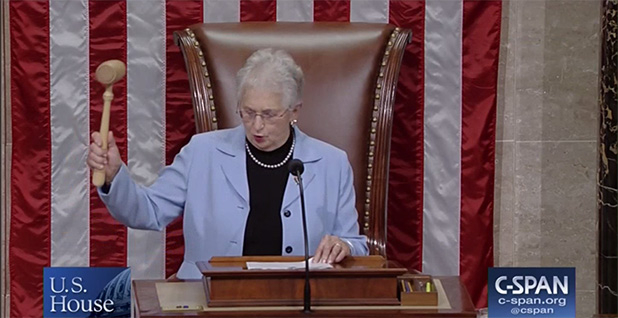 The House today approved a wide-ranging fiscal 2018 spending package that makes cuts in funding to U.S. EPA and the Interior Department, among other agencies, while adding several policy provisions aimed at limiting Obama-era environmental and energy policies.

The omnibus, which contains eight of the 12 annual spending bills, got a 211-198 vote largely along party lines, a signal that coming to a final accord with the Senate on spending won’t be easy.

Congress has about 2 ½ months to work out a final deal, with a stopgap funding measure for agencies running out Dec. 8. The House passed four other appropriations measures before the summer recess.

After plowing through more than 300 amendments over the past two weeks, the House weighed a few final provisions this morning before final passage.

Among them was an amendment from Rep. Bill Huizenga (R-Mich.) that would suspend an Obama-era rule requiring publicly traded companies to disclose sources of minerals. It passed 211-195.

The House over the summer attached a similar provision to a financial regulatory bill, but the rider is seen as having a better chance of being enacted attached to the must-pass spending legislation.

Speaker Paul Ryan (R-Wis.) called the passage of the omnibus a "historic achievement," noting House approval of all spending bills before the new fiscal year. He said it has been a "long time" since the House has met that deadline.

Provisions attached would bar Obama-era rules related to methane emissions and the use of the social cost of carbon metric in environmental reviews.

But Ryan’s optimism is tempered by the reality that the Senate has yet to pass any of its spending bills for fiscal 2018, which forced lawmakers to move the stopgap funding earlier this month.

Now congressional leaders and appropriators face what are likely to be two months of arduous, closed-door negotiations between the chambers over what should be in a final package.

He called on the Senate to "ignore it" and back an accord that would keep government open without harming the environment.