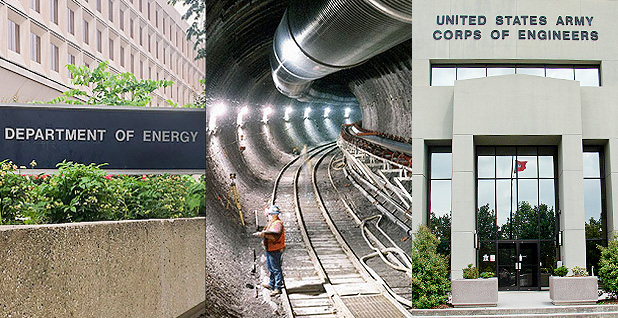 The House will begin considering nearly 50 amendments to its fiscal 2018 energy and water spending bill beginning today, including bids to reverse funding cuts and reshape hot-button policies on Yucca Mountain and the social costs of carbon.

Last night the Rules Committee approved 46 amendments for the energy and water portion of a four-bill spending package that House leaders expect to clear before leaving town at the end of this week for summer recess.

The minibus also includes fiscal 2018 spending for the Defense Department, military construction and veterans affairs, and the legislative branch. Additionally, it contains $1.6 billion in homeland security funding to build a wall along the U.S.-Mexico border, a Trump administration priority that continues to raise tensions.

Among the energy and water policy amendments approved for floor consideration last evening are:

The $37.6 billion energy and water portion of the minibus that would fund the Department of Energy and the Army Corps of Engineers is $203 million less than fiscal 2017 enacted spending levels but $3.2 billion more than requested by the White House.

It would seek a $1 billion cut to DOE’s Office of Energy Efficiency & Renewable Energy as well as a proposal to eliminate the $300 million Advanced Research Projects Agency-Energy, or ARPA-E, which funds "high risk" projects.

House Republicans will also have their first test of the recently revived Holman Rule, a 19th-century procedure that allows for targeting funding for specific federal workers in spending bills.

Rep. Morgan Griffith (R-Va.) has offered a Holman proposal that would eliminate 89 employees from the Congressional Budget Office’s budget analysis division by cutting $15 million from the package’s legislative branch section. He and other Republicans have criticized how the nonpartisan CBO scores the cost of bills.

If the CBO cut succeeds, Republicans could try to target other agencies. U.S. EPA is a main target for many members of the congressional majority, including Griffith.

Amendments the Rules Committee rejected for floor consideration include:

House Republicans continue to plot an endgame to the appropriations process. Speaker Paul Ryan (R-Wis.) said yesterday the four bills in the minibus represented "consensus" within the GOP caucus.

"We do not yet have full consensus on the other eight bills," he told reporters. "That’s what we’re working toward."

However, he acknowledged that moving a minibus now with bills to fund military, veterans, and energy and water projects — all popular with lawmakers — poses a challenge for passing the rest of the politically less-favored spending measures.

"The two biggest engines on the train are defense and veterans and military construction so if you leave the engines off it’s hard to pull the rest of the train," he told reporters. "So hopefully we can marry them back up."

While Republicans have generally had to rely on Democrats to move appropriations bills, Minority Whip Steny Hoyer (D-Md.) said he is urging his members to oppose the minibus, citing the effect it could have on non-defense programs contained in the remaining appropriations bills.

"We’re very, very concerned about that," he told reporters yesterday.

Democrats additionally oppose the $1.6 billion for President Trump’s border wall with Mexico, which Hoyer said will "apparently" be considered adopted when the House votes on the rule for the minibus, a procedural sleight of hand that he termed "irregular order."

However, Cole said the fact that no Democrats have supported the spending bills so far is a selling point for recalcitrant GOP lawmakers. "These are really very conservative bills," he said.

Former Appropriations Chairman Hal Rogers (R-Ky.) said yesterday that he believed the minibus is "in good shape" with his fellow House GOP colleagues.

The House is also expected to punt on the fiscal 2018 budget resolution, which Cole said was stalled in part by GOP misgivings about the measure’s reconciliation instructions, which are intended to bypass the need to garner 60 votes in the Senate for tax reform.

Fears over the proposed Border Adjustment Tax that is central to the House’s tax reform plan are part of that problem, said Cole, himself a member of the Budget Committee. Normally the budget would help set funding levels before appropriators write their bills.

"I think we’re making progress," he said, adding that many of his colleagues "haven’t had a chance to look at a lot of this stuff."