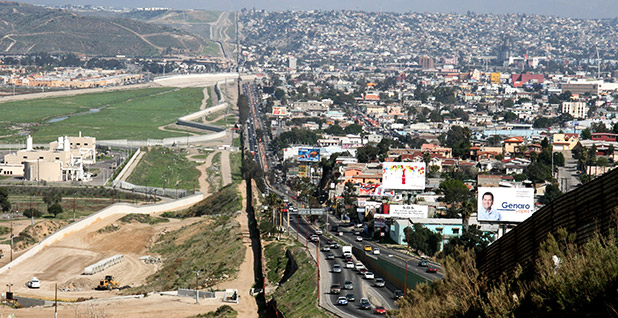 Congressional Democrats will turn a critical eye to the 2005 law that allows the Homeland Security Department to circumvent environmental regulations when constructing border walls or other barriers — potentially ending exemptions to laws like the National Environmental Policy Act and Endangered Species Act.

A spokesman for House Natural Resources Chairman Raúl Grijalva (D-Ariz.) confirmed to E&E News that Democrats plan to examine provisions of the 2005 Real ID Act that exempt construction of new blockades or walls demarcating the border from environmental regulations.

"We will be working with the Homeland Security Committee on a remedy, we just don’t know what shape it will take yet," said spokesman Adam Sarvana.

The two committees are expected to hold hearings on the impact of border wall or barrier construction along the nation’s southern boundary with Mexico and will then formulate legislation.

Democratic Rep. Grace Napolitano of California first raised the possibility yesterday during a Natural Resources Committee forum on the impacts of the existing border walls on communities, the environment and wildlife.

"Waiving NEPA, which is one of the things that we hold dear in the rest of the United States, especially for the public input, is so critical," Napolitano said, arguing that citizens should be allowed to object to eminent domain for land used for border barriers or impacts to wildlife.

She added: "I think we need to go back to review the Real ID and maybe take a look how we can tweak it so it doesn’t give them the total right for a waiver."

The Interior Department manages nearly 800 miles of border territory, or about 40 percent of the 2,000-mile boundary as it crosses California, Arizona, New Mexico and Texas.

In addition, within 100 miles of the line, Interior oversees more than 25 million acres of public lands, including six wildlife refuges, lands held in trust for four American Indian tribes, a half-dozen national parks and Bureau of Land Management districts.

During yesterday’s forum, Grijalva likewise criticized the existing law for failing to take into account the effect existing and new border barriers may have on "those most affected," including local residents, ecology and wildlife.

"This is part of the conversation: the impact this wall is having on communities, on our environment, on our public lands, on our culture, our history," Grijalva said.

The committee is holding forums — but not formal hearings, because membership on the panel has yet to be finalized for the 116th Congress — related to the partial government shutdown, sparked in late December when President Trump demanded $5 billion in new funds for border security (E&E Daily, Jan. 16).

While Republican Rep. Rob Bishop of Utah has long advocated for an expansion of the environmental waivers to the borderlands, the area within 100 miles of the nation’s boundary, no GOP lawmakers participated in yesterday’s event.

Currently, Customs and Border Protection agents working in the borderlands are governed by a 2006 memorandum of understanding among DHS, the Agriculture Department and the Interior Department. The document requires CBP to minimize its impact on natural and cultural resources.

Public lands advocates also urged Democrats to reconsider the waivers allowed under the 2005 law, arguing that portions of the existing 650 miles of walls and fences — much of it built near populated areas or close to urban centers — have prompted significant flood damage and other unintended environmental disasters.

"The waiver authority provided to the Department of Homeland Security through the Real ID Act of 2005 prevents the National Park Service, other federal land managers and the public from participating in decisionmaking processes for construction along the border," National Parks Conservation Association Associate Director for Government Affairs Christina Hazard said in her testimony.

Hazard noted that of the six NPS units on the border, half are home to man-made barriers while the other half have "significant natural barriers," circumventing the need for additional fencing.

"These national parks are connected to the lands and communities that surround them, and the impacts of border activities must be considered comprehensively," she said.

Tohono O’odham Nation Vice Chairman Verlon Jose also urged lawmakers to protect his tribe’s reservation, which is home to a 62-mile stretch of the border in Arizona.

"A wall would further divide tribal lands and communities," Jose said, pointing to the 34,000 tribal members in Arizona and the 2,000 members in northern Mexico. "To build a physical wall along the border would not divide just the land but would divide our people."

Jose also raised concerns that erecting a barrier on the tribe’s land would cut off water supplies and hurt species including jaguars.

"The political calculations and discussions of the wall should be grounded in the real impacts it causes," Garcia testified. "We urge Congress to stop enabling any further harm on communities" along the border.

"This notion of a wall has more to do with a campaign promise … than actual border security improvement," Costa said. "By the way, I thought Mexico was going to pay for this wall. I guess not."

He also mocked the Trump administration’s expected construction of a border wall with large gates — to ensure access to American property located between the barrier and the actual border — expected to begin in Texas next month.

National Butterfly Center Executive Director Marianna Wright noted that the code will be widely distributed to members of the public, which will inevitably lead to misuse.

"It embarrasses me. The ridiculousness of the plan to secure our border when literally thousands of people will have the code to the gate to the border wall," Wright said.

Costa replied, "God forbid should our president learn the gate code, because he’ll blab it to everybody."