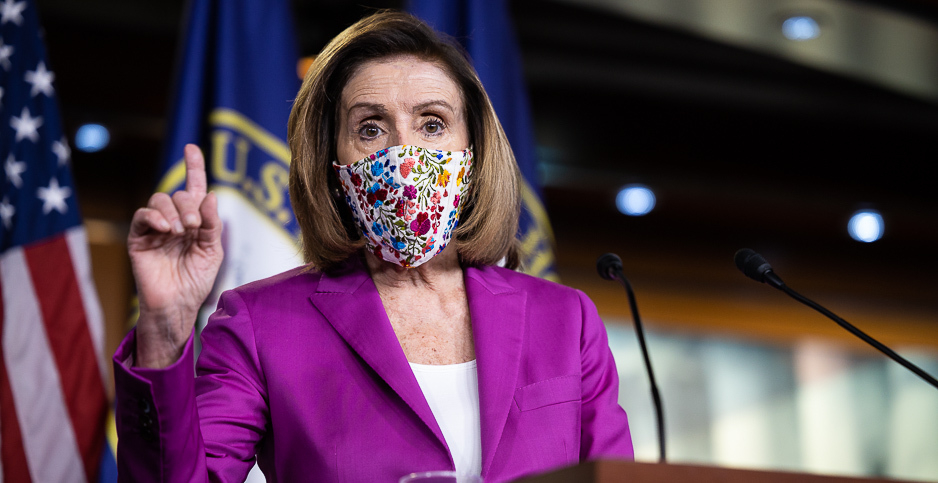 The House will return to Washington as Democrats launch a new push to permanently remove President Trump from office and GOP calls begin to grow for Trump to step aside in the final 10 days of his presidency.

Democrats today will attempt to pass by unanimous consent a resolution calling on Vice President Mike Pence to convene the Cabinet and invoke the 25th Amendment to the Constitution, which allows for the removal of a president who cannot carry out his duties.

Republicans are expected to object, prompting the chamber’s return tomorrow to vote on the measure. "We are calling on the vice president to respond within 24 hours," Pelosi wrote.

Pence has resisted the public calls to invoke the 25th Amendment following last week’s riots, in which a crowd of thousands egged on by Trump overran U.S. Capitol Police.

Four rioters died during the insurrection, including a woman shot by security forces as she tried to enter an area near the House chamber. A Capitol Police officer, 42, also died after a rioter hit him with a fire extinguisher.

If Pence fails to act, the House will next impeach Trump again, although Pelosi did not specify when the articles would receive a vote.

"In protecting our Constitution and our Democracy, we will act with urgency, because this president represents an imminent threat to both," she wrote. "As the days go by, the horror of the ongoing assault on our democracy perpetrated by this president is intensified and so is the immediate need for action."

The threat of a second impeachment and a subsequent mandatory Senate trial comes with just over a week left in Trump’s presidency. It’s almost certain that Trump will leave office before a Senate trial begins, according to a memo from Senate Majority Leader Mitch McConnell (R-Ky.) obtained by The Washington Post on Friday.

"Let’s give President-elect Biden the 100 days he needs to get his agenda off and running, and maybe we will send the articles some time after that," Clyburn said on CNN’s "State of the Union."

Supporters of impeaching the president, even after he leaves, say Trump’s actions cannot go unpunished. They also want him to be barred from ever holding high office in the future.

Biden has steered clear of the impeachment debate, but West Virginia Democratic Sen. Joe Manchin said yesterday he was concerned that a Senate trial could sideline Biden’s expected push for more COVID-19 relief and a massive infrastructure recovery package.

"We’re about ready to install a new government," Manchin said on "State of the Union. "If I was Joe Biden, I’d want to be able to put my government together to start putting confidence back in the American people that we can govern our self and be the beacon of light for the whole country and the whole world."

Manchin — as one of the Senate’s most conservative Democrats, who is poised to exert more clout in the 50-50 chamber — said he would support impeaching the president. "There’s no doubt about it, he should be impeached, basically," Manchin said.

The impeachment articles would focus on the president’s efforts to undermine last year’s election, his pressure on Georgia officials to oveturn Biden’s win, and his encouragment Wednesday of supporters to focus on the Capitol.

Murkowski: ‘I want him out’

Two Republican senators in recent days have called for Trump to resign, including Pat Toomey of Pennsylvania, who will not run for reelection in 2022.

"I think the best way for our country … is for the president to resign and go away as soon as possible," Toomey said on NBC’s "Meet the Press" yesterday.

"I acknowledge that may not be likely," he added. "But I think that would be best. Does not look as though there is the will or the consensus to exercise the 25th Amendment option. And I don’t think there’s time to do an impeachment. There’s 10 days left before the president leaves anyway. I think the best thing would be a resignation."

Sen. Lisa Murkowski (R-Alaska) also called on Trump to quit. "I want him to resign," she told the Anchorage Daily News on Friday. "I want him out. He has caused enough damage."

A Senate trial may pose a difficult political dilemma for Republican senators up for reelection in 2022, including Murkowski.

However, the fact that Trump would be barred from holding federal office if convicted may provide some Republicans with an incentive to rid the party of the president’s stain and provide themselves political distance.

A handful of House Republicans who criticized their GOP colleagues for objecting to Biden’s win are calling on the president-elect to come out against the impeachment push, which they say "should not occur in the heat of the moment, but rather after great deliberation."

"This impeachment would undermine your priority of unifying Americans, and would be a further distraction to our nation at a time when millions of our fellow citizens are hurting because of the pandemic and the economic fallout," Reps. Ken Buck of Colorado, Chip Roy of Texas and Nancy Mace of South Carolina and others wrote.

But freshman Michigan Republican Rep. Peter Meijer said, "We can’t paper over the assault on the Capitol with empty calls for ‘unity.’ Unless my party faces the truth of what happened and holds those responsible to account, we will never regain the public’s trust and earn the honor of leading the nation forward."

Roy Blunt of Missouri, a member of the Senate Republican leadership, declined to say Trump should resign yesterday.

"That would be up to him," he said on CBS’s "Face the Nation." "But my view would be what the president should do is now finish the last 10 days of his presidency."

However, Blunt recognized Trump’s role in last week’s deadly riots. "I think the president’s decisions and his actions that day and leading up to that day on this topic were clearly reckless," he said.

Pressed on whether GOP leaders would hold Trump accountable for his actions in the waning days of his presidency, Blunt said, "I think the country is the right way to hold presidents accountable."

But he added, "The president should be very careful over the next 10 days that his behavior is what you’d expect from the leader of the greatest country in the world."