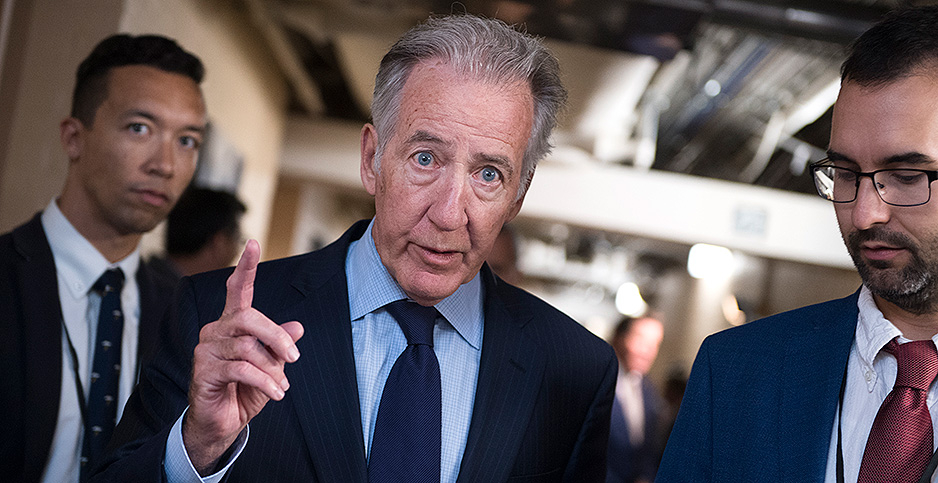 House Ways and Means Democrats released a broad draft energy tax package that would extend and revise a host of renewable, clean energy and efficiency incentives.

The "Growing Renewable Energy and Efficiency Now (GREEN) Act," offered by Rep. Mike Thompson (D-Calif.), chairman of the Subcommittee on Select Revenue Measures, along with other committee Democrats, responds to months of pent-up desire from outside groups and their congressional allies to legislate on energy taxes.

In a statement, Thompson called the bill "a comprehensive approach to addressing the threat of climate change through our tax code."

"This bill will build on existing tax incentives that promote renewable energy and increase efficiency and create new models for technology and activity to reduce our carbon footprint," he said. "I’ve long said that if we don’t address climate change, nothing else matters as we won’t have a planet to pass on to our next generation."

The proposal would revive and make changes to an assortment of energy breaks that either are expired or soon will be, while also making changes sought by industry and advocacy groups.

As committee Democrats signaled last week, the bill would revisit the terms of the 2015 law that extended and phased down the renewables production tax credit (PTC) and investment tax credit (ITC) in most cases through 2024, according to a summary.

The same break would be extended for an assortment of energy sources that were inadvertently left out of the 2015 tax deal, including fiber-optic solar equipment, fuel cells, microturbines, combined heat and power, and small wind, at the same schedule but ending in 2026.

Notably, the bill would expand the ITC to allow energy storage to qualify — as sought by many outside groups and Democrats.

Also added to the ITC would be waste energy recovery projects, certain biogas and linear generators, all of which would qualify for the 30% ITC through the end of 2024. The incentive would drop to 26% in 2025 and 22% in 2026.

The measure would extend for one year a credit for carbon capture and sequestration facilities that begin construction before the end of 2024.

It also would extend master limited partnership tax treatment from fossil fuels to renewables — a long-sought goal of House and Senate lawmakers from both parties that has struggled to gain traction (E&E Daily, Oct. 26, 2017).

Thompson’s bill would extend a number of lapsed incentives for biofuels, including the biodiesel blenders’ credit, which would be extended at $1 a gallon through 2021 before phasing down to 75 cents in 2022, 50 cents in 2023 and 33 cents in 2024. It would then expire.

Extending that credit is a top priority of Senate Finance Chairman Chuck Grassley (R-Iowa), and its inclusion could help put some of the provisions of Thompson’s bill in play in year-end negotiations on tax extenders.

As Ways and Means Democrats signaled last week, the bill would extend and revise the cap for the electric vehicle tax credit by raising the current 200,000-vehicle-per-manufacturer sales cap to 600,000. The bill would reduce the credit’s value from the current amount of $7,500 to $7,000 (E&E News PM, Nov. 13).

The legislation would create a new credit for purchases of used plug-in EVs through 2024, with buyers able to claim a base credit of $1,250 for qualifying used vehicles. The credit would be capped at the lesser of $2,500 credit or 30% of the sale price, according to the summary.

The package would create a new manufacturer credit for the sale of "heavy zero emission vehicles" through 2024, with vehicle makers able to claim a credit of 10% of the sale price of an eligible vehicle. The value would be capped at $100,000.

To be eligible for this break, according to the summary, vehicles must be for domestic use, weigh no less than 14,000 pounds, not include an internal combustion engine and be "propelled solely by an electric motor which draws electricity from a battery or fuel cell."

It also tasks the Treasury Department with studying and producing a report on EPA’s greenhouse gas reporting program to determine the amount of greenhouse gases emitted by each taxpayer for the purpose of imposing a fee for those emissions.

The release of the draft fulfills a pledge made by Ways and Means Chairman Richard Neal (D-Mass.) earlier this year. Following a member briefing on the plan last week, panel Democrats said they anticipated a hearing would follow.

In a statement today, Neal said only that he looks forward to hearing from experts and analysts on the bill.

Last week, Neal indicated that some of the bill’s provisions could be on the table in year-end tax extender negotiations with the Senate.