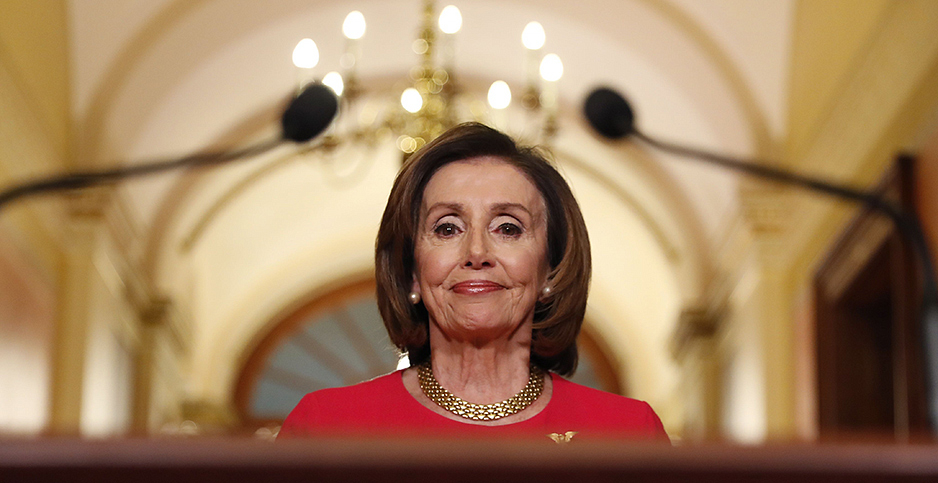 Against a backdrop of a worsening public health crisis, cranky senators continued negotiations over a third phase of COVID-19 stimulus, as House Democrats injected climate change into the pandemic debate with their own relief package.

"We have had some very good discussions, and in fact the list of outstanding issues has narrowed significantly," Schumer said before the Senate adjourned last night.

The back-channel talks between Schumer and Mnuchin came on a day of extraordinarily bitter squabbling on the Senate floor between the two parties, including another failed procedural vote and a detour into the Green New Deal (Greenwire, March 23).

Democrats have continued to press for more relief for hospitals and measures to boost public health infrastructure.

There are also serious negotiations surrounding the Senate GOP’s proposal to send more than a half-trillion dollars’ worth of loans and assistance to airlines and other suffering sectors, with Democrats in both chambers pressing for assistance to be linked to carbon emissions cuts.

Republicans have also pressed to appropriate billions to fill the Strategic Petroleum Reserve, prompting industry and Democratic calls for clean energy taxes to be added to the stimulus mix.

However, clean energy incentives did not make the cut in the House Democrats’ broad COVID-19 stimulus released last night, which is widely viewed as a legislative marker for a later round of stimulus.

The House Democrats’ bill does touch on energy and environmental issues, however, seeking to boost spending for the Interior and Energy departments, as well as EPA (see related story).

Senate Republicans have said they want to discuss new money for agencies but in a different piece of legislation.

The centerpiece of the House proposal would require the aviation sector to reduce its carbon footprint by 50% by 2050, according to a summary released last night.

According to the plan, carriers receiving aid would be required to fully offset their carbon emissions for all domestic flights by 2025, and it would establish a process for monitoring those efforts.

Carriers would also have to meet several benchmarks for cutting emissions generated from domestic flights by 50% over current levels by 2050.

The bill would require EPA to finalize new regulations to limit greenhouse gas emissions from new and existing planes within 18 months of enactment.

During the public comment period, the bill instructs EPA to request feedback on minimum greenhouse gas standards established by the International Civil Aviation Organization, as well as more stringent standards.

It additionally would provide grants through the Federal Aviation Administration to develop sustainable aviation fuels, with research funds included, as well.

The House Democratic plan would create a "Cash for Clunkers" program that would allow the Transportation Department to purchase older planes if airlines commit to purchasing newer, more efficient planes. That proposal is modeled after a similar 2009 program for older automobiles, which was later extended by Congress.

The bill would also expand a voluntary FAA program that supports the purchase of low-emission vehicles and equipment in airports.

The proposal was ridiculed by Republicans on both sides of the Capitol yesterday. Sen. Tom Cotton (R-Ark.) said it would be a "pretty amazing feat of engineering to get jet engines that you can plug into the wall and then fly across the continent." Democrats, Cotton added, "have a lot of faith in American ingenuity."

Senate Environment and Public Works Chairman John Barrasso (R-Wyo.) denounced the inclusion of "portions of the Green New Deal" in the House proposal, calling it out of touch with health care professionals working day and night through the pandemic (see related story).

"They need help," Barrasso said in an angry speech. "They’re looking to us for help."

Absent from the House plan are specific tax proposals to help the clean energy sector, which industry and sympathetic Democrats have been pushing in recent days — and which Senate Republicans yesterday portrayed as a holdup in the broader stimulus.

The Solar Energy Industries Association yesterday had specifically requested tax help to weather the economic downturn, urging extensions of the investment tax credit and the ability to convert the break into a direct payment. Those efforts will continue in a later round of stimulus talks.

Nor does the House Democratic plan address calls to include a broad infrastructure plan or the highway bill.

‘We should not be physically present’

Lawmakers are also ramping up their calls for remote voting, as new cases of COVID-19 crop up on Capitol Hill.

"I totally support the idea of remote voting so the Senate can continue to operate during this crisis," tweeted Sen. Lindsey Graham (R-S.C.) yesterday. "We should make this change before the Senate leaves town."

With the third stimulus package in limbo, it’s not likely the upper chamber will leave Washington anytime soon.

So far, three lawmakers have tested positive for the virus — Paul and Reps. Mario Diaz-Balart (R-Fla.) and Ben McAdams (D-Utah), who was hospitalized earlier yesterday. Several more have self-isolated because they were in contact with those who tested positive.

Dozens of Democrats, led by California Reps. Katie Porter and Eric Swalwell, have sent letters in the past week to leadership, as well as House Rules Chairman Jim McGovern (D-Mass.), pushing for a temporary rule change to allow members to vote remotely.

"We need to provide a mechanism through which Congress can act during times of crisis without having to assemble in one place," the members wrote in a letter yesterday to McGovern.

Senators could vote away from the Capitol using approved technology for 30 days from the time leadership declares a national crisis that makes in-person votes "infeasible."

"We should not be physically present on this floor at this moment," Durbin said yesterday. "We know better. And our staff is subjected to whatever we bring on the floor in terms of viral load. Let’s think about this in human terms," the Democrat said, again advocating for a rule change to allow voting off-site during national crises.