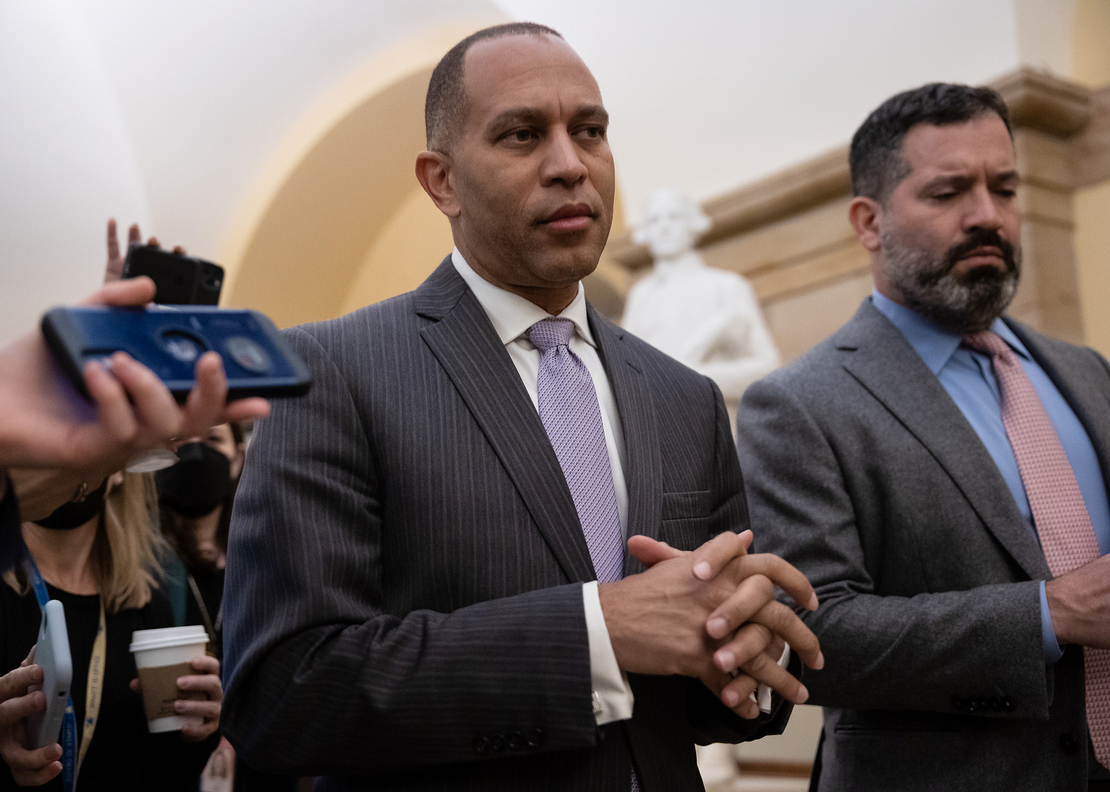 House Democrats will meet this week to elect their leaders for the next Congress.

It will be the first time in more than a decade that Speaker Nancy Pelosi of California, Majority Leader Steny Hoyer of Maryland and Majority Whip Jim Clyburn of South Carolina aren’t in contention for the top three leadership slots.

With Democrats poised to return to the minority in 2023, Pelosi and Hoyer nearly two weeks ago announced they would not run to serve in elected leadership. Clyburn, meanwhile, has agreed to seek out the lower-tier “assistant leader” position as a way to remain at the leadership table without pushing out younger lawmakers looking to rise in the ranks.

Their retreat from the highest rungs of the leadership ladder has cleared the way for Reps. Hakeem Jeffries of New York, Katherine Clark of Massachusetts and Pete Aguilar of California to secure the top three positions.

The election is scheduled for Nov. 30, with some hours Dec. 1 set aside in case more time is needed for members to vote.

Jeffries, currently the House Democratic Caucus chair, is running for minority leader. He’d be the first Black lawmaker to lead a party in Congress.

Clark, now serving as assistant speaker, is in contention to serve as minority whip.

Aguilar, the House Democratic Caucus vice-chair, is looking to ascend to caucus chair.

All three are likely to run unopposed — a sign the lawmakers have been working behind the scenes to line up support among their peers. There’s also a desire among members to avoid an ugly intraparty power struggle.

An eagerness to accommodate ambitious colleagues without the accompanying drama led Jeffries, Clark and Aguilar to propose reestablishing a senior seat on the Democratic Policy and Communications Committee — a chair position to oversee three co-chairs of the caucus’ messaging apparatus.

Rep. Joe Neguse (D-Colo.), now a DPCC co-chair, plans to run for this “chair of the DPCC co-chairs” position after dropping his bid for chair of the House Democratic Caucus in deference to Aguilar.

In doing so, Neguse will also avoid adding more chaos to the race for caucus vice-chair, which is shaping up to be the most crowded category in leadership elections this week.

Four Democrats are competing for that slot: Reps. Debbie Dingell of Michigan and Ted Lieu of California, who are currently Neguse’s DPCC co-chairs; Joyce Beatty of Ohio, who is termed out as chair of the Congressional Black Caucus; and Madeleine Dean of Pennsylvania.

While Democrats will decide on their leadership structure this week, Republicans settled their slate before the Thanksgiving holiday — even before the House had officially been called to favor the GOP majority.

There remains, however, serious concerns about whether the party’s pick for speaker, current Minority Leader Kevin McCarthy of California, has the backing to formally assume this position.

While all leadership positions, majority and minority, are decided by secret ballot within the parties, the internal party vote for speaker is actually a nomination. All members of the House must participate in a roll call vote on the opening day of each new Congress, which in 2023 will be Jan. 3.

McCarthy, who needs 218 votes, won his secret ballot nominating contest against conservative Rep. Andy Biggs (R-Ariz.) 188-31. So far, at least five Republicans have signaled they plan to vote against McCarthy on the floor, according to POLITICO.

If McCarthy’s 222-member majority holds, he can only afford to lose four Republicans and still win the job.

Over the coming weeks, McCarthy will be working hard to shore up his support, meeting with hardliners and making comprises and concessions about the trajectory of the party’s agenda to win over skeptics.

Assuming McCarthy is able to pull off a victory and doesn’t scramble the ambitions of the rest of the House GOP leadership slate, his top lieutenants will be current House Minority Whip Steve Scalise of Louisiana in the role of majority leader and outgoing National Republican Congressional Committee Chair Tom Emmer of Minnesota as minority whip.

Reps. Elise Stefanik of New York and Mike Johnson of Louisiana will continue to serve as Republican Conference chair and vice-chair, respectively, while Richard Hudson of North Carolina will succeed Emmer at the helm of the NRCC.