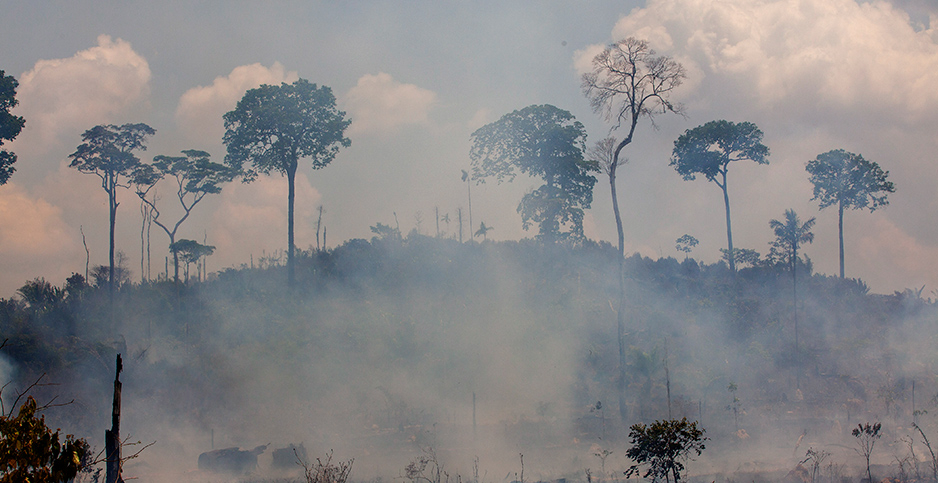 The international community has expressed concern about fires this summer in the Amazon rainforest. Fotoarena/Newscom

As Congress returns this week, lawmakers will grapple with the still-growing global unrest over Brazil’s response to the wildfires that have torn through the Amazon rainforest in the last month.

Tomorrow the House Foreign Affairs Subcommittee on the Western Hemisphere, Civilian Security and Trade will meet to discuss the "moral imperative" world governments share to prevent deforestation in Brazil.

Brazil, which contains 60% of the Amazon rainforest, saw the most fires in August since 2010, with most believed to be started illegally by farmers and ranchers operating illicit operations.

Among the items up for discussion will be how the United States can partner with the Brazilian government to preserve the region’s landscape.

Brazil’s right-wing president, Jair Bolsonaro, has been heavily criticized for his reluctance over the past month to accept international aid to stop the wildfires, which he has publicly referred to as an "internal matter" for Brazil and its neighbors (Greenwire, Aug. 23).

Last week, Bolsonaro told reporters that he plans to speak about the fires at the U.N. General Assembly this month, stating that he "will not accept alms from any country in the world under the pretext of preserving the Amazon when it is being divided into lots and sold" (Climatewire, Sept. 4).

Many environmental and world leaders have agreed that the longevity of the Amazon will depend on sustainable development, a difficult yet critical alternative for an area relatively rich in profitable natural resources.

Lawmakers at the hearing will learn about some of the specific challenges and barriers to sustainability in Brazil from Monica de Bolle, a Brazilian economist and senior fellow at the Peterson Institute for International Economics.

In an email, de Bolle said she plans to address "the current government’s policies towards the Amazon and the environment, proposals for the sustainable economic development of the Amazon … and how the US and Brazil can collaborate to prevent deforestation, conserve the rainforest, and create a development agenda for the region."

Yet, even if Brazil and the United States were to search for common ground on deforestation, the international trade of Brazilian beef looms large.

After President Trump expressed his intention to proceed in signing a trade deal with the country, 11 Democratic senators released a letter Friday afternoon begging Trade Representative Robert Lighthizer to demand that no deal proceed until Bolsonaro takes more action against illegal cattle farming and enforces protections for indigenous communities and biodiversity.

"The reckless expansion of Brazil’s beef industry has contributed to more deforestation than any other activity," the letter reads. "There is clear evidence that cattle ranchers, farmers, and others involved in the for-profit development of the rainforest are largely responsible for this destruction."