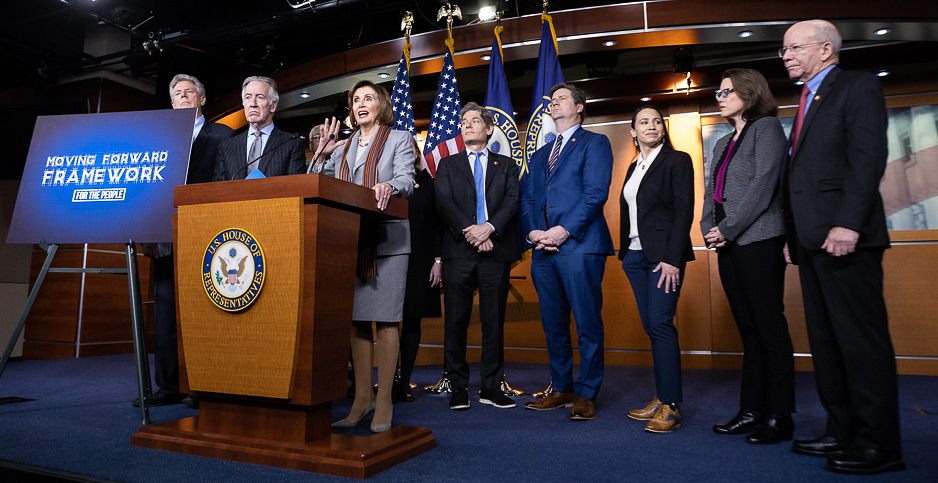 Speaker Nancy Pelosi (D-Calif.) and other House Democrats during the release of principles for infrastructure legislation in January. Francis Chung/E&E News

The long-awaited package, which would include reauthorization of expiring surface transportation provisions, is expected to resemble a framework unveiled in January (Greenwire, Jan. 29).

"Text of the surface bill will be released in the coming days," a House Democratic aide said in an email to E&E News yesterday. "Like the framework House Democrats released earlier this year, it’s expected a number of items will address climate change and safety, which are focal points."

Transportation and Infrastructure Chairman Peter DeFazio (D-Ore.) has been working to draft the surface transportation provisions of the package for months, although his efforts have been delayed by the coronavirus pandemic.

Under House rules, DeFazio could formally introduce the measure as soon as Thursday, when the chamber meets for a pro forma session. The text could be released even earlier.

A central component of the package is the five-year reauthorization of the Fixing America’s Surface Transportation (FAST) Act, which expires on Sept. 30.

The rest of the package will be modeled after the $760 billion framework that House Democrats rolled out earlier this year.

The plan, dubbed "Moving Forward," would specifically provide $434 billion for highway and transit programs, $55 billion for rail, $34.3 billion for clean energy, and $25.4 billion for drinking water.

The clean energy provisions could finally offer some relief to the renewables sector, which has been patiently awaiting congressional action after shedding hundreds of thousands of jobs during the COVID-19 pandemic.

House Majority Leader Steny Hoyer (D-Md.) signaled Friday that his caucus hopes to bring the package to the floor in late June or July, along with the fiscal 2021 spending bills and the National Defense Authorization Act (E&E News PM, May 29).

The package is not expected to include the reauthorization of the Water Resources Development Act, which was expected to be released in May (E&E Daily, May 28).

The WRDA reauthorization is now likely to be released in July, a House Democratic aide told E&E News yesterday.

The Senate has moved at a much faster pace than the House when it comes to infrastructure legislation — a point that Senate Environment and Public Works Chairman John Barrasso (R-Wyo.) emphasized yesterday.

Barrasso has long been keen on folding the highway measure and both water bills into a broad Senate infrastructure package.

Barrasso bashed his counterparts in the House yesterday for dragging their feet on those three bills, which he said would help the economy recover from the coronavirus pandemic.

"Republicans and Democrats in the Senate are unifying around three infrastructure bills to fix America’s highways, ports and water systems," Barrasso wrote in an opinion piece for Fox News.

"Meanwhile, Democrats in the House of Representatives are at a partisan standstill," he added. "House Speaker Nancy Pelosi, D-Calif., and House Transportation Committee Chairman Peter DeFazio, D-Ore., have put out nothing other than a partisan outline calling for massive government spending over the next five years."

Barrasso went on to criticize the environmental provisions in the House Democrats’ framework.

Barrasso neglected to mention the fact that the Senate’s highway bill contains the first-ever climate title, which is aimed at reducing carbon emissions from transportation and boosting the resilience of projects to natural disasters.

‘Interest in seizing the day’

Sen. Tom Carper of Delaware, the top Democrat on the EPW Committee, told E&E News he had spoken with relevant committee leaders of both parties about completing their titles of the chamber’s highway bill.

The Banking, Housing and Urban Affairs Committee has jurisdiction over the transit provisions in the highway bill, as most mass transit systems are located in urban areas. The Commerce, Science and Transportation Committee is responsible for the safety provisions.

There appears to be less agreement on raising more than $100 billion to pay for the expected shortfall from the Highway Trust Fund — a task that falls to the Finance Committee.

Finding pay-fors remains the "toughest piece" of getting the bill to the floor, said Carper, a member of the tax-writing panel.

Based on conversations with about 20 senators from both parties in recent weeks, however, Carper said "almost everyone" is interested in surface transportation, water infrastructure and deployment of broadband in rural areas — an issue that has gained prominence during the pandemic.

"I think there’s a way, there’s actually a need, to do all of those," Carper said. "And I’ve talked to enough senators now, Democrat and Republican, to believe that there’s some goodwill and some strong bipartisan interest in seizing the day."

Infrastructure is unlikely to be part of the next phase of COVID-19 stimulus, which is still focused on addressing the immediate economic and public health needs of Americans and businesses, Carper said.

Instead, the Delaware Democrat suggested that the issue could be part of a recovery package "further down the road," when the economy has begun to rebound and the unemployment rate has started to "level off."

While the four COVID-19 relief bills enacted so far have been designated as emergency spending and therefore exempt from budgeting rules, Carper said he expects that an infrastructure package would be paid for to prevent adding to the growing national deficit.

"I’ve had a number of colleagues say to me that they were willing to vote for enormous amounts of money to stem the decline in our economy and meet some immediate needs with respect to the pandemic," he said. "But when it comes to paying for roads, highways, bridges, there’s a longtime belief: Things that are worth having are worth paying for."

Indexing the federal gas and diesel tax for the first time in 25 years and creating new user fees for electric vehicles are two pay-fors that have won bipartisan support on Capitol Hill, but neither provides sufficient revenues to cover the funding shortfall (E&E Daily, Feb. 14).

But Carper said a 50-state vehicle miles traveled pilot program that would be established under the Senate’s highway bill will inform the transition to new transportation funding mechanisms.

"In my view, it shouldn’t matter whether people driving cars, trucks and vans are powered by gasoline, by diesel, by battery, by hydrogen, by natural gas," he said. "If they’re using the roads, they ought to be paying their fair share."