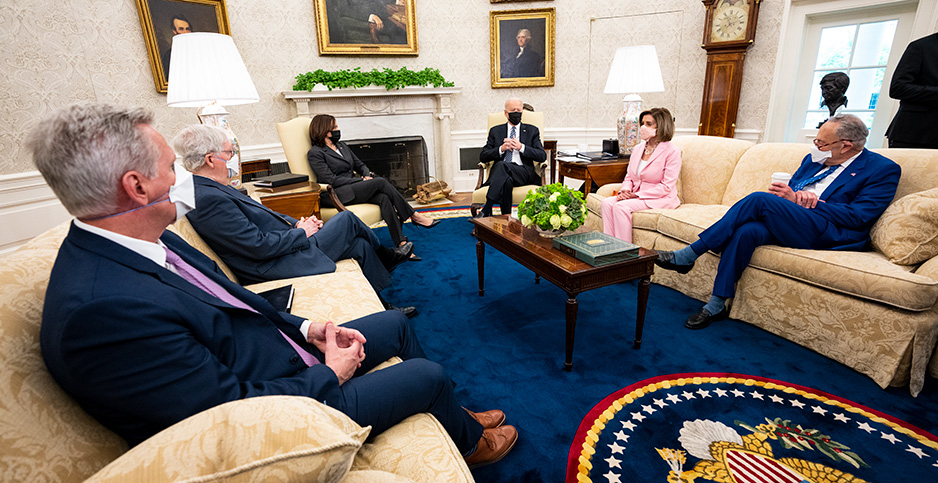 House Democrats plan to put an infrastructure bill on the floor before Independence Day, top lawmakers said yesterday, a quick pace despite talk of bipartisanship from the White House.

House Transportation and Infrastructure Chair Peter DeFazio (D-Ore.) and Speaker Nancy Pelosi (D-Calif.) said they would move a "major infrastructure initiative" to the floor before the July 4 recess, despite lingering questions about how to pay for it and whether to involve Republicans.

"One area of, shall we say, not total agreement was electric cars," Pelosi told reporters. "We didn’t go through a list and say, ‘Yes on this, no on that,’ but that emerged as something that they might not be too fond of."

McConnell said congressional leaders and Biden had pledged to work toward an agreement on the scope of the package.

"I think the first step is obviously to define what infrastructure is, the definition of it," McConnell told reporters at the White House after the meeting. "And we all agreed to work on that together."

McCarthy said afterward that he raised the question of reforming the National Environmental Policy Act to streamline the permitting of infrastructure projects.

"I think [what] America wants to know is that you’re not going to wait a decade to build it," McCarthy told reporters. "We want to be competitive, we have to have things built."

Pelosi said she emerged from the meeting with higher hopes for bipartisanship, starting with the surface transportation bill. But Democrats nonetheless appeared willing to forge ahead with or without Republicans.

In an interview with MSNBC released yesterday after the White House meeting, Biden said he wants a deal with Republicans on physical infrastructure if possible, but he suggested he’ll push his "social infrastructure" plans through with just Democratic votes if necessary.

DeFazio said any infrastructure measure will include provisions to electrify the federal highway system and promote grid resilience and renewables, whether or not Republicans are interested.

"We’ve got to deal with climate change," DeFazio said. "They can’t deny it anymore."

DeFazio did not commit to a specific timeline for a markup in his committee, but he said the panel would take up both the surface transportation bill and a wastewater infrastructure measure "very soon."

T&I will also have to deal with some 2,000 earmark requests. "We are individually reviewing every one, and my staff is working on making all the submissions compliant with the rules," DeFazio told reporters.

Senate Environment and Public Works Chairman Tom Carper (D-Del.) said yesterday that he is focused on getting a surface transportation bill ready to move through the panel with bipartisan support by Memorial Day and that decisions on earmarks will be made later.

"At some point, in the next several weeks, I’m sure we’ll turn to earmarks," he told E&E News yesterday. "That’s not what we’re focused on right now."

How to pay for an infrastructure bill and how it might fit in the confines of budget reconciliation remain major questions, and Democrats offered differing ideas yesterday.

Democratic House leadership emphatically shot down the idea of raising user fees, either the federal gasoline tax or a new vehicle-miles-traveled (VMT) fee, despite interest from both parties.

"A user fee is a tax on working-class Americans, and we don’t support that," Democratic Caucus Chairman Hakeem Jeffries (D-N.Y.) told reporters yesterday.

Pelosi also said she opposes raising user fees, telling reporters that "working families in our country should not have to subsidize the infrastructure of America."

Biden’s infrastructure plan similarly rejects the conventional pay-for model for infrastructure and instead proposes to roll back the corporate tax cuts passed in 2017, an idea Republicans called a "red line" yesterday.

The Bipartisan Policy Center yesterday floated its own compromise proposal, which would spend $1 trillion over five years and be paid for through a mix of user fees and corporate tax increases.

User fees remain a popular model in the Senate, where Carper has for years lobbied for a VMT to ensure electric vehicles pay into the federal highway system (E&E Daily, May 12).

"We’re a long way until we get to a final compromise on surface transportation," Carper told E&E News yesterday when asked about opposition to raising user fees.

"The administration, to their credit, they’ve actually proposed a pay-for, but they don’t reflect so much the issue of responsibility of those who use roads, highways and bridges," he said.

Carper, who is working on a highway bill that is seen as a vehicle for the larger infrastructure package, noted that user fees funneled to the Highway Trust Fund currently pay for mass transit as well.

"To the extent to which we’re not paying any more money from those fees to the Highway Trust Fund, we’re starving transit systems as well," Carper said.

Sen. John Barrasso (R-Wyo.), the ranking member on the Energy and Natural Resources Committee who is among the Republicans who will meet with Biden today, said yesterday that GOP objections to the EV provisions in Biden’s $2.2 trillion American Jobs Plan stem from the sheer size.

"They have put more money in their proposal for electric vehicles than they have for roads, bridges, ports, airports and waterways combined, and we have a lot of needs for what I consider a core infrastructure and the president refers to as hard infrastructure," Barrasso told E&E News.

He said Republicans will continue to push to ensure that EVs and other alternative vehicles "are paying their fair share for the use of the road."

However, in response to a question for the record by Carper from an April EPW hearing, the Congressional Budget Office (CBO) concluded that an EV fee of $100 annually would raise about $1.1 billion over five years.

"That amount would equal 1.6 percent of the Highway Trust Fund’s cumulative shortfall over that five-year period, according to CBO’s baseline budget projections as of February 2021," CBO wrote in a response released yesterday.

The pay-for debate could help determine how things shake out with reconciliation, the process that allows certain bills to pass by a simple majority, which Democrats on both sides of Capitol Hill say they’re trying to avoid.

DeFazio said he’s focused for now on getting the surface transportation and wastewater authorization bills out of committee in the coming weeks.

"It’s best to avoid reconciliation and having to have a seance with a dead senator," DeFazio said, referencing the so-called Byrd rule, which limits the substance of policies that can be moved through reconciliation.

But Democratic leaders and the White House are also facing pressure from the left to forgo negotiations with the GOP.

"Let’s not pretend that Republicans are interested in any sort of compromise," wrote Congressional Progressive Caucus Chairwoman Pramila Jayapal (D-Wash.) on Twitter yesterday. "Let’s go big, go bold, and make the ultra-rich and corporations finally pay their fair share so we can invest in working families."

"We are up currently against the ticking time bomb of an unrelenting climate crisis and an economic crisis wearing down working people," said Sunrise Movement press secretary Ellen Sciales in a statement. "Each day the process of passing an infrastructure package is delayed by performative negotiations with the GOP — who are clearly disinterested in working with Democrats — another day goes by that we are not healing our planet or getting people good jobs to support their families."

Despite such concerns, Biden’s outreach to the GOP will continue today, when he hosts Sen. Shelley Moore Capito (R-W.Va.), the ranking member on EPW, at the White House, along with other Republicans.

The Senate GOP last month proposed $568 billion for infrastructure; McCarthy told reporters yesterday that House Republicans are working on their own proposal, which he signaled would total less than the $800 billion ceiling McConnell has proposed.

Capito told reporters yesterday that Republicans will emphasize they "want to focus on physical infrastructure, and we’d like us to go through regular order" — a point McConnell and McCarthy made yesterday to Biden as well.

McConnell said committees have the proper expertise to craft an infrastructure package and would provide a chance for all members to have input.

"I don’t favor having a top-down dictation as to what this package looks like, but rather a consultative process in which everybody in my conference is involved in it," he said.