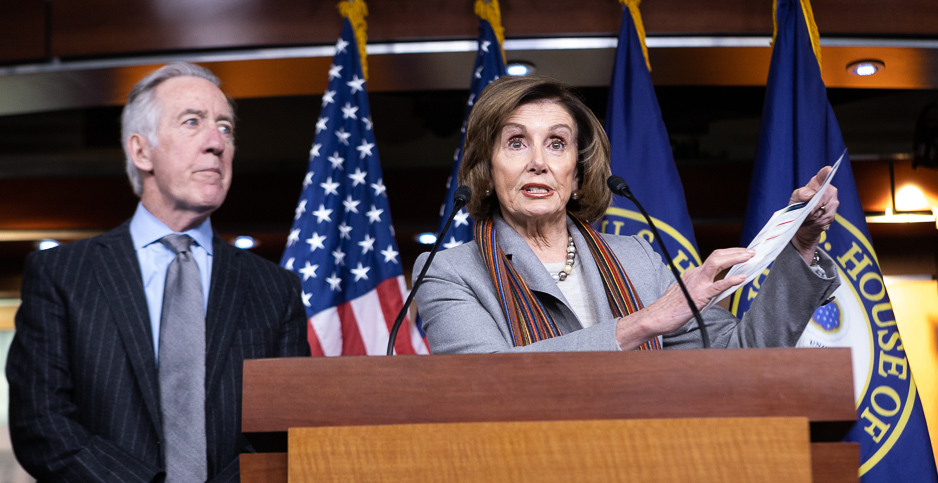 Pelosi stressed that the framework is a starting point and her caucus plans to release additional infrastructure plans in the coming months with an eye toward housing, education and natural resources.

"I do want to say that this is just one part of what we will be doing when we have our legislative [plans] for infrastructure," she said. "We’ll also have a special focus on housing, a special focus on education … all of it very important."

Those plans will eventually form the spine of a broader infrastructure package, although Pelosi and others declined to provide a timeline for moving the legislation to the House floor. To be sure, the House infrastructure package has little chance of getting through the Republican-controlled Senate and reaching President Trump’s desk before the election.

The framework includes a total investment of $760 billion over five years. That’s more than double the $287 billion highway bill that passed the Senate Environment and Public Works Committee over the summer.

A significant chunk of the total funding — $329 billion — would go toward modernizing the country’s network of highways, according to a summary provided by House Democratic aides.

Another $105 billion would go toward improving public transit, including through "investment in zero-emission buses to reduce carbon pollution," according to the summary.

Roughly $34.3 billion would be funneled toward clean energy, including efforts to modernize the electric grid and build more electric vehicle charging stations.

And $34.4 billion would be allocated to drinking water, including through funding to local communities to deal with contamination from per- and polyfluoroalkyl substances (PFAS).

Several committees played a role in crafting the framework.

The Transportation and Infrastructure Committee took the lead on drafting the surface transportation provisions, while the Energy and Commerce Committee handled the clean energy and broadband portions.

The Ways and Means Committee has arguably the hardest job: figuring out how to pay for the framework once it turns into actual legislation.

The panel will get started with a hearing this afternoon titled "Paving the Way for Funding and Financing Infrastructure Investments."

The framework fits into House Democrats’ broader strategy and messaging on climate change in the 116th Congress.

It comes after E&C leaders yesterday released the text of their long-awaited climate bill, which includes a goal of decarbonizing the entire U.S. economy by 2050 (E&E News PM, Jan. 28).

Chairman Frank Pallone (D-N.J.) said at today’s press conference that the infrastructure framework would build on and complement these efforts.

"So we have about $34 billion for clean energy," he said. "A lot of that is for updating the electric grid to accommodate renewables and also make it more resilient. We have about $1.5 million to replace leaking gas pipelines. We also have major investments in energy efficiency, which is obviously so important, and also to develop electric vehicles."

Transportation and Infrastructure Chairman Peter DeFazio (D-Ore.) touted the framework’s provisions aimed at boosting the resilience of projects to extreme weather events, which scientists say will become more common as the planet heats up.

The country’s infrastructure has "fallen apart. It needs to be rebuilt, and we can rebuild it in ways that are resilient for climate change, that use new and more climate-friendly materials that actually will be more durable," DeFazio said.

"We can actually build a 100-year bridge," he added. "And they have concrete now that can actually absorb carbon."

Pelosi said the framework would help "get people out of their cars" through its investments in high-speed rail and public transit.

That’s another longtime goal of climate hawks, who note that transportation recently surpassed the power sector as the country’s largest source of greenhouse gases.

The framework sparked a positive response from environmental and business groups — and a chilly reception from T&I Republicans.

"We appreciate Chairmen DeFazio, Pallone, and Neal laying out a framework for a major investment in a wide range of infrastructure that can help fight climate change and safeguard communities," Sara Chieffo, vice president of government affairs at the League of Conservation Voters, said in a statement.

"We look forward to digging into the details and working with these leaders to ensure that such a major infrastructure investment delivers on reducing climate and local air pollution, addresses racial and social inequality, and creates good, family-sustaining jobs."

Shannon Heyck-Williams, director of climate and energy policy at the National Wildlife Federation, said in a statement that House Democrats had "outlined a plan recognizing the scope of the challenge and opportunity before us."

The U.S. Chamber of Commerce took the opportunity to repeat its calls for Congress to pass an infrastructure bill this year.

"Today’s announcement from Speaker Pelosi and House Democrats is an important step forward on the path to rebuilding America’s infrastructure," U.S. Chamber of Commerce President Tom Donohue said in a statement.

"We urge Republicans and Democrats to come together this year to enact legislation to rebuild our core infrastructure platforms, including roads, bridges, and transit."

But T&I ranking member Sam Graves (R-Mo.), an outspoken critic of the Democrats’ Green New Deal, hinted in a statement that he disagrees with the framework’s climate provisions and would like to see more conservative priorities, such as streamlining the permitting process for large projects.

"I may not agree with all of the principles in the majority’s outline, but as the Republican leader of this Committee, I expect to play a constructive role in the development of infrastructure bills before us this year," Graves said.

"Any serious effort toward enacting infrastructure legislation must incorporate Republican principles as well."

He added, "The time for partisan posturing from House Democrat Leadership is over. On this Committee, we know the recipe for success in addressing America’s infrastructure needs is through partnership, so let’s get to work."