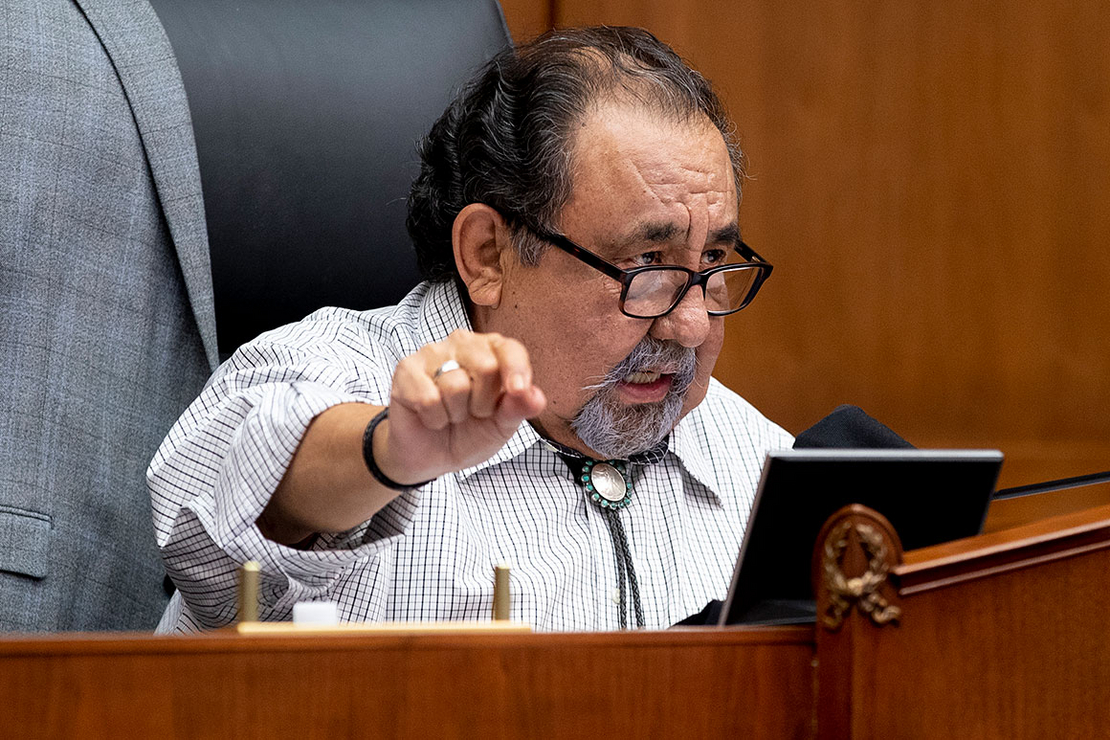 Democrats on the House Natural Resources Committee are prepared to move ahead with a roughly $31 billion reconciliation package as Republicans ready their attacks — on both the measure’s substance and the entire process surrounding its consideration.

“This week is not the time for the committee’s majority to be advancing partisan wish lists,” the lawmakers wrote, in part. “Thousands of Afghan refugees are arriving to the U.S. daily with no long-term resettlement plan. Hurricane Ida is ravaging the Gulf Coast. Wildfires are decimating vast swaths of our country, destroying homes, property, and wildlife habitats. A humanitarian, public safety and environmental crisis continues to rage as a result of this administration’s failure to secure our southern border.”

They called on Congress to return from recess to “tackle the critical needs of our country,” adding, “we cannot address these issues if we are bogged down in a morass of reckless spending.”

The Republican arguments aren’t specific to Natural Resources. GOP lawmakers across the Capitol are opposed to congressional Democrats’ intent to pass a $3.5 trillion infrastructure package in the coming weeks through the reconciliation process, a procedural maneuver that excludes the need for a single Republican vote in a 50-50 Senate.

Yesterday, Republicans on the House Energy and Commerce Committee also sent a letter to their Democratic counterparts asking them to hold hearings on their panel’s reconciliation bill prior to convening their planned markup (see related story).

But Democrats are likely to take special issue with the argument that Natural Resources Republicans are making, namely that a need to respond to recent natural disasters overrides the urgency to consider the committee’s pending reconciliation package.

The legislation, released last night but drafted in the days prior to Hurricane Ida’s landfall, would address the consequences of extreme weather events and prepare communications for the devastation currently affecting Louisiana.

At least one Democrat on the House Natural Resources Committee — Rep. Joe Neguse of Colorado, the chair of the Subcommittee on National Parks, Forests and Public Lands — in a tweet yesterday made the direct parallel to Ida’s wrath and the need to address the climate crisis.

“My thoughts are with the people of Louisiana and all those in the path of Hurricane Ida,” Neguse wrote. “Our communities cannot wait any longer for bold, urgent action on climate change.”

The Natural Resources bill would, among other things, allocate $50 million to NOAA to “improve weather data collection and provide science, data, information, and impact-based decision support services” to lessen the negative effects of extreme weather events, including hurricanes and sea-level rise, in insular areas of the United States.

It would provide $500 million to NOAA for addressing hazards along the coast, including sea-level rise.

The bill would also budget $100 million to the Fish and Wildlife Service to help habitats and species withstand extreme weather events — or mitigate the amount of damaged sustained during those events — and provide $100 million for climate adaptation centers through the U.S. Geological Survey.

As for wildfires, the House Natural Resources Committee bill would devote $900 million to the Bureau of Land Management to reduce wildfire risk through means such as “fire preparedness, fire science and research, emergency rehabilitation, rural fire assistance, fuels management activities [and] the renovation or construction of fire facilities.” An additional $100 million goes toward mitigating wildfire risk on tribal lands.

Republicans disagree with the Democratic approach to wildfire prevention, with Westerman — a former forester — and his colleagues touting legislation that would, among other things, remove certain National Environmental Policy Act restrictions. Supporters of the bill contend that these regulations are the frequent cause of delays in starting forest management projects.

The 117-page bill does not depart starkly from a four-page internal staff memo leaked last week, which laid out how the Natural Resources Committee planned to spend its $25.6 billion allocation and raise $6 billion in new revenue.

As expected, the legislation would repeal Congress’ 2017 green light to allow drilling in the Arctic National Wildlife Refuge and invest heavily in the creation of a Civilian Climate Corps, a green jobs training and placement program that will be funded through a variety of other accounts through the reconciliation process.

The bill would place $100 million in the Outdoor Recreation Legacy Partnership program, a competitive grant program administered through the Land and Water Conservation Fund specifically for urban parks, along with $100 million in the Every Kid Outdoors program, which supports free access to national parks for all fourth graders and their families.

And it would include protections against mining activities in Oak Flat — a holy site of the Apache people in Arizona — and the Grand Canyon (Greenwire, Aug. 27).

The Democratic staff memo last week also outlined major changes to the federal oil and gas program, but the bill’s text rolled out last night fleshed out the details of what those reforms would look like.

The reconciliation package proposes raising the royalty rates that onshore oil and gas drillers pay to extract federal minerals from 12.5% — a rate floor set in 1920 — to 20%. Offshore leases would also be raised to 20%.

The measure also calls for upping the minimum bid for oil and gas leases from $2 an acre to $10 an acre, and cutting the length of fossil fuel lease terms in half.

It would institute new bonding requirements for oil and gas leases, stating that bonds would be considered “inadequate” at prices lower than $150,000 on a single lease. The bill also would impose new fees for offshore oil and gas leaseholders and apply royalties on all extracted methane. Barring emergency situations, that would include gas that is flared, vented, leaked or used at the well site.

In addition to restricting oil and gas drilling in ANWR, the committee’s reconciliation bill also would bar oil leasing in the eastern Gulf of Mexico and in the Atlantic and Pacific oceans. It would, however, allow for offshore wind leasing on the outer continental shelf, reversing a ban from former President Trump.

Shortly before the 2020 election, Trump issued a sweeping order to prevent offshore oil drilling off the Atlantic coasts of Florida, Georgia, South Carolina and North Carolina — four critical swing states where vast constituencies oppose such activity. But the order also included a ban on other types of energy production, too, including offshore wind, a nascent sector with barely a footprint in the South Atlantic.

The move was unexpected, as offshore wind opposition has been localized in beach communities of the Northeast, where large offshore wind proposals are in their infancy. Meanwhile, states have largely favored offshore wind because it represents potential economic boons for ports, manufacturing, construction and trades.

Advocates are now hopeful the Biden administration will act unilaterally to promote opportunities for offshore wind development in the southern coast and the Gulf. But experts doubt executive action here will be possible: When the Trump administration tried to lift an offshore energy ban in the Arctic that had been instituted by the Obama administration, a federal judge blocked the effort and said only Congress has the right to undo presidential energy moratoria.

In this way, the Natural Resources Committee would answer that call for proactive congressional action.