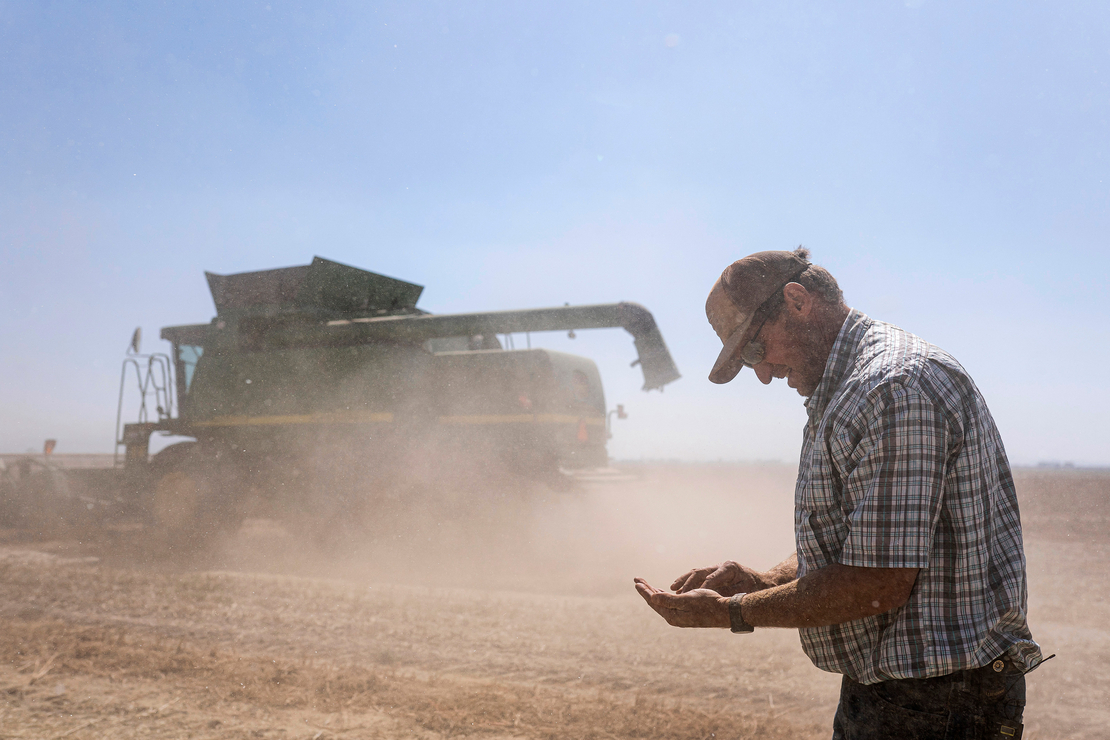 Climate change and decades of industrialized food production are hurting U.S. agriculture, witnesses told the House Agriculture Committee yesterday at a hearing on the role of research in battling the crisis.

Grain yields are already falling in the U.S., and American agriculture’s heavy reliance on chemicals to boost crop production is making farming less sustainable in some ways, a variety of witnesses said.

Yesterday’s hearing highlighted the challenges facing American agriculture as Congress begins crafting the 2023 farm bill, which will authorize programs across the Department of Agriculture for five years.

And while lawmakers in both parties said they support more research, promoting or discouraging certain farm practices remains divisive and will shape aspects of the forthcoming legislation.

Republicans continue to support the use of chemicals in agriculture while bemoaning rising prices. At a later press conference, top Agriculture Republicans unveiled a bill that would ease federal agriculture regulations with the goal of lowering prices.

At the hearing, some of the most potentially alarming testimony came from Benjamin Houlton, a professor of ecology and global development at Cornell University in Ithaca, N.Y., who said researchers there found that U.S. grain yields are 20 percent lower due to climate change than they would have been without that influence — the equivalent of seven years of production.

That decline could double by 2050, he said, along with other types of farming yields in the U.S. and around the world, just as a growing population needs more food.

“We are already witnessing the devastating impact of climate change on food production in the U.S. and worldwide,” Houlton said, adding that further research into cutting greenhouse gas emissions and sequestering carbon can turn that situation around.

The disturbing assessment contrasts to huge gains in U.S. farm production over the decades — nearly tripling since the 1940s, said Rep. Glenn Thompson of Pennsylvania, the top Republican on the committee — even as farmers have needed less land, fewer animals and less feed to establish that record. “It’s an amazing success story,” he said.

It’s true that farmers have accomplished those gains through improved genetics, as well as more sophisticated fertilizers and pesticides, and with the help of the Department of Agriculture.

But Michael Vance, a rancher in Gainesville, Texas, said the chemicals and practices tied to the “Green Revolution” in the 1950s and 1960s may not be as well-suited to the challenge at hand, He testified on behalf of the Noble Research Institute.

Farmers are too reliant on costly chemicals and other expenses, he said, and should put greater emphasis on naturally building healthier soil — a cause the federal government could encourage with more programs that focus on the “entire ecosystem” of a farm and combine public and private funding, including for research.

Soil is now “dramatically less productive” than decades ago, Vance said, but could be restored in some areas through managed grazing of livestock, a focus of the Noble organization.

“We’re talking about big, big ranches that were set aside for purely conservation, and after five to 10 years in conservation, they’re starting to see detrimental effects to no grazing,” Vance said.

While Vance, as the one farmer on the panel, cautioned about farming’s reliance on technology and chemicals, those methods have strong support on the committee, especially among Republicans who see the Biden administration as an adversary. The administration has moved to sharply limit the use of pesticides such as the weedkiller dicamba.

Less tilling can mean more weeds, and cover crops grown when the main cash crop isn’t in the ground are generally killed before the main crop is planted, although researchers have experimented with equipment to get around that issue (Greenwire, June 16, 2016).

“Those practices require that certain chemicals be used,” Scott said.

Farmers’ chemical needs have much become much more expensive this season — pesticide prices have tripled in some cases, said Rep. Don Bacon (R-Neb.) — and show little sign of easing.

Among the witnesses yesterday was Sylvie Brouder, an agricultural researcher at Purdue University who also sits on EPA’s Science Advisory Board, dealing with agricultural issues.

Although the panel has met just twice for multiday sessions during the Biden administration, she told Scott during questioning, she served on the panel during the Obama administration as well and said “we do a fairly rigorous job” before making recommendations to the administrator.

That panel plays a role in a wide variety of subjects, including the definition of the “Waters of the United States” subject to Clean Water Act regulations. Scott asked her to provide any recommendations the panel has made to EPA Administrator Michael Regan.

Democrats on the committee stuck to climate change, with Rep. Jim Costa (D-Calif.) touting his state’s efforts to reduce emissions from big dairy farms — a drop of 45 percent in recent years, he said, thanks to manure digesters that convert manure gas to energy.

“I think it all comes down to sustainability,” Costa said. “At end of the day, that’s going to determine how we do it in a way that economically makes sense.”

A bipartisan group of lawmakers were coalescing around legislation to bolster carbon sequestration in farming, the “Growing Climate Solutions Act” — H.R. 2820 and S. 1251 — but it has yet to reach the House (E&E Daily, April 27).

Prices a focus for GOP

But committee Republicans said the Democrats’ emphasis on climate change distracts from more immediate troubles facing farmers, such as inflation, which they also highlighted at a news conference later.

At that news conference, Thompson said he and others were introducing a bill on a number of policy goals they said would ease regulations on agriculture with the aim of lowering prices.

The measure would roll back the Biden administration’s revisions to the National Environmental Policy Act, restore the “Waters of the U.S.” clean water regulations adopted by the Trump administration and forbid cancer-warning labels on the weedkiller glyphosate. It would also encourage domestic production of phosphate and potash, important fertilizers hit with price increases due to the war in Ukraine.

Their bill follows a letter dozens of House Republicans sent to President Joe Biden earlier this week on similar themes.

“The American people are hurting,” Allen said, adding that he overheard someone complain on an elevator yesterday about paying $12 for a dozen eggs. The Department of Agriculture said the average retail price nationally was $2.78 a dozen on June 10, still a sharp 40 percent increase from a week earlier.

“I don’t know how much they have to sacrifice to this climate God to deal with these issues, but obviously we were created to adapt and to have dominion,” Allen said. “I mean, the whole economy is upside down.”