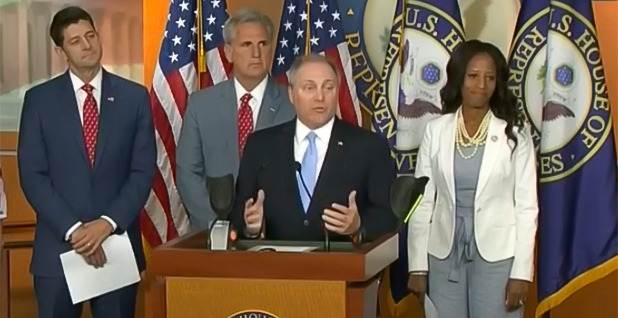 Lawmakers yesterday kicked off the first round of partisan bickering over an anti-carbon-tax resolution — political theater that will set the tone for the rollout of Republican carbon-pricing legislation next week.

It advanced through the House Rules Committee 7-3 along party lines, and most observers expect it to pass when it hits the floor tomorrow, despite the many Republicans who have joined the Climate Solutions Caucus.

The vote comes as Rep. Carlos Curbelo (R-Fla.), founder of the bipartisan caucus, prepares to roll out his own legislation next week to put a $23 levy on carbon (Climatewire, July 17).

Democrats suggested yesterday the Scalise resolution would effectively be a rebuke of Curbelo, as well as other Republican statesmen who have lobbied for carbon taxes in recent years.

"We’ll do this. It will change no votes," said Rep. Earl Blumenauer (D-Ore.), who spoke against the measure before the Rules panel. "We’ll trot something out on the floor of the House that will bear no relationship to any of the proposals that have been introduced, including by my Republican friend Carlos, who is sort of being tarred by this."

Republicans largely talked around that argument. But for the most part, they also acknowledged that climate change is happening, arguing instead that a carbon tax is not the most efficient way to reduce emissions.

Rep. Bradley Byrne (R-Ala.), for instance, said reduced emissions in the U.S. over the past decade can be attributed in large part to advances in hydraulic fracturing.

"Since that last effort here to pass a serious carbon bill in 2009, there have been great strides in America in reducing our carbon footprint per person, and it’s all attributable to the rise of the use of natural gas," he said.

But others pointed to potential negative effects for small-town America and the coal industry. Rep. Liz Cheney (R-Wyo.) hailed the resolution as punctuation to the end of what she called the "war on coal" during the Obama administration.

"From my perspective, our coal is a national treasure," she said.

Off Capitol Hill, advocacy groups have geared up for the fight.

Democrats on the Rules panel suggested that the Koch brothers were partly responsible for efforts to push the resolution to the floor, and indeed, Koch Industries Inc. penned a letter of support earlier this week (E&E News PM, July 16).

And yesterday, the League of Conservation Voters wrote its own missive to lawmakers, asking them to oppose the resolution.

"Unfortunately, this resolution is the latest example of the radical leadership in Congress and the polluter-backed organizations pushing this resolution denying the need to act on climate change," wrote LCV President Gene Karpinski.

"This resolution fails to consider the harmful impacts unchecked climate change is already having on our families, our communities and our economy."

But some climate-conscious lawmakers are unconcerned. Curbelo said that although he will oppose the resolution, he doesn’t think it will be the final word on the topic, even for Republicans who vote in favor.

After all, the Floridian noted, he voted for the measure when it was last on the floor in 2016, and now he’s set to unveil carbon tax legislation.

"This is symbolic, nonbinding — it’s a defensive move," Curbelo said earlier this week. "It shows that those that are calling for this resolution to be considered know that things aren’t trending their way."

Rep. Ted Deutch of Florida, Curbelo’s Democratic counterpart on the Solutions Caucus, yesterday urged the group to band together and oppose it.

"Every Member of Congress, especially caucus members, should keep all options available and not preempt an effective strategy before we even have an opportunity to debate it," he said in a statement.

"I urge my colleagues of the Climate Solutions Caucus — Democrats and Republicans — to vote no on this damaging, anti-climate resolution. A ‘yes’ vote would be sorely disappointing to everyone who believes this caucus can help shape a rational response to climate change."

At least some caucus Republicans will likely vote for the measure, and several did not respond to requests for comment on how they will vote.

But as several lawmakers noted yesterday, the carbon tax described in the resolution won’t closely resemble Curbelo’s bill or most other proposals floating around Congress.

"I would think that we would be better served to not deal with caricature," Blumenauer said. "Have an honest-to-God hearing about a real piece of legislation, to be able to go back and forth, and I think there would likely be less disagreement than what you’re going to get by introducing this resolution."