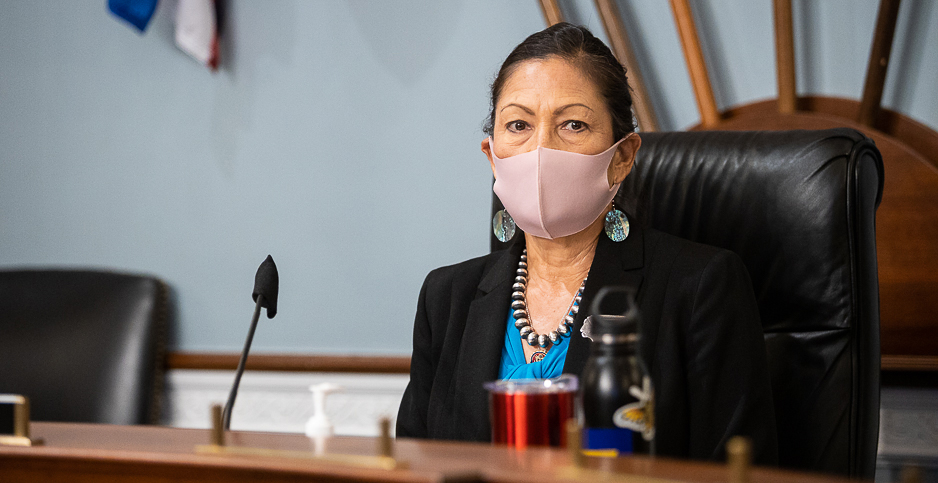 As President-elect Joe Biden showcased his latest round of Cabinet nominees Saturday, New Mexico Rep. Deb Haaland (D) asserted she is "ready to serve" at the helm of the Interior Department.

But House Democratic leaders want her to cool her heels a bit.

House Majority Whip Jim Clyburn (D-S.C.) and others are encouraging the Biden administration to delay sending nominations — including those of Haaland and Ohio Rep. Marcia Fudge (D), who has been named to lead the Department of Housing and Urban Development — to Capitol Hill, perhaps until after a March special election to replace Louisiana Rep. Cedric Richmond (D).

Richmond is set to join the Biden administration as a senior adviser.

A Clyburn aide confirmed to E&E News that the congressman has floated the staggered schedule, which would be aimed at guarding Democrats’ majority in the House, currently set to be just 220 members when the 117th Congress convenes next year.

That would mark the slimmest majority since World War II. When all 435 House members are seated, the chamber requires 218 votes to pass legislation (E&E News PM, Dec. 16).

"We need to manage something like this," Clyburn told the Associated Press, which first reported his push to space out the nominations.

Representatives for Haaland and Biden did not respond to requests for comment.

One source familiar with discussions told E&E News that the strategy of staggering Haaland and Fudge’s nominations had not yet been discussed inside the Biden campaign, while another source confirmed that the scenario Clyburn outlined is likely to take place in some form or another but said the logistics are still being worked out.

Either way, Haaland will remain a member of Congress until she is confirmed by the Senate, which could take as little or as much time as the Senate and the White House want.

Biden will decide when to formally nominate Haaland, at which point her nomination is placed on the Senate calendar and the Energy and Natural Resources Committee begins to discuss scheduling her confirmation hearings.

Typically, individuals tapped for Cabinet postings prior to Inauguration Day are formally nominated the day that the president is officially sworn into office, which sets the gears in motion on Capitol Hill.

Haaland’s case could be different, both in the timing of her nomination but also in terms of leadership asking her to continue taking House floor votes between being nominated and being confirmed, which is one scenario under consideration.

This would break with tradition of sitting members of Congress declining to participate in legislative business as they await confirmation.

But Bears Ears Inter-Tribal Coalition Executive Director Pat Gonzales-Rogers offered a more optimistic take on the potential timeline of Haaland’s installment at Interior and the precedents a delayed confirmation would break.

"We obviously look forward and are very excited to work with Congresswoman Haaland," said Gonzales-Rogers, whose group represents the Hopi Tribe, Navajo Nation, Ute Mountain Ute Tribe, Pueblo of Zuni and Ute Indian Tribe. "From the perspective of Native time and Native patience, this is a fairly small drop of time relative to what we have endured," he said.

It remains to be seen whether the Biden administration will be swayed by Clyburn’s arguments.

Numerous stakeholders in the Interior Department, who did not want to speak on the record, doubted the incoming administration would hold up its top officials for months — particularly as it looks to unwind regulatory and other changes implemented by the Trump administration.

But Weiss did not rule out concern that Haaland’s nomination could be held up by Senate Republicans, pointing to recent comments from Wyoming Sen. John Barrasso, who will chair the Senate Energy and Natural Resources Committee if Republicans hold their majority.

"It’s not going to be a garden party if the Republicans are in the majority. These nominees are going to have to run the gantlet," Barrasso said on "Fox News Sunday."

Weiss noted that the Trump administration failed to nominate leaders to key posts, including the Bureau of Land Management.

"I certainly hope Sen. Barrasso and Majority Leader [Mitch] McConnell [R-Ky.] won’t try to tie up President Biden’s nominees," Weiss said. "They have a constitutional responsibility to give those nominees a hearing and a vote."

Even if there is a delay in confirming Haaland — whether because of GOP opposition or because House Democratic leaders succeed in stopping the drain from the House — the Interior Department would not lack for leadership.

Under the Federal Vacancies Reform Act of 1998, the Biden administration could tap a temporary appointee to lead the agency.

According to a Congressional Research Service analysis, that typically means the "first assistant" — at Interior, that is the deputy secretary post — becomes the default leader.

But the president may also appoint a senior agency official or anyone serving in an "advice and consent" post to take the helm.

Institute for Energy Research President Tom Pyle noted, however, that any temporary leader at Interior would fulfill more of a "caretaker" role than attempting to execute the new administration’s priorities.

"It’s important to have the leadership installed because that person sets the agenda [and] has a more direct link to the White House," Pyle said. "A career staff serving as a caretaker would be less likely to want to move quickly and have a bunch of things well in process when the boss comes in. It will be more measured."

But from Pyle’s perspective, delaying the nomination would be beneficial: He said that Biden’s campaign promises would "lead to disastrous consequences for oil and gas producers, coal miners, ranchers and those who enjoy using motorized vehicles for recreation."

"It would be a bonus because the goal here will be to try to delay as much of this as possible because the midterms are right around the corner," Pyle added, suggesting that the Biden administration and Democrats may need to ease off the gas ahead of the 2022 midterm elections. "That’s the downside for them to not move expeditiously."