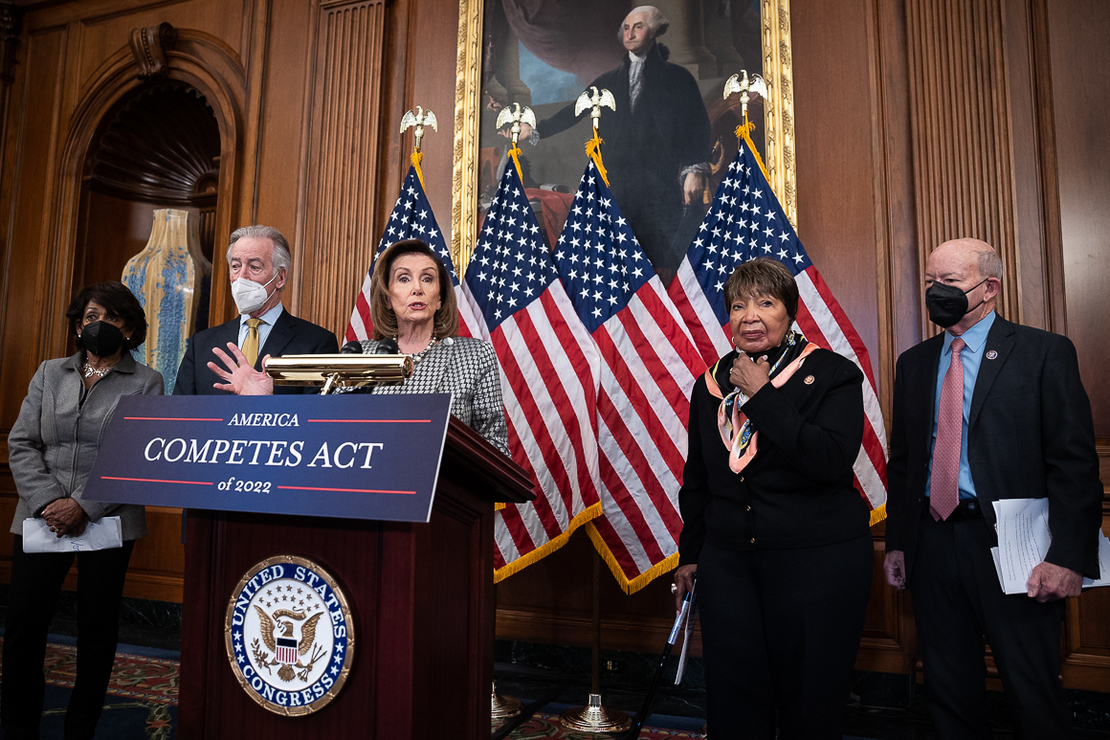 The House passed a sprawling competition and innovation package this morning that would boost Department of Energy and National Science Foundation spending, along with promoting international climate action.

House passage, 222-210, will lead to conference negotiations with the Senate, which passed its own competition bill last year. The Senate version is more bipartisan and less focused on environmental action.

Democrats this morning defended the approach in the face of relentless Republican criticism. The GOP said the bill was not excplicit enough in its focus on China and, in some ways, seemed to boost the Chinese Communist Party.

“The ‘America COMPETES Act’ will ensure that American preeminence in manufacturing, innovation and economic strength can outcompete any nation,” House Speaker Nancy Pelosi (D-Calif.) said during a press conference with several other top Democrats.

“Do you know how many chips are in a car? One thousand chips in a car,” she continued. “In an electric car? Two thousand chips. So just think of what this is going to mean to the automotive industry, when we have domestic, made-in-America chips readily available, and not be at the mercy of other countries.”

During floor debate, Steel said, “They cannot allow the CCP to ignore all their responsibilities.”

Rep. Joaquin Castro (D-Texas) agreed with pushing China to meet its climate obligations, but said, “This is a bad way to do it.”

But in the end, Rep. Adam Kinzinger of Illinois was the only GOP member to support the broader package. Rep. Stephanie Murphy of Florida was the only Democrat to vote no.

‘And so much more’

The House bill — which is based on bipartisan legislation from the House Science, Space and Technology Committee — would authorize nearly $130 billion in research and development spending across DOE and the National Science Foundation for a host of technologies seen as critical to the 21st-century economy, like artificial intelligence, supercomputing and advanced manufacturing.

H.R. 4521, the “America COMPETES Act,” contains the first wholesale reauthorization of DOE’s Office of Science. It would set an initial authorization of $8.8 billion in fiscal 2022, and the amount would rise to $11.1 billion by fiscal 2026. The office is currently funded at $7 billion.

Rep. Eddie Bernice Johnson (D-Texas), chair of the House Committee on Science, Space and Technology, praised her counterpart, ranking member Frank Lucas (R-Okla.), for his help in putting the bill together. Lucas, however, opposed the broader package.

Johnson said, “We are building clean energy solutions, addressing climate change and crisis, reinforcing our national security, enhancing our semiconductor research and manufacturing capabilities and so much more.”

The National Science Foundation would see similar increases under the House bill, with an initial authorization of $11.1 billion for fiscal 2022. That amount would grow to $14.5 billion by fiscal 2026.

Democrats touted the bill’s $53 billion in emergency appropriations to help jump-start domestic manufacturing for semiconductor chips, also seen as a linchpin of the effort. Shortages have caused supply chain issues across a host of technologies, including vehicles and solar panels.

Other environmental provisions include:

But there are significant differences between the chambers that conference negotiators will have to hammer out. Schumer this week downplayed those differences.

“Actually, the framework that [the House] set up and the framework that’s in the [Senate] ‘USICA’ bill are not that far apart,” Schumer told reporters on Tuesday. “I believe all the gaps are very bridgeable. We’re having productive discussions with the House Democrats.”

The Senate bill, formerly known as the “Endless Frontier Act,” would authorize $17 billion for DOE’s national labs over five years in addition to nearly $80 billion for the National Science Foundation and a new technology commercialization directorate at the agency.

Lawmakers added the lab money after uproar from energy-focused lawmakers and concerns about competition and overlap between DOE and NSF. The Senate bill moved with bipartisan support on a 68-32 vote in June last year (E&E Daily, June 9, 2021).

Despite the legislation’s bipartisan origins and goals, some Senate Republicans grumbled about spending. In the House, the GOP said the legislation should have been called the “America Concedes Act.”

Among their top targets, Republicans derided the bill for including an $8 billion authorization for the Green Climate Fund, a U.N.-backed resilience program meant to help developing nations address climate change.

They also accused Democrats of attaching a “Solyndra-like slush fund” that would create a new DOE grant program to distribute $600 million annually for five years to help bolster the domestic supply chain of solar manufacturing components.

“Instead of embracing free markets and American ingenuity, this bill tries to copy that type of approach of centralized industrial policy and massive government handouts that benefit the political allies.”

Pelosi said today, “Hundreds of members of Congress have been involved in putting this legislation together, overwhelmingly bipartisan in its development regardless of how the Republicans, politically, choose to vote today.”

Young said this week, “I can’t fault my Republican House colleagues for not supporting a piece of legislation that doesn’t reflect their ideas and their input.”

The Republican added, “My hope is, of course, is that the process will continue to move forward, the Democrats pass this bill, and then we can go to conference and come up with a piece of legislation that’s more reflective of what we produced here. I know that a number of my Republican friends in the House are very open to supporting whatever we produce in the conference.”