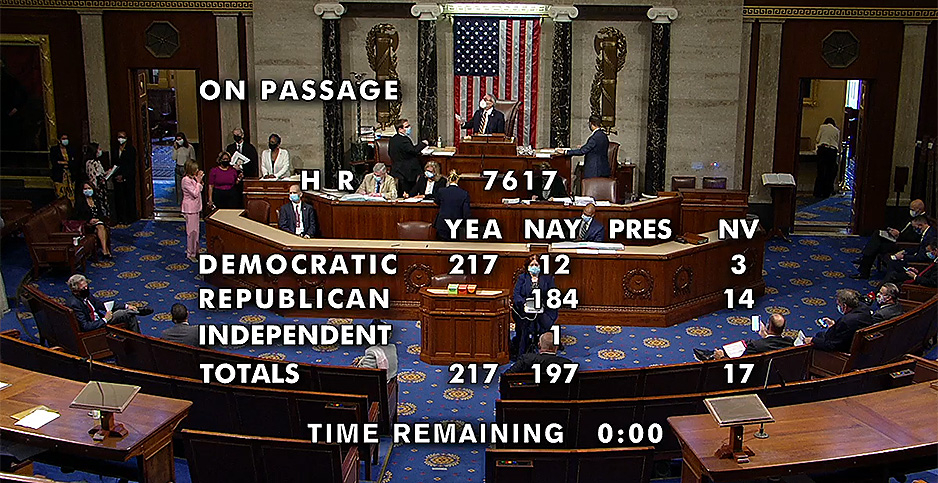 House Democrats today passed a $1.3 trillion spending package that puts them at odds with the Trump White House over Department of Energy funding priorities and would block permitting for the Pebble mine in Alaska.

The House backed the package, H.R. 7617, with the fiscal 2021 Energy-Water, Transportation-Housing and Urban Development, Commerce-Justice-Science, Defense, Labor-Health and Human Services-Education, and Financial Services-General Government bills. The vote was 217-197.

The chamber rapidly moved through more than 300 amendments to the minibus over the past two days, including to boost spending on weatherization programs by $250 million and increase energy efficiency and conservations grants by $250 million.

There were only a handful of energy and environment policy add-ons, which included an amendment to block permitting for the Pebble gold and copper project in southwestern Alaska.

Another approved amendment would bar the administration from leasing space in the Strategic Petroleum Reserve to foreign countries (E&E Daily, July 31).

DOE would receive $41 billion under the bill, an increase of $2.3 billion from the level enacted into law for fiscal 2020. Much of that spending increase would go toward nuclear weapon modernization, which would see a $1.3 billion hike.

The White House has threatened to veto the spending package. Among the many differences cited in a statement of administration policy is House Democrats’ decision to provide $435 million for the Advanced Research Projects Agency-Energy, which the president has repeatedly proposed scrapping.

"The administration believes that the continued funding of ARPA-E at $435 million makes little strategic sense given the existence of applied energy research elsewhere within DOE," the White House argued.

The House has now passed 10 of its 12 annual spending bills, save for the Legislative Branch and Homeland Security measures (E&E News PM, July 24).

The Homeland Security measure was originally part of the minibus but was pulled amid concerns from Democrats over having to take controversial votes over immigration and border enforcement funding.

Neither bill seems likely to come to the House floor; instead they’ll be negotiated as part of any final spending deal with the Senate.

But a final agreement remains a long way off, with the Senate yet to mark up any of its annual measures because of a dispute over riders.

Congress is now widely expected to need to pass a stopgap funding measure, or continuing resolution, before the new fiscal year begins Oct. 1 to maintain current funding and prevent a federal shutdown.

The CR is expected to last until after the elections or perhaps beyond the next presidential inauguration Jan. 20, meaning agencies are likely to be operating under current funding for the next several months.

Other funding and provisions in the latest package include:

The House had been expected to leave for its August recess after completing work on the minibus, but that has been delayed as the White House and congressional leaders continue negotiations over another pandemic relief bill.

House Majority Leader Steny Hoyer (D-Md.) told lawmakers on the floor earlier today to expect to be called back as soon as next week to vote on the package and said they would have at least 24 hours’ notice.

"We will not start the August district work period until we pass appropriate COVID-19 relief," he said.