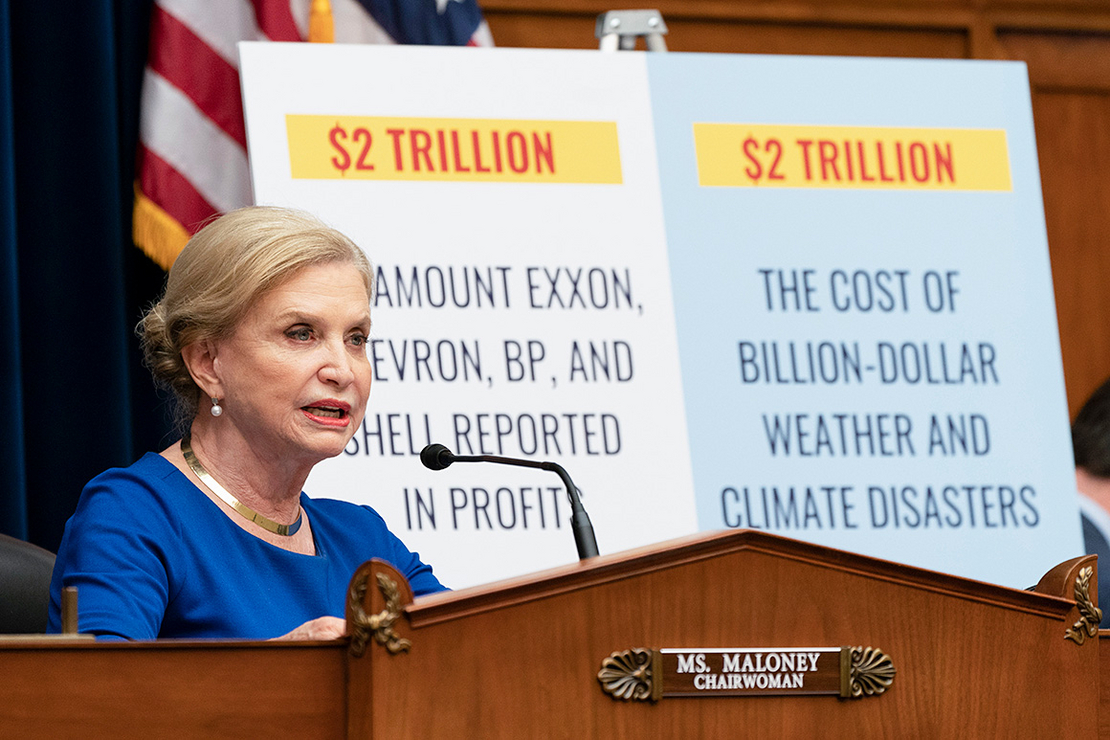 The subpoenas — issued to Exxon Mobil Corp., BP America Inc., Chevron Corp., Shell Oil Co., the American Petroleum Institute and the U.S. Chamber of Commerce — require the organizations to offer up communications about climate science among executives, information about funding for outside groups and documents related to any efforts to reduce greenhouse gas emissions.

“Despite repeated effort by the Committee and staff to obtain the documents necessary for the investigation, the six entities have failed to substantially comply with the Committee’s September 16, 2021, document requests,” Maloney wrote in an accompanying memo. “As a result, subpoenas are now necessary.”

Maloney announced her intent to issue the subpoenas at the conclusion of a high-profile hearing last week, featuring testimony from top executives at all six organizations (E&E Daily, Oct. 29).

Today’s announcement crystallizes the move and requires the organizations to deliver a huge trove of documents to the committee by Nov. 16. While Maloney said she has narrowed the scope of her initial request, the subpoenas ask for documents dating to 2015, likely totaling thousands of pages of emails, letters, marketing materials and detailed information about outside spending.

It’s a move Democrats have been hinting at for months that significantly steps up the committee’s investigation of the fossil fuel industry for its role in funding and spreading what Democrats say is false information about climate science.

Exxon, especially, has been in the committee’s crosshairs since this summer, when Greenpeace U.K. activists released a secretly recorded video of Keith McCoy — now a former lobbyist for the company — detailing its influence strategy and past funding of climate misinformation groups (Energywire, July 26).

Exxon spokesperson Casey Norton said the company has received the subpoena and has been “cooperating with the committee since their first contact months ago.”

“We have provided almost 130,000 pages of documents, including internal emails,” Norton said.

Maloney confirmed as much in her memo, but she also made clear that the committee is drawing a distinction between its inquiries about McCoy and its broader investigation of the companies.

In response to the Sept. 16 request, Exxon has produced 3,108 pages, mostly of it publicly available documents. But in a footnote to the memo, Maloney said “there is little doubt that Exxon could have made more significant document productions in response to the Committee’s September 16, 2021, requests.”

The footnote continues: “In response to the Committee’s separate August 6, 2021, request for documents related to Mr. McCoy, ExxonMobil produced 126,823 pages. Those documents were produced before the Committee launched its broader investigation and invited the CEO of ExxonMobil and other fossil fuel entities to testify.”

Maloney said what has been produced voluntarily is not enough, even if some of the companies have offered some limited internal communications. The committee extended the voluntary deadline to Oct. 25, just days before the hearing.

BP spokesperson JP Fielder said the company “is carefully reviewing the subpoena and will continue working with the committee.”

Shell spokesperson Curtis Smith similarly said the company would continue cooperating and would take the opportunity to “share with the Committee our views on climate and the progress we’re making against our goal to become a [net zero emissions] energy business, in step with society.”

An API spokesperson said the group would “continue to work [with] the Committee consistent with our right to associate and engage in free speech to address the challenge of climate change while producing affordable and reliable energy.”

Chevron did not immediately respond to a request for comment, while Chamber spokesperson Matt Letourneau indicated his organization is reviewing the subpoena.

Maloney, meanwhile, said she would move full speed ahead and would not have a vote on the subpoenas when the committee convenes for a markup later this week. Republicans had requested one, calling the subpoenas “partisan political theater” (E&E News PM, Nov. 1).

Ranking member James Comer (R-Ky.), Maloney said, raised an objection during the hearing before he had a chance to review the subpoenas.

“In light of the reflexive opposition to this investigation from Committee Republicans, it is clear that further consideration of the subpoenas at a Committee meeting would not serve any purpose,” Maloney wrote in the memo. “For all these reasons, I plan to proceed with issuing these subpoenas.”