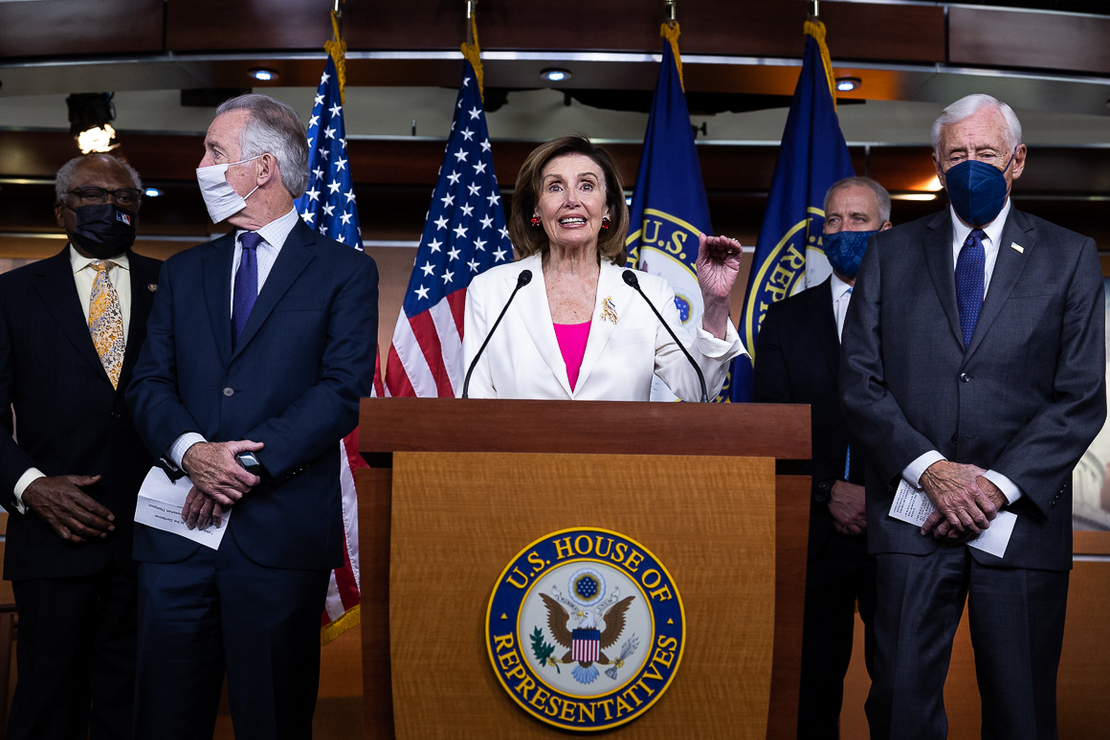 House Democrats passed their massive climate change and social spending bill this morning, leaving much of President Biden’s agenda in the Senate’s hands after weeks of internal bickering.

The $1.7 trillion reconciliation bill, known as the Build Back Better Act, passed 220 to 213 on partisan lines after a more than eight-hour protest speech on the House floor by Minority Leader Kevin McCarthy (R-Calif.), which forced Democrats to delay a planned vote last night.

McCarthy eventually relented this morning, clearing the path to passage shortly before 10 a.m. Every Democrat, except Rep. Jared Golden of Maine, voted "yes," including centrist deficit hawks and progressives who had been pushing for as much as $6 trillion in spending.

With roughly $550 billion for climate and clean energy tax incentives, the package would be the single-biggest investment in resilience and greenhouse gas emissions reduction that Congress has ever made.

The Senate is hoping to finish it up before Christmas, but the upper chamber remains a considerable hurdle, even after weeks of negotiation with Energy and Natural Resources Chair Joe Manchin (D-W.Va.) and other moderates.

"Our congressional delegation went to COP 26 in Glasgow and affirmed the commitment of this Congress to meet and beat our climate goals," House Speaker Nancy Pelosi (D-Calif.) said on the floor this morning, referring to the Democratic delegation that traveled to United Nations climate talks in Scotland earlier this month. "With this legislation, we achieve this for the children and for mother nature."

The vote capped off a weekslong political saga that saw Democratic leadership struggle to wrangle competing factions of the party and move a compromise version of their marquee legislation through the House.

Democrats had initially hoped to pass the legislation in September on a concurrent track with the Senate’s bipartisan infrastructure bill. Progressives, seeking leverage to prevent further changes to the reconciliation bill, had pushed for assurances, and even a vote, on the social spending package before they would offer their votes for the bipartisan legislation.

They eventually relented, as reconciliation negotiations solidified into a $1.7 trillion compromise. The bipartisan bill was signed into law Monday as a result (E&E News PM, Nov. 15).

But moderates then threw up a hurdle of their own, demanding to see scores from the Congressional Budget Office on the deficit impact of the reconciliation package before allowing it to proceed, forcing leadership to delay the House vote yet again.

Late yesterday afternoon, the CBO delivered with tables showing spending and revenue impacts for each committee’s slice of the bill, and the Senate finished a parliamentary scrub. Democrats quickly moved to make technical changes to the bill and set up a vote.

Then the night took an unexpected turn. McCarthy took the floor shortly after 8:30 p.m. and concluded his remarks at 5:10 a.m., breaking Pelosi’s own longest House speech record (E&E Daily, Nov. 19).

"With respect for those who work in this Capitol, and as a courtesy to my colleagues, I will be brief," Pelosi quipped as she began her own "magic minute" remarks this morning.

McCarthy’s speech made for a tense 12 hours. His sharp tone left Democrats searing and rolling their eyes, particularly in the wake of Republican supporters storming the Capitol on Jan. 6 and this week’s censure of Arizona Republican Rep. Paul Gosar, who posted an edited video on his social media showing him killing Democrats.

When it became clear they had the votes for passage this morning, Democrats cheered in the chamber and chanted, "Build Back Better," nearly drowning out the last few Republicans taking the microphone to announce proxy votes for their side.

"I don’t even listen to most of the speeches on the other side because they’re not fraught with meaning or fact," Pelosi told reporters this morning.

The negotiated product approved this morning is smaller than most Democrats would have liked across the board.

And they have been forced to avoid punitive measures to curb planet-warming emissions, both because of Manchin’s objections and because of the parliamentary rules that govern the reconciliation process Democrats are using to overcome the Senate filibuster.

The bill is nonetheless a massive investment that would be the biggest pillar of Biden’s agenda. While it’s not clear how much the legislation would reduce emissions, it would likely offer a major boost to Biden’s pledge to halve emissions by 2030.

The bill bundles together more than $300 billion worth of clean energy tax credits, including extensions and expansions of key renewable and electric vehicle incentives.

It would extend most key clean energy tax breaks through 2026, when Wyden’s approach — tied to emissions reductions levels — would kick in.

The bill also contains a compromise methane fee, which would rise to $1,500 per ton in 2025, paired with $775 million for methane reductions. It would offer billions more for transmission and Department of Energy loan programs, as well as a $29 billion green bank (E&E Daily, Oct. 29).

Republicans went after the bill for its climate provisions, with McCarthy repeatedly referencing high energy prices and likening the package to the Green New Deal. But climate ended up a unifying factor in the House that helped push some moderates over the edge, despite grumblings from Texas centrists and Manchin.

That marks a decisive shift in the politics of the issue from the last time Democrats attempted climate legislation just over a decade ago, when the Waxman-Markey cap-and-trade bill was blamed in part for losses in the 2010 midterms.

"As it relates to climate provisions, I have a bit of tolerance for not requiring that not to be paid for because I don’t believe the CBO estimates take into account the cost of inaction," Rep. Stephanie Murphy (D-Fla.), chair of the fiscally conservative Blue Dog Coalition who held out support for the reconciliation bill until the CBO score was released, told reporters yesterday.

This morning’s vote represented an interim victory for Democrats, moving them a step closer to a massive makeover of American social and climate policy, but it’s far from the end of the road.

Now, they’re waiting for the Senate, which could make major changes or even nix entire programs over the coming weeks. Manchin has already demanded Democrats toss out the Clean Electricity Performance Program, which would have been a major power-sector decarbonization program.

He has also raised objections to the methane fee and a new tax credit for union-made electric vehicles. Sen. Kyrsten Sinema (D-Ariz.), another key moderate vote, has voiced her own concerns, though she appears amenable to the climate provisions.

Pelosi acknowledged that reality this morning. While the Senate will get a chance to reshape the bill through its committee structure, she said, "Ninety-some percent of the bill was written together.

"There were some differences at the end, and we’ll deal with those as we go forward," Pelosi told reporters.

Still, Manchin has been difficult to pin down. Rep. Henry Cuellar, a Texas Democrat who voted for the bill but has opposed the methane fee, said yesterday he would keep lobbying Manchin to nix the provision.

Senate climate hawks are also still pushing to add a carbon fee to the package, a potential political minefield that House Democrats have largely eschewed (E&E Daily, Nov. 17). Manchin has also been skeptical of that idea, but Majority Whip Dick Durbin (D-Ill.) signaled his support for that effort yesterday during an event with the Environmental Law and Policy Center.

A price on carbon, Durbin said, "is the only realistic way to use market forces to achieve our goal of reducing greenhouse gas emissions."

House Democrats, however, are optimistic that the climate provisions in the bill won’t change much. House Energy and Commerce Chair Frank Pallone (D-N.J.) said he believes the methane fee is safe, given that it was negotiated with Senate leaders.

"There may be some additional changes, but in terms of paying for it and in terms of the actual substantive authorizing language, I think we’re pretty solid at this point," Pallone said.

"The fact of the matter is that over the last few months, and particularly in the last few weeks, we have been working with the senators — not only Manchin and Sinema, but also with the chairs of the committees in the Senate," Pallone added.