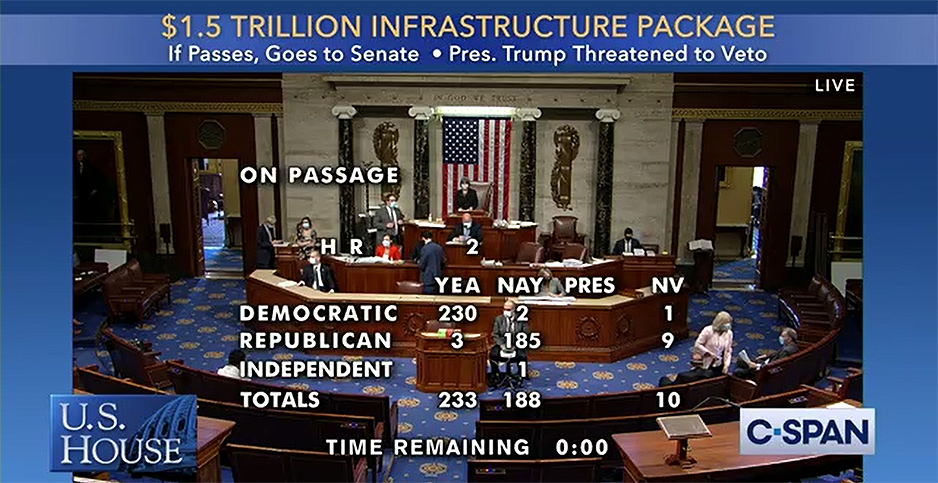 But the measure has virtually no chance of becoming law in its current form, with Republicans bashing its resemblance to the Green New Deal and President Trump promising to veto it.

Only two Democrats — Reps. Ben McAdams of Utah and Collin Peterson of Minnesota — voted against the measure. Three Republicans broke ranks to vote in favor of the bill: Rep. Brian Fitzpatrick of Pennsylvania and Reps. Chris Smith and Jeff Van Drew of New Jersey.

New Jersey is home to the embattled Gateway Program, which would replace the two aging rail tunnels under the Hudson River.

The Transportation and Infrastructure Committee approved an amendment from Rep. Tom Malinowski (D-N.J.) to direct the Department of Transportation to promptly issue a record of decision for an environmental impact statement for the project.

Lawmakers spent several hours on the House floor yesterday debating the remaining 170 amendments filed to the bill. Each vote took around an hour, given social distancing and cleaning protocols in place to protect members from transmission of the novel coronavirus.

In a win for clean water advocates, lawmakers voted 240-181 to adopt an amendment from Rep. Rashida Tlaib (D-Mich.) to authorize $4.5 billion per fiscal year over five years for lead service line replacement projects.

"Contaminated water has been a fact of life for too many communities, especially Black and brown communities," Tlaib said. "The time for environmental justice is now, and this amendment is a crucial step toward finally achieving that."

Rep. John Shimkus (R-Ill.), ranking member on the Energy and Commerce Subcommittee on Environment and Climate Change, voiced opposition to the proposal. He said it could end up subsidizing wealthy households and duplicating existing EPA programs.

But Rep. Dan Kildee (D-Mich.), who co-sponsored the amendment, said it would help prevent future tragedies such as the Flint water crisis, which affected his district.

The water utility sector broadly celebrated the bill for its inclusion of $40 billion in funding for the Clean Water State Revolving Fund.

"The current level of federal investment in clean water infrastructure is below five percent nationwide, a number that falls far short of what communities need from their federal partner," Nathan Gardner-Andrews, chief advocacy officer for the National Association of Clean Water Agencies, said in a statement.

In another win for environmentalists, lawmakers adopted by voice vote a bipartisan proposal to add a wildlife conservation bill.

"We are in the midst of an unprecedented biodiversity crisis. RAWA is a strong commitment to using innovative, state-based management to safeguard our nation’s environmental heritage for current and future generations," Dingell said in a statement after the proposal’s passage.

Collin O’Mara, president and CEO of the National Wildlife Federation, commended the lawmakers for working together to safeguard biodiversity.

"America’s wildlife is in crisis — with more than one-third of all fish, wildlife, and plant species at heightened risk of extinction in the decades ahead — and in desperate need of on-the-ground restoration efforts," O’Mara said in a statement.

"Thankfully, the House of Representatives is showing the country how strategic investments in natural infrastructure can recover wildlife, boost community resilience, and put Americans back to work."

Other energy and environment amendments that passed yesterday include:

The League of Conservation Voters praised House Democrats for advancing several proposals that could address environmental justice at a time of national reckoning over racism.

"We commend the pro-environment-led House for the pieces of this package and some of its amendments that directly confront environmental racism that exposes Black, Indigenous, and people of color to higher levels of toxic pollution," LCV Legislative Director Matthew Davis said in a statement.

The American Council on Renewable Energy thanked Democrats for including the "Growing Renewable Energy and Efficiency Now Act" from the Ways and Means Committee, which would extend and expand a host of clean energy tax breaks (E&E Daily, June 26).

ACORE President Gregory Wetstone said the measure would "go a long way toward providing a stable and effective policy platform" for boosting the clean energy sector, which has shed more than 620,000 jobs during the COVID-19 pandemic.

‘Cousin of the Green New Deal’

Senate Republicans, however, wasted no time in bashing the House’s infrastructure bill as a liberal wish list that echoes the Green New Deal, the progressive proposal to wean the country off fossil fuels.

"The Speaker has chosen to spend the House’s time this week on a multi-thousand-page cousin of the Green New Deal, masquerading as a highway bill," Senate Majority Leader Mitch McConnell (R-Ky.) said in a bombastic floor speech yesterday morning.

"Here are the four pillars of the Green New Deal," he continued. "No. 1, spend an insane amount of money. No. 2, check every far-left ideological box. No. 3, propose bad policies. And four, forget about making law from the very beginning so you can legislate in a world of pure fantasy.

"House Democrats are more committed to the Green New Deal than dealing with crumbling roads and bridges," Barrasso said in a statement after the bill’s passage.

President Trump, for his part, has threatened to veto the measure. The White House released a statement of administration policy this week saying the president would likely reject the bill if it reached his desk.

A litany of conservative and industry groups have also joined the chorus of opposition, including the U.S. Chamber of Commerce, the Competitive Enterprise Institute and Americans for Prosperity.

"With historic unemployment and tremendous unmet infrastructure needs, now is clearly a time for bold and ambitious action. There is nothing bold, however, about voting on a bill that does not and will not have the bipartisan support needed to become law," the U.S. Chamber said in a statement.

The Senate EPW Committee held a hearing yesterday on the role of infrastructure legislation in the nation’s economic recovery from the COVID-19 pandemic.

In contrast to the partisan tensions in the House, both Democrats and Republicans on the EPW panel have voiced strong support for the highway bill, which contains the first-ever climate title.

The Senate committee also approved water projects and drinking water legislation, and the chamber may bundle it all together.

Sen. Sheldon Whitehouse (D-R.I.) expressed hope that the House and Senate could iron out their differences during conference negotiations.

"I think that the chairman’s concern for bipartisanship in infrastructure could well be met by a conference of the Republican-controlled Senate and the Democrat-controlled House, if we can get it through the Senate floor," he said. "So I’m all for getting our bill through the floor and moving to conference."

Another possibility is that Congress will punt consideration of the infrastructure bill until after the November election.

In that case, lawmakers would need to pass a series of short-term extensions of the 2015 Fixing America’s Surface Transportation Act, which expires on Sept. 30.

Sen. Shelley Moore Capito (R-W.Va.) warned, however, that short-term extensions would foster a great deal of uncertainty for contractors and project developers.

While the EPW Committee was quick to complete the highway portion of the surface transportation reauthorization, other Senate panels have been slower to act.

The Senate Banking, Housing and Urban Development Committee is responsible for drafting the mass transit provisions in the bill, given its jurisdiction over urban areas where most subway and bus systems are located.

At a hearing in February, Democrats on that panel said they hoped to include climate-friendly provisions in the transit title (E&E Daily, Feb. 26).

More than four months later, however, the committee has yet to produce a draft of the transit title. A spokeswoman for the Banking, Housing and Urban Development Committee didn’t respond to a request for comment.

The Senate Commerce, Science and Transportation Committee has historically drafted provisions related to passenger rail and safety. A spokesman for that panel also didn’t respond to a request for comment.

The Senate Finance Committee has arguably the hardest job of all: figuring out how to pay for the legislation.

That will be a daunting task, to say the least, given widespread GOP opposition to raising the federal gas and diesel tax.

In the House, the Ways and Means Committee has similarly struggled to come up with a viable pay-for.