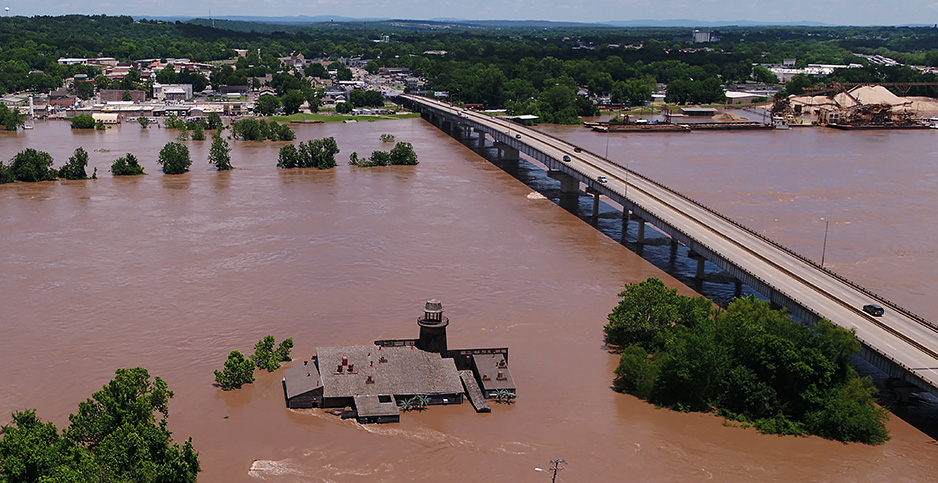 A water infrastructure bill that passed the House yesterday by voice vote doesn’t include the words "climate change" but is widely acknowledged as a lifeline for states — both Republican and Democratic — facing historic flooding and coastal erosion.

Republican Sen. John Barrasso of Wyoming, chairman of the Senate Environment and Public Works Committee, immediately praised the bill’s passage and noted that his committee earlier this year approved its own water projects legislation, which has yet to reach the floor.

"I look forward to working with the House on legislation we can send to the president’s desk to upgrade our water infrastructure and help the American people," Barrasso said.

The House bill would open up $10 billion in the Harbor Maintenance Trust Fund for the Army Corps of Engineers’ $40 billion backlog of critical projects to improve the nation’s ports, dams, flood-prevention infrastructure and reservoirs, and keep invasive Asian carp out of the Great Lakes.

Under the bill, the Army Corps would be required to conduct an inventory — and provide that study to Congress annually — of which civil works projects are or could become contaminated with per- and polyfluoroalkyl substances.

The National Audubon Society hailed the bill as critical to authorizing Army Corps efforts to restore and maintain wetlands and watersheds; invest in major ecosystems like the Everglades, Great Lakes and Mississippi River Delta; and address the threat of climate change through advancing resilient natural infrastructure.

The society has been an outspoken proponent of so-called natural infrastructure, such as restoring sand dunes, wetlands, oyster reefs and coastal forests in place of human-built projects like sea walls, jetties and levees.

Those projects, they say, can help protect the U.S. from the growing threat of more severe and frequent storms tied to climate change along with coastal development and population growth.

Even some Republicans in flood-prone states say the bill is critical to addressing historic flooding as they continue to mull over climate science.

Republican Rep. Bruce Westerman in an interview with E&E News said the bill is critical to addressing historic flooding in his home state of Arkansas, which last year witnessed record-breaking flooding when the Arkansas River rose by more than 40 feet, swamping the state’s aging levee system, destroying homes and farmland, and killing five people.

Westerman, ranking member of the Transportation and Infrastructure subcommittee focused on water, said he’s not quite ready to say he’s seeing climate change fuel that flooding, but he does see a warning.

"The textbook definition of climate change happens over centuries and millennia, but you see weather changes and you see cycles in weather, but we’ve seen more flooding and warmer temperatures, I think we’re seeing some effects of having more carbon in the atmosphere," he said.

"I’m not sure I’m ready to say we’re seeing the textbook definition of climate change," he said. "I think we’re seeing the warning symbols out there. But I also think we’ve got time to do proactive things like the ‘Trillion Trees Act.’"

Westerman praised the legislation for including provisions to adjust the cost share for projects in the inland waterways system; provide authority for communities experiencing repetitive flood loss; and support for long-term, resilient and nature-based solutions to protect communities from flooding.

The bill would also advance a long-stalled deepening project to protect water supply in Arkansas, known as the McClellan-Kerr Arkansas River Navigation System.

He cheered the bill’s inclusion of nature-based infrastructure and said the nation needs to start thinking longer term at things like widening floodplains and allowing water to flow into natural areas while maintaining flood control.

"We try to build these levees and out-engineer the river or nature," Westerman said. "Being an engineer, you think with enough skill, concrete and rebar you can do about anything. But we’re finding nature comes up with ways to overcome what was done."