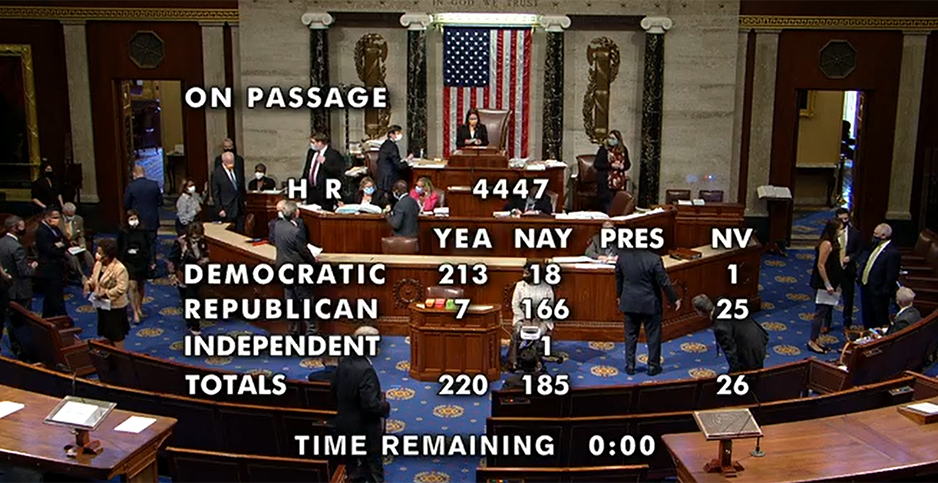 The House yesterday approved a broad clean energy package that would authorize billions of dollars to support research and development for technologies seen as critical in the fight against climate change.

But hurdles remain in that chamber, with Sen. Mike Lee (R-Utah) representing one of the remaining obstacles.

Even with the uncertainty in the Senate, yesterday’s House vote represents one of the most realistic chances Democrats have to enact broad clean energy policies this Congress.

Seven Republicans joined Democrats to pass the bill. Eighteen Democratic members, however, defected to vote against it.

Unlike other House efforts, this one was designed to spark negotiations with the Senate, Energy and Commerce Chairman Frank Pallone (D-N.J.) said on the floor.

"I don’t want anyone here to think that this is a message vehicle," Pallone said in the face of Republican opposition. "This is a vehicle that is exactly designed to try to reach an agreement on an energy package — not a big one — that we could actually get signed into law by the end of the year."

Other provisions in the House bill include:

The differences in the bills are by no means the only obstacle. It’s unclear still whether the Senate will even get to pass its package, with Lee insisting on amendment votes (Greenwire, Sept. 23).

Boosters will also have to overcome a partisan Supreme Court battle, a shrinking legislative calendar and other priorities, including appropriations and the pandemic.

There may also be apathy for energy action after the elections, and opposition from the Trump administration and House Republicans.

"This bill would raise costs for American consumers, leave rural Americans out to dry and ironically delay the deployment of new infrastructure," Energy and Commerce ranking member Greg Walden (R-Ore.) said of the House bill yesterday.

"This is not a serious energy package," he said. "This is big government, and the American people deserve better."

Liberal Democrats may also be a problem, especially if negotiations with the Senate result in a compromise deemed too moderate.

Aside from boosting energy technology through the Department of Energy, the House bill also includes support for electric cars and clean energy project financing. But critics said it was still not enough.

"This is not exhaustive of our solutions, and we have a lot of ideas in our caucus to debate and to prioritize," Speaker Nancy Pelosi (D-Calif.) said on the floor. "But this is an important next step."

Democrats got some environmental groups to endorse their bill yesterday, including Earthjustice, Environment America and the Natural Resources Defense Council, but the groups asked for negotiators to yank language they deemed too pro-fossil fuels (Greenwire, Sept. 24).

The American Petroleum Institute blasted the bill, saying it would add costs to consumers in the middle of a pandemic.

"A serious effort to tackle energy and climate challenges would focus on making measurable progress rather than ramming through a 900-page bill that dramatically redefines the nation’s regulatory system without any hearings or time for debate through regular order," said a statement from Frank Macchiarola, senior vice president of policy, economics and regulatory affairs.

The House added 91 amendments to the bill, including proposals to add spending and mandates, strengthening the measure’s climate credentials.

An amendment from Reps. Deb Haaland (D-N.M.), Alexandria Ocasio-Cortez (D-N.Y.) and Rashida Tlaib (D-Mich.) was the only stand-alone amendment vote.

The amendment, adopted 235-172, with four Republicans backing it, would bolster the bill’s wind and solar research and development money by increasing it by 50% compared with the base text.

It would also raise the DOE Office of Energy Efficiency and Renewable Energy’s authorization level to $3.4 billion by fiscal 2025. Its current operating budget is $2.85 billion.

"By making these investments, we are sending the message that renewable energy is our future and we are committed to making that a reality," Haaland said on the floor.

Republicans said the amendment would waste taxpayer dollars on technology that no longer needs such federal backing.

"The package is overfunded, incorrectly prioritized and a partisan process nightmare," Rep. Randy Weber (R-Texas) said on the floor. "In a way, I guess it’s fitting that this is the only stand-alone amendment we’ll consider today. It’s one that is seeking even more funding for one of this bill’s most misguided priorities."

The House adopted the other amendments in en bloc packages. Two — including one dedicated to wildfire response, planning and resilience — passed with mainly Democratic support. The others moved by voice vote.

Other amendments approved include: