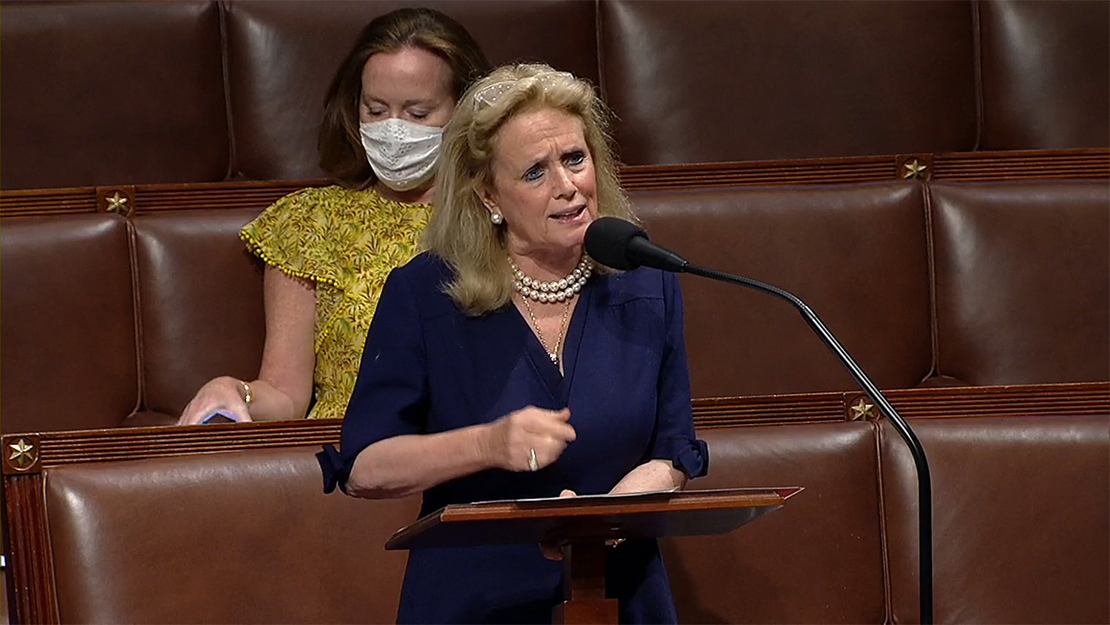 Sweeping legislation to crack down on "forever chemicals" passed the House today with support from a number of Republicans.

H.R. 2467, the "PFAS Action Act," from Michigan Reps. Debbie Dingell (D) and Fred Upton (R), cleared the chamber 241 to 183, with 23 Republicans joining their Democratic colleagues after an hour of heated debate, in which opponents lamented the bill as "overwhelming" and "heavy-handed."

Democrats championed the legislation as critical to putting pressure on EPA. "This is such a threat to the health and well-being of our children," said Speaker Nancy Pelosi (D-Calif.), speaking about the dangers linked to the chemicals, including cancer.

Many Republicans pledged a commitment to combating PFAS contamination while arguing the bill went too far without enough research underpinning its actions. "As many would say, we oughta follow the science," said Rep. Tim Walberg (R-Mich.).

But Upton spoke for the bill and challenged many of his GOP colleagues. "The bill is not perfect, it needs to see a number of constructive changes," said the Michigan Republican, standing firmly behind the effort.

Legislation pegged to contamination from per- and polyfluoroalkyl substances has abounded in Congress this year, but H.R. 2467 is the most ambitious of the bills. It would accelerate EPA’s current efforts to regulate two types of PFAS — PFOA and PFOS — in drinking water, in addition to pushing the agency toward an action it has debated: designating those two chemicals as hazardous substances under the Comprehensive Environmental Response, Compensation and Liability Act.

Other measures in the bill include a crackdown on PFAS incineration and efforts to stem discharge into waterways. H.R. 2467 would also regulate PFAS in water, air and soil under key statutes.

More controversially, the bill directs EPA to make a decision within five years about extending CERCLA designation to the entire PFAS family, targeting thousands of chemicals beyond just PFOA and PFOS.

That provision drew fire during the bill’s first journey through the House in the last session, when many Republicans argued it would impact essential products like medical devices. This go-round, those same critics have made similar points now within the context of the pandemic, with several noting PFAS chemicals are in some masks worn to prevent the spread of COVID-19 (E&E Daily, July 13).

Still, the bill’s diverse support reflects the widespread nature of PFAS contamination. During a press conference this morning, bipartisan members of the Congressional PFAS Task Force vowed commitment to passing the legislation and to continue introducing bills targeting the chemicals.

"There are very few task forces that form around one single issue," said Rep. Brian Fitzpatrick (R-Pa.), who offered hope for an "overwhelming bipartisan vote."

Energy and Commerce ranking member Cathy McMorris Rodgers (R-Wash.) emphasized the rejection of those amendments during remarks where she argued that those additions made in order "[do] not improve this bill."

Environment and Climate Subcommittee Chair Paul Tonko (D-N.Y.), meanwhile, offered that "overall, these are good improvements to the bill and they should not be controversial."

The amendments were approved 226 to 195, with eight Republicans joining Democrats in favor of the proposals. Another effort from Rep. Dan Crenshaw (R-Texas) to send the bill back to committee failed 218 to 204.

Republicans speaking on the House floor centered much of their criticism on the bill’s CERCLA provisions, which they said would have deep-reaching consequences.

"Like it or not, some PFAS chemicals have specific properties that aren’t easily addressed with other chemical types," said McMorris Rodgers. She argued "solar panels, wind turbine parts, medical devices and parts" would be among products jeopardized by the bill.

Another Republican, Rep. David Joyce (R-Ohio), made similar remarks implying the bill would ban all products containing PFAS. "We would not ban the entire periodic table because it contains arsenic and mercury," said Joyce.

Numerous CERCLA experts and EPA have countered those assertions, saying CERCLA is a statute dealing with legacy contamination and not manufacturing. A hazardous substance designation under CERCLA would not be a "de facto ban" on the chemicals.

But GOP members reiterated the argument on the floor. Rep. Kelly Armstrong (R-N.D.) was one of multiple lawmakers to assert that Democratic reassurances about CERCLA designation were false. "Unfortunately that is not true," Armstrong said.

Tonko retorted that the designation is "not a ban" and noted that hundreds of chemicals designated as hazardous under CERCLA continue to be actively used in commerce.

Dingell also grew testy over repeated Republican claims about the legislation’s implications. "It will not ban masks," the Michigan Democrat emphasized.

Multiple industries have fiercely opposed the bill, arguing it would have steep economic impacts and other severe implications for business.

In a statement following its passage, the powerful American Chemistry Council panned the bill as obstructive to innovation. "The PFAS Action Act takes decisions out of the hands of EPA’s career scientists who are best positioned to make regulatory determinations," the trade organization said. "It also applies a one-size-fits all approach to regulating the wide variety of PFAS chemistries."

A coalition of water associations, meanwhile, voiced strong opposition to the bill in a letter to lawmakers this week citing liability. "We believe water and wastewater utilities, when acting in accordance with all applicable laws, should be provided an exemption to protect the utilities and water customers from bearing the costs of cleanup," the groups wrote.

Such resistance is likely to continue as the bill heads to the Senate. Last year, the bill also passed the House with support from 24 Republicans before stalling in the upper chamber amid a veto threat from former President Trump.

But supporters contend that, with that barrier gone and the White House supportive of the legislation, the bill stands a chance this time. Asked about conversations with members of the Senate this morning, Dingell said only: "We’re talking."