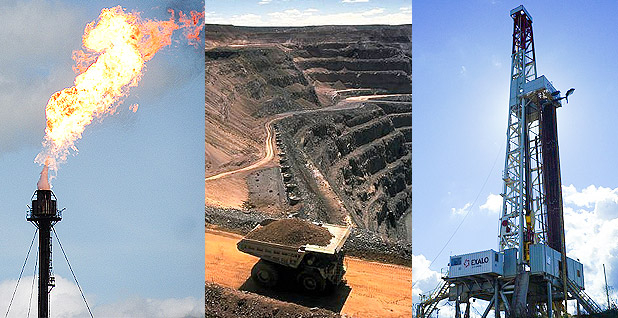 House lawmakers are preparing to take action against rules related to coal, venting and flaring, and mining and drilling disclosures. Photos courtesy of Richard Webb/Geograph (flare), Wikipedia (coal) and Pixabay.

House Republicans are beginning the process this week of throwing several landmark Obama administration rules into the fire. And the Senate could follow suit within days.

The House Rules Committee has scheduled meetings for today and tomorrow to discuss debate parameters for resolutions to void several energy and environment rules.

First up on the chopping block are the Department of the Interior’s Stream Protection Rule and the Securities and Exchange Commission’s regulation to require publicly traded resource extraction firms to report payments to governments. Lawmakers will also move forward with killing the Bureau of Land Management’s venting and flaring rule.

Congressional Republicans intend to use the Congressional Review Act, which allows members to review and revoke individual regulations issued within the last 60 legislative days. Each rule requires its own "resolution of disapproval" that can pass with a simple majority.

While Freedom Caucus members have urged the GOP to use the CRA to roll back as many as 300 Obama rules, analysts predict Congress will only have time for a few.

"Each one of those is entitled to 10 hours of debate in the Senate. So if you have five of them, you’ve taken up a week," said Bill Kovacs, senior vice president for the environment, technology and regulatory affairs at the U.S. Chamber of Commerce (E&E Daily, Jan. 3).

"That’s difficult because [the Obama administration was] pumping out rules like you pump gas," he said. "It’s going to be very hard for many of those rules to be reviewed."

Because a president is unlikely to kill a regulation promulgated under his or her authority, the CRA has the best chance of being signed following a transfer of power.

The law has only been used successfully once, when Congress and President George W. Bush overturned a Clinton administration rule setting ergonomic standards in the workplace.

If a regulation is terminated by the CRA, federal agencies are prohibited from reissuing it or drafting a similar rule in the future, leaving a lasting and uncertain impact on the regulatory system.

Public interest groups across the spectrum, including scientific and research groups, will be fighting against CRA attacks, Earthjustice President Trip Van Noppen said, warning members of Congress that they will be held accountable.

Topping the list of CRA repeals is the federal Office of Surface Mining Reclamation and Enforcement’s Stream Protection Rule.

A resolution from Reps. Bill Johnson (R-Ohio), Evan Jenkins (R-W.Va.) and David McKinley (R-W.Va.) would block the new water quality and monitoring standards for streams and groundwater near coal mines that took the entire Obama presidency to finish.

"The combination of unnecessary government overreach, regulatory duplication and harm done through this rule meets every test for CRA action," National Mining Association CEO Hal Quinn said in a statement.

Many of NMA’s member companies say the rule will eliminate one-third of coal jobs, but OSMRE analysis found it would actually create them. The agency said it was simply modernizing 30-year-old regulations.

"Unless they cover the health costs of every American who stands to be hurt by this rollback," added Grijalva, "they will have American lives on their conscience."

The United Mine Workers of America, however, sided "wholeheartedly" with the repeal effort in a letter today. The nation’s largest miners union has sided with coal operators, its traditional adversary, in blaming Obama regulations for sweeping coal layoffs.

"The basic structure of society is quite simply crumbling," Roberts wrote. "This cannot go on, especially when it is fostered by government regulations like the SPR."

House Natural Resources Chairman Rob Bishop (R-Utah) has his name on a resolution to slash BLM’s action to curb methane emissions from oil and gas flaring, venting and leakage on public and tribal lands.

Many energy industry advocates, including the Koch brothers, have backed Congress axing a rule they condemn as more unnecessary executive overreach. They say it runs afoul of the Mineral Leasing Act and is too burdensome.

On a conference call Friday, Bishop called the stream and methane rules "probably the most egregious of all the rules that we can think of."

Companies that work to detect and repair gas leaks, however, argue that increased oversight will yield economic benefits.

"If you’re trying to create good, blue-collar manufacturing jobs that can never be exported, this seems like a home run," said Allison Sawyer, CEO of Rebellion Photonics, a company that creates tools to pinpoint leaks (Energywire, Jan. 27).

Jason Libersky, co-founder and CEO of the engineering and analytics firm Quantigy, said collecting and selling methane, rather than allowing the gas to escape to the atmosphere, also saves one client about $2 million a year. Companies, however, say the process is not always economical for them.

Climate advocates, energized by a growing body of research that highlights the significant warming effect that the potent greenhouse gas has on the planet, urged the Obama administration for the regulations.

If Congress kills the rule, groups like the Sierra Club and Environmental Defense Fund have signaled they will continue to focus on local emissions standards, better ways to find leaks and more cost-effective ways to contain them.

Grijalva and other Natural Resources Democrats are planning a forum on the rule this week as part of their opposition to Bishop’s resolution.

Advocacy groups, however, sued to force the SEC into finalizing a second iteration of the rule. They said the U.S. was falling behind other countries that have since introduced their own reporting standards.