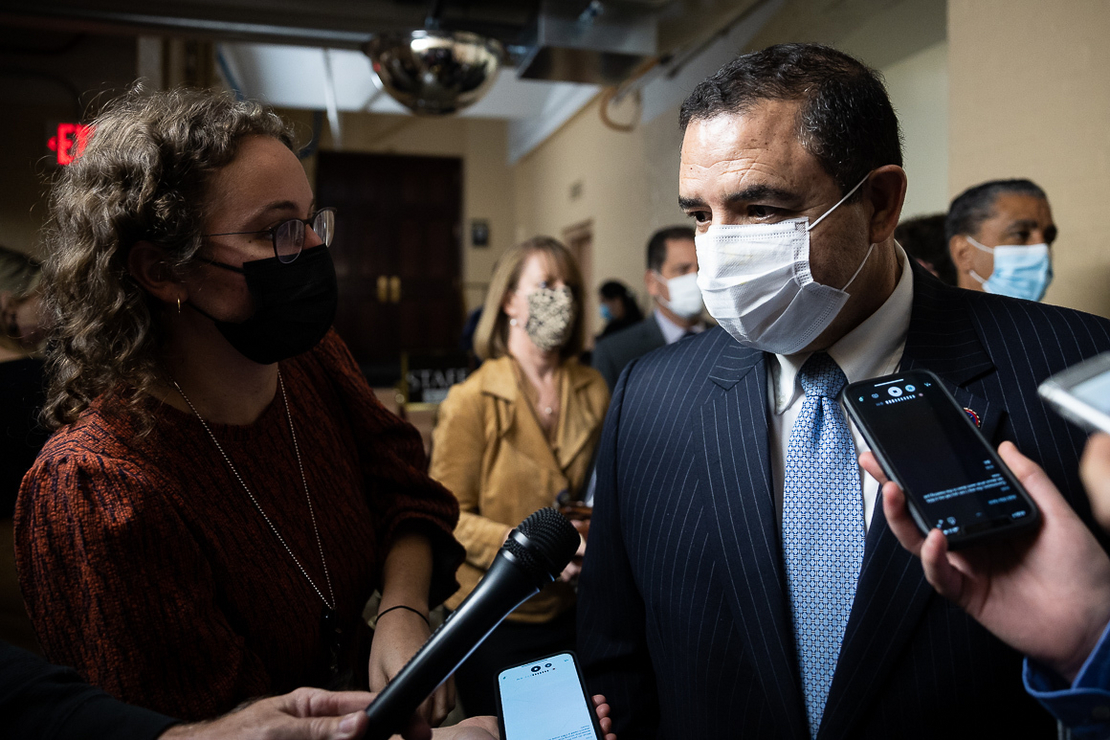 House Democratic leaders hope to nail down support for a $1.7 trillion climate and social services package today amid lingering worries over a proposed methane regulatory scheme and moderate worries about its cost.

Speaker Nancy Pelosi (D-Calif.) spent much of yesterday trying to secure the votes for passage. The measure moved though the Rules Committee last night, and Democrats have put the bill on the floor for an expected vote today.

Lawmakers are eager to act ahead of a congressional delegation heading to the U.N. climate change summit in Scotland over the weekend.

“Our members are engaged in very thoughtful deliberation with each other. And as I said to you before, 90 percent of this bill has been agreed to: House, Senate, White House. And written, we made some changes since last week. People need to familiarize themselves with it,“ Pelosi told reporters yesterday.

She conceded that she had been “really upset” that the bill did not pass last week, even after President Biden came to Capitol Hill to press the case. But it was clear from her buttonholing of members on the floor yesterday during an extended vote series that she is hoping to move the legislation quickly.

While most Democrats support the budget reconciliation legislation and a companion $1.9 trillion infrastructure bill, Pelosi is operating with a thin majority and cannot afford to lose more than three votes. She famously does not allow legislation to be voted on without knowing in advance that she has the votes to pass it.

The tight margin in the House has allowed fossil fuel-state lawmakers to raise concerns over methane. Meanwhile, moderates have demanded a detailed cost estimate, and Hispanic members are making a late push to include immigration provisions.

“Different people have different issues,” said Rep. Henry Cueller (D-Texas), a Blue Dog from a border district filled with small and independent energy producers. “I want to move the ball forward, but I still have concerns with the energy part.”

Cuellar has worries over how a proposal in the bill would affect small and independent companies. The provision would provide $775 million in loans, grants and other subsidies to help energy producers cut methane emissions and would impose steep fines for excess emissions — reaching $1,500 per ton beginning in 2025.

“We think that the new EPA rules can take care of the issues with climate and methane,” said Cuellar, referring to this week’s new rule from the agency to reduce methane emissions (Energywire, Nov. 3). He suggested that the provisions in the bill be dropped entirely. Earlier, he had suggested he would seek a carve-out for small producers.

Cuellar and Rep. Lizzie Fletcher (D-Texas), who also has expressed some opposition to methane fee proposals, were seen huddling on the floor yesterday with Pelosi, but it was not expected that any changes would be made.

Rep. Paul Tonko (D-N.Y.), the chair of the Energy and Commerce Subcommittee on Environment and Climate Change, said he was not expecting major changes to the methane proposal.

“There may be some fine-tuning, but for the most part, it’s going to stick,” said Tonko, stressing that methane is 80 times more powerful than carbon dioxide as a greenhouse gas and that reducing it is vital to making headway in curbing climate change.

Rep. Jared Huffman (D-Calif.), who has sharply criticized the $775 million in methane supports in the package, said he does not expect “any more concessions” for energy producers tied to the gas.

Cuellar though, noted that he might not need to resolve the issue in the House, with the evenly divided Senate yet to act. Senate Energy and Natural Resources Chair Joe Manchin (D-W.Va.) has already repeatedly used his leverage in the 50-50 chamber to derail several climate proposals in the bill and could do so again on methane.

While the Congressional Budget Office has not yet issued a score of the measure’s deficit impact, both the White House and Pelosi yesterday said that the revised bill would raise more than enough revenue to prevent the bill from adding to the deficit — a concern that Manchin and moderates continue to raise about the reconciliation push.

In a "Dear Colleague" letter — one of several this week — Pelosi noted the latest Joint Committee on Taxation estimate that the bill would raise more than $1.5 trillion from a combination of raising taxes on large multinational corporations and wealthy Americans.

That analysis did not include other pay-fors in the measure totaling another $650 million, which Pelosi said would additionally reduce the deficit.

“It is essential that the legislation is fully paid for and reduces the debt,” she wrote.

The clean energy tax title of the bill — which includes provisions from the House Ways and Means and Senate Finance Committees — comes in at just over $300 billion.

Among the tax changes incorporated into the latest version is a trimming of the extension of the nuclear production tax credit from eight years to six, as well as energy efficiency and e-bike incentives. Those provisions were scaled back to make room for new tax credits to encourage domestic production of semiconductors favored by key Democratic senators (E&E Daily, Nov. 4).

Absent from the revised bill is a 30 percent investment tax credit for dam improvements sought by the hydropower sector (E&E Daily, Oct. 26).

Northeastern members of the National Hydropower Association yesterday pressed Ways and Means Chair Richard Neal (D-Mass.) for the credit to be added to the reconciliation package.