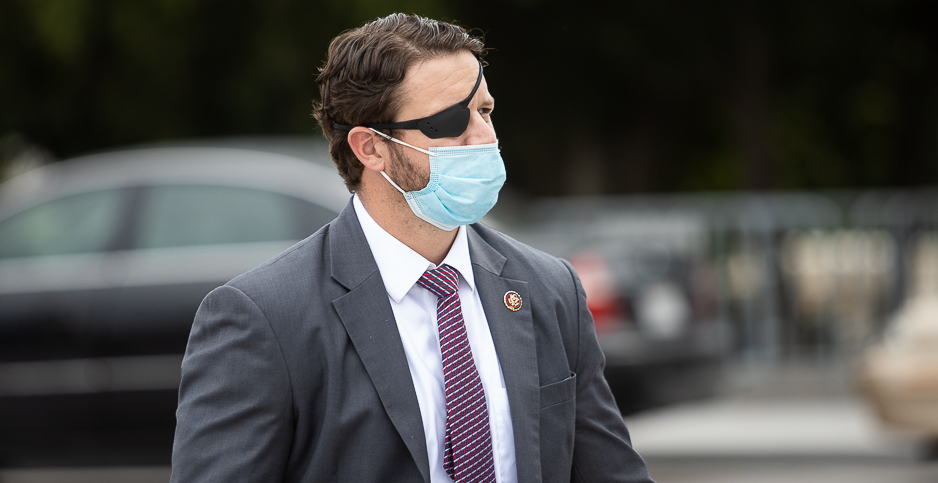 Rep. Dan Crenshaw of Texas is one of numerous Republicans taking advantage of the revamped earmarking process. Francis Chung/E&E News

House Republicans aren’t eager to talk about climate change, but they are happy to request earmarks to protect their districts from its impacts.

Nearly all of the earmarks in the House’s fiscal 2022 Homeland Security spending bill are for guarding against the impacts of the changing climate — with nearly a third of those going to Republican lawmakers.

The maneuvering is the latest example of how Republicans are trying to respond to a climate crisis increasingly hitting their districts without calling for robust federal intervention.

Such actions allow them to address local concerns about increasing vulnerabilities without risk of alienating the party’s traditional allies in the fossil fuel industry by backing other federal intervention.

The House spending bill, approved by the full committee earlier this week, contains 73 earmarks worth $149.4 million, with the bulk — $127 million — going for Federal Emergency Management Agency pre-disaster mitigation projects and most of the rest for standing up emergency operations centers in local communities.

All but one of the 73 projects have a direct or indirect link to extreme weather, rising sea levels, drought conditions, wildfires or other natural disasters that scientific consensus ties to climate change.

Rep. Lucille Roybal-Allard (D-Calif.), the chair of the House Homeland Security Appropriations Subcommittee, said many of the pre-disaster mitigation earmarks were based on past patterns of national disasters, including hurricanes, as well as forecasts for those emergencies to come, such as a severe wildfire season in the West due to the ongoing drought.

Roybal-Allard said the earmarks were not meant specifically to send a message on climate, but she said it is notable that many Republicans are requesting the dollars for pre-disaster mitigation.

Republicans “won’t attribute any of it to climate change, but if you look at what they’re requesting there is a clear indication on their side — call it what you want — that something is happening” with the climate, she said.

Rep. Dan Crenshaw (R-Texas), an Energy and Commerce Committee member who has pressed his party to move away from climate science denial to focusing on clean energy, received the most earmarks in the bill of any member.

He won $18.2 million for two flood control projects in his Houston district, which has seen record rainfall from storms over the past half-decade.

When asked about his requests, Crenshaw said they were based on immediate “mitigation needs” and said it was not due to concerns about extreme weather patterns.

“When it comes to flooding, it is primarily because of bad standards for development and bad infrastructure. It’s not really anything to do with increased rainfall … so I can’t even make the argument that it’s because of climate change,” he said.

He offered no specific rationale in his request for the creation of the center, although the parish experienced severe flooding as recently as this spring from a hurricane.

House Democrats, however, were quicker to link mitigation earmarks they’d won in the bill to climate change.

Kilmer said the focus on pre-mitigation grants in the bill reflects “a growing recognition” of the impacts of climate change regardless of party. “There are blue districts and red districts and purple districts that are seeing these impacts,” he said.

Many of the other Democratic FEMA grant earmarks are tied to actions that would shore up infrastructure amid a changing climate.

Rep. Joe Neguse (D-Colo.) received $525,000 to expand exit routes from a subdivision in his district that faces wildfire threats.

While Republicans got several wins on climate-linked earmarks in the Homeland Security bill, an even larger GOP request linked to the environment looms on the Energy-Water spending bill due out July 11.

Rep. Brian Mast (R-Fla.) has requested the single largest earmark of the more than 2,800 proposed for spending bills in fiscal 2022. He wants $725 million to help complete work on the much-delayed, multibillion-dollar Florida Everglades restoration project that has been plagued by setbacks over two decades.

“The federal government has historically been woefully behind the state dollars that were put into it,” said Mast. “So, part of [the request] is just the catch-up and part of it is getting the project to completion.”

Biden is seeking $350 million in fiscal 2022 for the project, which is viewed as vital to sustaining South Florida’s ecosystem and water supply.

But Rep. Marcy Kaptur (D-Ohio), the chair of the Energy and Water Development Appropriations Subcommittee, said her panel has been “very, very, very generous” to the Everglades project over the years. She said there are plenty of other water projects with needs too — from the Great Lakes to the coasts to the Mississippi River.