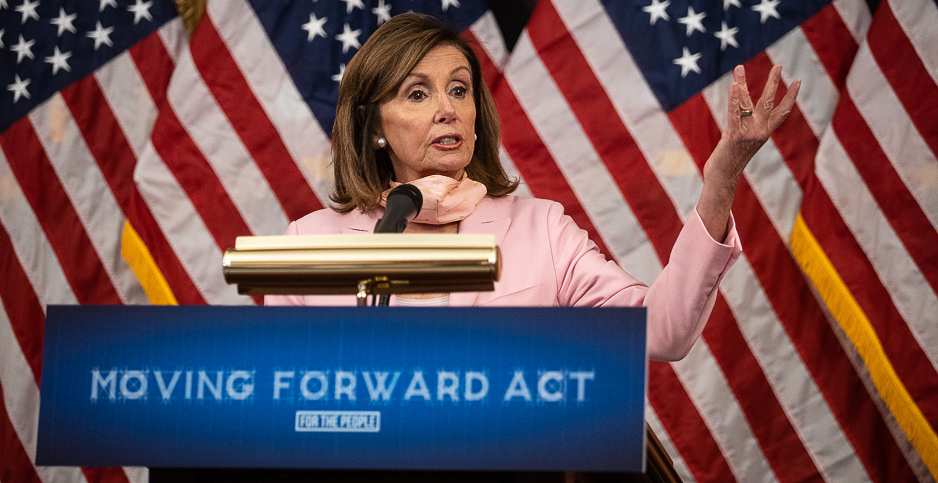 The House returns to full legislative session this week as it looks to build support for broad infrastructure and pandemic stimulus legislation.

Lawmakers on both sides of the Capitol will also be debating policing legislation and looking to make headway on fiscal 2021 spending.

The infrastructure package, up for debate next week, includes recommendations from a forthcoming House Select Committee on the Climate Crisis report.

Speaker Nancy Pelosi (D-Calif.) and several committee leaders touted the legislation at a news conference last week, saying it would help stimulate the economy in the wake of the coronavirus pandemic (E&E News PM, June 18).

The plan, dubbed the "Moving Forward Act," would invest more than $300 billion in roads and bridges, $75 billion in clean energy, $40 billion in wastewater, and $25 billion in drinking water, according to a fact sheet provided by Pelosi’s office.

Its central component is a $494 billion highway reauthorization bill passed by the Transportation and Infrastructure Committee last week after a marathon markup (Greenwire, June 19).

House Majority Leader Steny Hoyer (D-Md.) has scheduled three days of floor debate on the package — from June 30 to July 2 — before members leave for the July Fourth break.

While the T&I Committee has already completed work on the surface transportation provisions, other panels still have to produce their portions of the package.

The Energy and Commerce Committee has jurisdiction over the clean energy provisions, which are expected to mirror those in the "Leading Infrastructure for Tomorrow’s America Act," H.R. 2741.

The Ways and Means Committee will handle tax incentives for clean energy, which are expected to resemble those in the "Growing Renewable Energy and Efficiency Now Act," the sweeping green energy bill that the panel unveiled last fall.

And the Oversight and Reform Committee will take the lead on provisions that would provide $10 billion for the U.S. Postal Service to replace its aging fleet of gas-powered delivery vehicles with electric vehicles.

The Trump administration reportedly remains keen on the $1 trillion infrastructure plan that was floated in the president’s fiscal 2021 budget request to Congress.

A major component of the plan would be an $810 billion, 10-year reauthorization of surface transportation programs, according to a fact sheet provided by the White House at the time (Greenwire, Feb. 10).

Joel Szabat, President Trump’s nominee for undersecretary of Transportation for policy, testified before the Senate Commerce, Science and Transportation Committee last week that more details could be released soon.

"The release of the President’s budget on February 10th previewed the Administration’s upcoming Surface Transportation Reauthorization proposal," Szabat said in his prepared testimony.

In the Senate, Environment and Public Works Chairman John Barrasso (R-Wyo.) has pushed for merging his committee’s highway, drinking water and water projects bills into an infrastructure offering (Greenwire, May 6).

The path for getting infrastructure legislation into law remains uncertain. While the House package has drinking water and wastewater provisions — including cleanups of per- and polyfluoroalkyl substances, or PFAS — Transportation and Infrastructure Chairman Peter DeFazio (D-Ore.) will release a water projects bill separately.

Some lawmakers have discussed lumping infrastructure legislation into a future coronavirus stimulus package, but the Senate remains reluctant on that front.

"I would ask my colleagues, we need to redouble our efforts on this to advance this bill," she said. "We need to unlock this energy bill."

Beyond infrastructure, action on the climate and environment this Congress may happen in the spending process.

The Senate Appropriations Committee had expected to begin marking up its fiscal 2021 spending bills this week, but the work has been delayed without an agreement to limit amendments.

"The Democrats want to offer a lot of controversial things" as amendments, said Appropriations Chairman Richard Shelby (R-Ala.) late last week. "We are not going to move any bills that would just create a circus."

Shelby noted that in recent years Republican and Democratic appropriators have had success in advancing spending bills by limiting controversial amendments in committee.

But in an election year with control of the Senate in play, neither side may be willing to hold its fire on a chance to highlight its priorities.

Sen. Patrick Leahy of Vermont, the chamber’s top Democratic appropriator, said Democrats are pushing not "poison pill riders" but rather amendments that would increase money for pandemic aid. He noted the GOP still has the Senate majority and added, "If they don’t like them, they can vote them down."

Shelby said the impasse could leave agencies operating under level fiscal 2020 funding for a while.

"We could wind up with a [continuing resolution] at the end of the year," said Shelby, referring to a stopgap funding measure Congress would need to move if it can’t enact fresh spending bills before the new fiscal year begins Oct. 1 to avert a government shutdown.

The House announced plans last week for moving all of its 12 spending bills in July (Greenwire, June 19).

The full House Appropriations Committee will hold a hearing tomorrow to hear from lawmakers on their priorities.

Lawmakers in both chambers will also focus on policing reforms in the wake of the death of George Floyd and other Black Americans by police and widespread calls for racial justice.

The House will consider potentially landmark legislation, while the Senate pushed back consideration of the annual defense bill by at least a few weeks to consider its own law enforcement reforms.

One difference between the two proposals is that under the House bill, the "Justice in Policing Act," U.S. Park Police officers would be required to wear body cameras. The current Senate plan, the "Just and Unifying Solutions to Invigorate Communities Everywhere Act," does not contain that requirement.

Park Police officers have come under criticism after using force to disperse a crowd of protesters near the White House on the evening of June 1.

Their bill came in response to the killing of Bijan Ghaisar, 25, who was shot by two Park Police officers after he fled a car crash in Virginia in 2017. Ghaisar was unarmed when he was pulled over on the George Washington Memorial Parkway.

The House is expected to pass its policing bill by the end of the week; the Senate will begin debating its version, but there is no guarantee it will have the 60 votes needed to advance.

Senate Majority Leader Mitch McConnell (R-Ky.) said last week of Democrats, "If they want to make a law and not just try to make a point, I hope they’ll join us in getting on the bill."

Minority Leader Chuck Schumer (D-N.Y.) said, "The Republican bill has a long way to go to meet this moment."

But before policing, the Senate will vote on Cory Wilson to sit on the 5th U.S. Circuit Court of Appeals.

schedule: The House Appropriations hearing is Tuesday, June 23, at 11 a.m. via webcast.