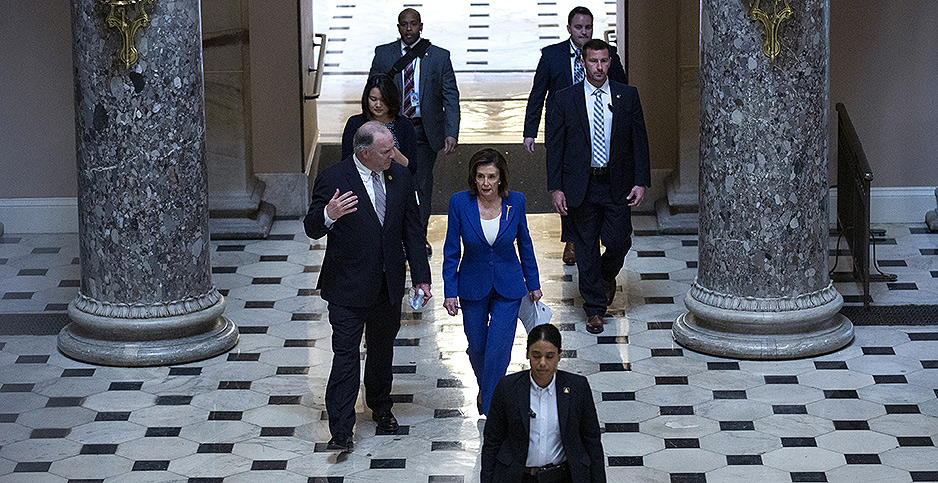 The House this afternoon passed by voice vote a $2.2 trillion package to fight the novel coronavirus after lawmakers raced to the Capitol to beat back a threat from a lone member to slow the pandemic aid.

The House gave strong bipartisan backing after the Senate approved the deal by a unanimous vote earlier this week (E&E Daily, March 26). President Trump has praised the bill and said he would sign it into law.

House leaders had hoped to not force many lawmakers to return from home, but those plans shifted yesterday when conservative Rep. Thomas Massie (R-Ky.) raised concerns about moving such a large bill without a roll call.

As a result, lawmakers were told they should try to return to overcome procedural objections and allow for a possible roll-call vote so the aid would not be delayed through the weekend.

"Right now, millions of essential, working-class Americans are still required to go to work during this pandemic," Massie tweeted this morning, confirming his opposition to moving the bill without a roll call. "Is it too much to ask that the House do its job, just like the Senate did?"

Overnight, lawmakers in a remarkable show of bipartisan unity scrambled to return to Washington as the nation struggled to respond to the deepening public health crisis.

Members from both parties tweeted out photos of traveling on empty planes and told of struggling to get limited flights on short notice, and some drove themselves several hours to back the bill.

After debate, House Speaker Nancy Pelosi (D-Calif.) called members to the chamber to overcome Massie’s request for a voice vote. "It is very important you come now," she said just before 1 p.m.

Members used the galleries to avoid large congregations on the floor and also avoided packing elevators and stairwells. The Speaker’s Lobby behind the chamber was closed to the press.

At the Capitol, members limited their time on the floor at one time and avoided packing elevators and stairwells. The Speaker’s Lobby behind the chamber was closed to the press.

The legislation would provide hundreds of billions of dollars to businesses hurt by the crisis and $340 billion to federal agencies to combat the virus. It does not set any environmental requirements for companies receiving the aid, as some greens had pushed.

Massie, a self-styled libertarian, is drawing flack on social media from Trump and members of both parties for threatening to force a roll-call vote on the Senate stimulus.

Trump called Massie a "a third rate Grandstander" on Twitter this morning. "He just wants the publicity. He can’t stop it, only delay, which is both dangerous & costly." The president later added: "throw Massie out of Republican Party!"

"Breaking news: Congressman Massie has tested positive for being an asshole," the former Massachusetts senator and secretary of State tweeted this morning. "He must be quarantined to prevent the spread of his massive stupidity."

Kerry and Massie memorably clashed at a House hearing last year, where the former secretary of State was called to testify on the impact of climate change on national security (Greenwire, April 9, 2019).

"Are you serious?" Kerry replied to laughs in the hearing room amid Massie’s questioning.

Rep. Peter King (R-N.Y.) unloaded on Massie as he traveled back to Washington to vote this morning.

"Because of one Member of Congress refusing to allow emergency action entire Congress must be called back to vote in House," King tweeted. "Risk of infection and risk of legislation being delayed. Disgraceful. Irresponsible."

Highlighting the growing health risks of today’s vote, Rep. Lizzie Fletcher (D-Texas) announced last night that she will remain home in Texas as she awaits test results she sought after experiencing COVID-19 symptoms.

Despite the strong bipartisan support for the legislation, lawmakers took shots at each other over some provisions and recent negotiations.

House Transportation and Infrastructure Chairman Peter DeFazio (D-Ore.) said, "The Democrats, we fought back. It’s going to be workers, workers and families first."

Numerous lawmakers have spoken about another stimulus bill, but leaders don’t seem to be in agreement about what’s next (E&E Daily, March 27).

Neal said, "There will be a phase 4, which will be real stimulus."