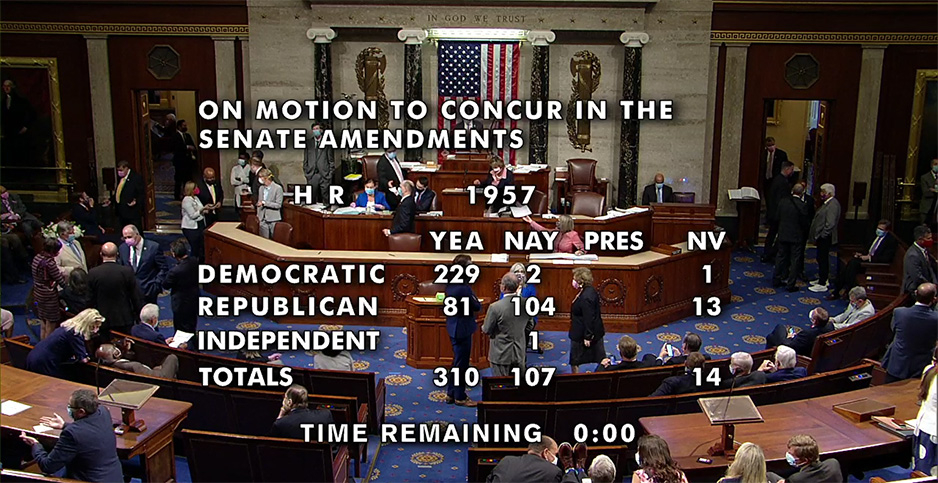 The House’s 310-107 passage of the "Great American Outdoors Act" came nearly a month after the Senate advanced its version, 73-25.

"The goal of the bill is positive, but how it’s achieved is just flat wrong," said Rep. Cedric Richmond (D-La.), who was one of just two Democrats to vote against the bill along with a group of other House members whose states would be affected — including fellow Louisianan Rep. Steve Scalise, the Republican whip (E&E Daily, July 16).

Dingell’s husband, the late John Dingell, helped create the LWCF and was the namesake of 2019 legislation reauthorizing the program permanently — recognition of his lifelong work on the issue. He and Young were friends who enjoyed hunting and fishing together and collaborated on legislation in the 1990s viewed as a precursor to the "Great American Outdoors Act."

Inevitably, the circumstances of the bill’s passage could not fully escape the politics of the moment.

During her floor remarks, she singled out "the energy and expertise of our freshmen" for leading the House effort to pass the lands package, mentioning Rep. Joe Cunningham (D-S.C.) by name. The freshmen co-sponsors of the "Great American Outdoors Act" are among this year’s most vulnerable Democratic incumbents, with Cunningham a special target for Republicans (Greenwire, June 4).

"Special interest groups have been putting pressure on you and been giving you misinformation," Bishop told his colleagues, explaining that the bill was just an excuse to expand the federal government’s land-buying authority.

"’Quick, there’s a global pandemic, let’s spend billions of dollars repairing fences, putting up new signs, fixing toilets at our wildlife refuges, parks and forests,’ said no one ever," deadpanned Rep. Garret Graves (R-La.), who with Richmond led an effort to remove the revenue-sharing cap for Gulf states.

Rep. Paul Gosar (R-Ariz.), chairman of the Congressional Western Caucus, called the bill "a demonstration of everything wrong with Washington … written not by committees but in backrooms, packed full of special interest provision and now being forced through without the opportunity for us to amend it."

"Today, I didn’t think it was necessary to engage in the same argument we’ve been engaging in about the LWCF and the backlog," Grijalva said in his concluding remarks. "This legislation is not about robbing Peter to pay Paul. It is not about taking money from the East to give to the West. It is not about denying coastal states their share.

"The process of this legislation reaching this point … has been difficult. It has been frustrating," he said. "And yet the possibility of it being done was always there."