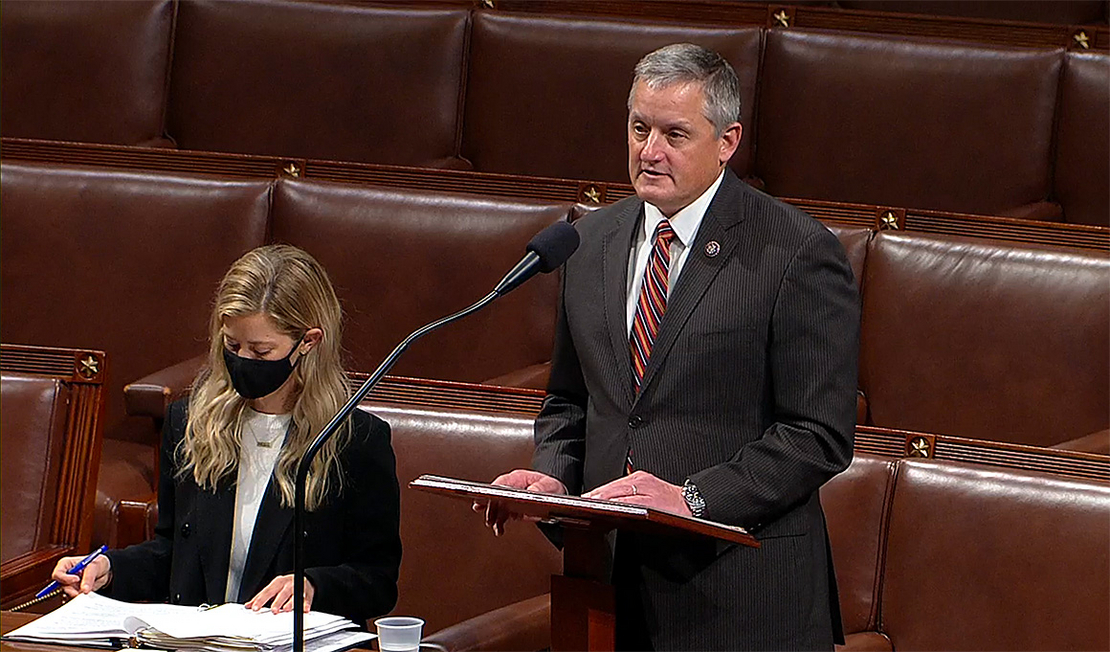 In total, the House will consider 261 amendmentsto the package. A final vote on the bill is anticipated by the end of this week.

Among the most repeated complaints from Republicans within those amendments is $8 billion over two years for the United Nations’ Green Climate Fund.

Republicans will have the opportunity to debate eight amendments directly tied to stripping from the bill money for the U.N.-backed resilience program, an effort to help developing countries with climate change. Another three amendments would alter funding for other U.N. climate programs.

“I think what was essentially happening here is that the progressives amongst their base have been telling the Democrat leadership that they don’t want to focus on China or being tough with China because it might jeopardize the most sacred thing of all — and that’s climate change,” said Rep. Steve Chabot (R-Ohio), who serves as ranking member on the Foreign Affairs Subcommittee on Asia, the Pacific, Central Asia and Nonproliferation during the Rules Committee hearing.

The bill has origins in a pair of bipartisan research reauthorization proposals from the House Science, Space and Technology Committee, both of which advanced last year. House Republican lawmakers have turned against the bill despite backing some proposals that moved out of committee.

Republican leaders urged members to vote against the bill yesterday. House Minority Whip Steve Scalise (R-La.) said on Newsmax that the bill was “a gift to China.”

The climate provisions contained in the overall package have been among the main criticisms lobbed at the bill from House Republicans, among trade enforcement and other foreign policy complaints.

“If you look through this bill, it mentions climate change twice as often as it mentions national security,” said Natural Resources ranking member Bruce Westerman (R-Ark.). “It mentions coral reefs 394 times, more often than it mentions China at 374 times.”

That lack of China criticism extended to the White House endorsement of the bill, Republicans said.

In a statement of administration policy, the White House said it supports the bill’s “steps to strengthen our economic competitiveness, supply chain resilience, equity and inclusivity, and leadership in science and technology.”

The statement does not mention China. But that may be the point, Democrats said.

“It doesn’t have to specifically mention China,” said Rep. Earl Perlmutter (D-Colo.). “We are competing against the rest of the world, not just China.”

Central to that effort is some $125 billion in spending authorization for research and development activities across the Department of Energy’s Office of Science and the National Science Foundation.

“It is abundantly clear that if America is to meet the challenges that it is facing, we are going to need to preserve and strengthen our national capacity for innovation,” said Science Chair Eddie Bernice Johnson (D-Texas).

Amendments made in order

Of the 261 amendments made in order, the Rules Committee gave the go-ahead for a series of Democratic proposals that would strengthen the climate and clean energy credentials of the bill.

Those amendments include a proposal from Rep. Alexandria Ocasio-Cortez (D-N.Y.) that would boost the spending for the Green Climate Fund to $5.5 billion annually, a stark contrast to Republican complaints about international climate spending.

Line 5 and other fossil fuel amendments

Democrats blocked a proposed amendment from Rep. Tim Walberg (R-Mich.) that would have prevented the administration from revoking a permit for a cross-border pipeline that had been previously approved.

The amendment is part of Republicans’ concern that the Biden administration may side with the state of Michigan in the Line 5 pipeline fight that would halt the flow of fossil fuels through the decades-old pipeline infrastructure that crosses through the Great Lakes.

“This amendment is simple,” said Rules ranking member Tom Cole (R-Okla.). “It ensures that the promises made by the American people are promises kept by preventing the president from unilaterally backing out of previous cross-border energy agreements.”

Other Republican amendments of note that made the package include: