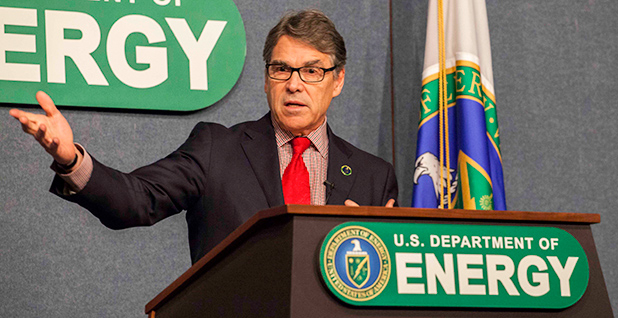 The House Intelligence, Foreign Affairs, and Oversight and Reform committees sent a letter yesterday to the former New York City mayor requesting a slew of documents related to its ongoing investigation of whether Trump sought to pressure Ukraine to investigate Hunter Biden, the son of his Democratic rival former Vice President Joe Biden who sat on the board of a Ukrainian natural gas company.

"A growing public record indicates that the President, his agent Rudy Giuliani, and others appear to have pressed the Ukrainian government to pursue two politically-motivated investigations," House Intelligence Chairman Adam Schiff (D-Calif.), Foreign Affairs Chairman Eliot Engel (D-N.Y.), and Oversight and Reform Chairman Elijah Cummings (D-Md.) wrote to Giuliani in issuing the subpoena. "The committees have reason to believe that you have information and documents relevant to these matters."

The communications and documents sought about Perry are related to his only known link to the investigation — his trip to the inauguration of Ukrainian President Volodymyr Zelenskiy in May. The Energy secretary was a last-minute substitute for Vice President Mike Pence.

At Zelenskiy’s inauguration, Perry said "had we had a little bit more of a head start, if we had known a few more days, we would have probably had five times a larger delegation. Because the people of the United States stand with the people of Ukraine," according to a transcript posted on the U.S. Embassy of Ukraine website.

The vice president had been ordered to cancel his planned trip because Trump first wanted to see how the new Ukrainian president "chose to act" in investigating the Bidens before establishing top-level ties, according to the whistleblower complaint filed last week that sparked the impeachment inquiry.

The chairmen gave Giuliani until Oct. 15 to respond; they warned that failing to do so could be used as evidence of the administration obstructing the impeachment inquiry.

Perry was not subpoenaed. The Energy Department did not respond to a request for comment.

While attending the inaugural in Ukraine, Perry also announced that Trump would sign legislation to sanction the Nord Stream 2 pipeline, a project backed by Russian oil and gas giant Gazprom that would carry Russian natural gas across the Baltic Sea to Germany.

It was the first sign the administration signaled that Trump would support sanctions on Nord Stream 2, which critics say would empower Russian President Vladimir Putin by making Ukraine and other European nations more dependent on Russian energy.

Legislation targeting the vessels that would help construct the pipeline has since passed key House and Senate committees.

Supporters of the legislation have dismissed any connection between the announcement and Trump’s alleged courting of the Ukrainian president, nor is it specifically cited in the whistleblower complaint (E&E Daily, Sept. 27).

Beyond Perry, the committee is seeking any documents related to 45 Energy Group, a Houston-based energy firm that bills itself as a leader in "geopolitical energy and communications." Its website lists its CEO as Healy Baumgardner, a former Trump campaign aide and spokesperson who also has worked as an energy lobbyist and conservative commentator.

The firm’s website links to a March CNBC interview with Perry and Secretary of State Mike Pompeo, where both promoted U.S. energy interests and warned against European reliance on Russian energy and building the Nord Stream 2 pipeline.

Baumgardner was tied to an alleged effort last year by a member of former EPA Administrator Scott Pruitt’s press team to leak negative stories about then-Interior Secretary Ryan Zinke to divert attention from his own ethical woes, The Atlantic reported at the time.

Baumgardner did not immediately respond to a request for comment. EPA has denied those claims.