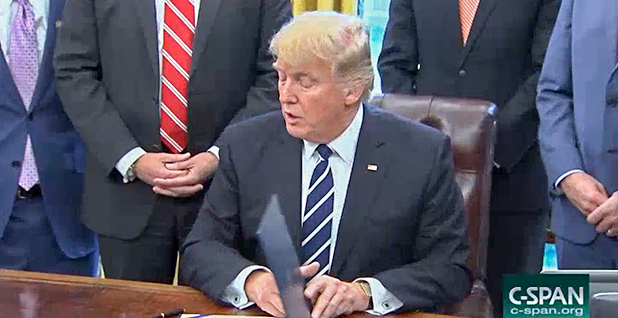 The full House will likely consider H.J. Res. 69 tomorrow. It’s one of the latest efforts by congressional Republicans to roll back Obama administration regulations through the 1996 Congressional Review Act.

Young, who testified during the Rules hearing, said the regulation was "a classic example" of federal overreach by the previous administration.

"We have to recognize that this isn’t about the little polar bears, little grizzly bears and wolves," Young said, but about "the state’s right to manage" its fish and game to a "sustainable yield."

In a tense exchange, Young called Polis’ characterization "the biggest bunch of bull poop I ever heard." Young said the Obama rule was part of an overall "creep of bureaucratic rulemaking" that he’d witnessed over his congressional career.

When finalizing the rule in September, the Fish and Wildlife Service said its purpose was "to clarify that predator control is not allowed on national wildlife refuges in the state unless based on sound science and in response to a conservation concern or is necessary to meet refuge purposes, federal laws or service policy.

"In addition, the rule defines the process that will be used for considering predator control, prohibits certain methods and means for non-subsistence harvest of predators, and updates the procedures for closing an area or restricting an activity on refuges in Alaska," FWS said.

At the time, then-FWS Director Dan Ashe said: "Whenever possible, we prefer to defer to the state of Alaska on regulation of general hunting and trapping of wildlife on national wildlife refuges unless by doing so we are out of compliance with federal law and policy. This regulation ensures we comply with our mandates and obligations."

Several environmental protection and animal welfare groups opposed H.J. Res. 69 in a letter to lawmakers yesterday, urging them to vote against it.

"Voiding this vital rule would undermine federal authority to manage wildlife on more than 76 million acres of public lands congressionally reserved for wildlife conservation," they wrote.

"It would impair science-based stewardship of natural resources, limit FWS’s ability to sustainably manage wolves, bears, and other native carnivores, and upset the natural ecological balance on these wild lands that belong to all Americans."

Young’s resolution is one of several pending in the House and Senate targeting Obama-era rules.

The House has passed measures against the Bureau of Land Management’s so-called Planning 2.0 regulation and the agency’s venting and flaring standards to reduce methane emissions (E&E Daily, Feb. 8). Both are awaiting Senate action.

Senate Energy and Natural Resources Chairwoman Lisa Murkowski (R-Alaska), who supports the resolutions, said some of her GOP colleagues are still learning about the impact of the venting and flaring rule.

"It’s an issue that is pertinent in certain areas so you have lawmakers in certain regions that are more familiar with it, so I think our task is to make sure that everybody understands it," she said, adding that leaders are still "counting noses" in support of blocking the rule.

"You’ve got to keep it in context here," she said, noting that before this year, only one CRA resolution had ever succeeded.

"So we’ve gotten two moved through both bodies to the president and so we’re doing pretty good considering our track record," she said. "Do I want more? Yes."

Clarification: An earlier version of this story mischaracterized another Young resolution related to Arctic drilling, which would undo a safety rule and not President Obama’s withdrawal.