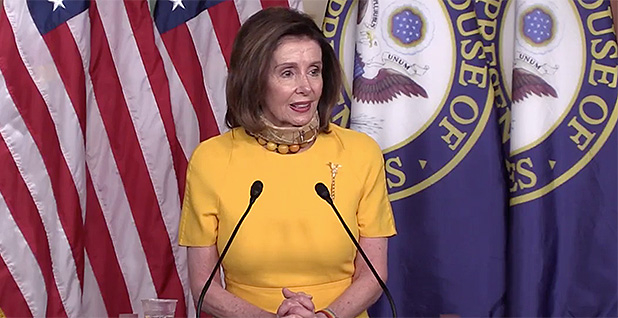 The House plans to test the waters next week on the historic but temporary rules change that will allow members to cast their votes remotely during the COVID-19 pandemic.

Just days after passing the resolution authorizing remote voting in committees and on the floor, Speaker Nancy Pelosi (D-Calif.) yesterday notified members that the sergeant at arms had declared an ongoing public health emergency (E&E Daily, May 18).

The chamber plans to vote on bipartisan legislation that would relax business restrictions on the Paycheck Protection Program, the popular small-business lending program enacted in late March as part of a COVID-19 stimulus.

Pelosi rejected calls from GOP leaders and the White House, who want to hit pause on more stimulus until the economic impacts of the bipartisan Coronavirus Aid, Relief and Economic Security (CARES) Act are known.

"Diversity and inclusion in the marijuana industry wasn’t going to study itself," he cracked on the Senate floor. "That had to be an A-1 priority during this crisis."

Despite the GOP leadership’s reluctance on new stimulus talks, a flurry of recent bipartisan COVID-19 proposals signal an acknowledgement by members of both parties that more legislation is coming.

There were also signs of progress on a key sticking point — Democrats’ demands for additional funds for state and local governments.

Sens. Bill Cassidy (R-La.) and Bob Menendez (D-N.J.) took to the floor yesterday to highlight their bill that would provide $500 billion in emergency funds to localities based on need.

Cassidy said the pair had worked to address concerns that such funds would be diverted to non-pandemic purposes — a suspicion shared by many in the Senate GOP caucus.

"We’ve worked through a lot of issues to find a bill that meets a valid public purpose that can pass on a bipartisan basis in both chambers," Cassidy said during a floor colloquy with Menendez.

"This is about helping cities and states maintain and preserve essential services, such as police, fire and education, for the reopening of our economy," he said.

Separately, 79 House Democrats called on their leaders yesterday to include $125 billion in a "restoration and resilience jobs" title in future COVID-19 stimulus.

Those funds would be dedicated to rebuilding outdoor infrastructure; bolstering climate resiliency from wildfires, hurricanes and flooding hazards; and restoring wildlife habitat.

"Such a title could create as many as three million near-term jobs — in many places where unemployment is surging — by investing in the restoration and resilience of our natural resources and recreational infrastructure," wrote the lawmakers, led by Natural Resources Chairman Raúl Grijalva (D-Ariz.) and Reps. Debbie Dingell (D-Mich.) and Jared Huffman (D-Calif.).

"Much of this restoration and resilience work could be implemented by employing millions of young Americans through a 21st Century Civilian Conservation Corps, which would simultaneously accelerate our economic recovery, strengthen our workforce, bolster our resilience, sequester carbon, and enhance our nation’s remarkable natural resilience."

While infrastructure legislation remains a Beltway punchline, it’s an area of bipartisan agreement and topic of discussion.

The Democrats earlier this year released a framework for infrastructure efforts, and the Transportation and Infrastructure Committee is poised to release water projects legislation. The Senate Environment and Public Works Committee has approved both its water and highway bills (E&E Daily, May 18).

On a conference call yesterday organized by the World Resources Institute, several former Obama administration officials called for Congress to include infrastructure and clean energy in a future stimulus package.

Joe Aldy, the former special assistant to President Obama for energy and environment, said lawmakers should study the lessons of the American Recovery and Reinvestment Act of 2009, which provided roughly $90 billion for clean energy.

"We can learn what works and build on it," said Aldy, who is now a professor at Harvard University’s John F. Kennedy School of Government.

"Importantly, stimulus money can help push out new technologies in the short run, but long-term policy signals can help pull these technologies out further over time," he added.

Sue Tierney, a senior adviser at the Analysis Group and former assistant secretary for policy at the Department of Energy, said a green-tinged infrastructure stimulus would help create "shovel-ready" projects and "high-quality" jobs.

Dan Lashof, U.S. director of the World Resources Institute, agreed that it would help create well-paying jobs in the clean energy sector, including jobs building batteries for electric transit and school buses.

Cathy Zoi, CEO of EVgo and former assistant secretary for energy efficiency and renewable energy at DOE, added that lawmakers should seek to expand the nation’s network of electric vehicle charging stations.

"To fully electrify transportation, we need to be able to charge at home, at work and on the go," she said. "And that’s the area where I think that there’s a really interesting opportunity for an infrastructure-oriented stimulus bill to have a role there."