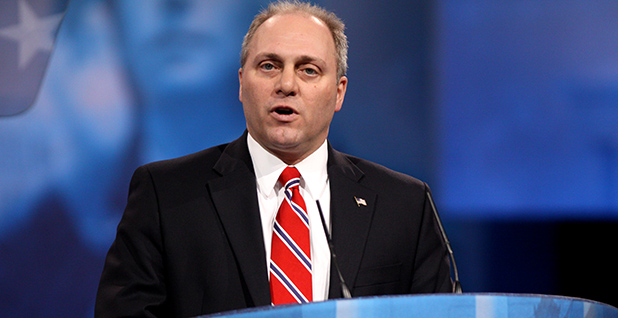 The House will vote this week on an anti-carbon-tax resolution, a perennial piece of legislation that this year will serve as a key test for the bipartisan Climate Solutions Caucus.

The resolution, from House Majority Whip Steve Scalise (R-La.) and Rep. David McKinley (R-W.Va.), would call a carbon tax "detrimental to the United States economy" and suggest that it could increase costs across the economy.

A spokeswoman said Scalise is "looking forward to a good vote," and Scalise said in a statement that the resolution "would yet again put Congress on record against a carbon tax."

It’s a version of a similar measure that passed the House in 2016, when no Republicans voted against it, including Rep. Carlos Curbelo of Florida, co-chairman of the Climate Solutions Caucus (E&E News PM, June 10, 2016).

This time around, the caucus will have 86 members — and 43 Republicans — likely enough to block the resolution. The vote is largely symbolic, but for critics of the caucus, it marks a crucial moment.

A vote in favor puts lawmakers on record as against what is widely seen by climate hawks as the best solution to global warming, vindication for detractors who see the caucus as a shelter for vulnerable Republicans looking to put a green notch on their belt.

"Absolutely, oh, hell yes," RL Miller, president of Climate Hawks Vote, said when asked whether she thinks it’s a make-or-break moment for the caucus. "This is ‘Please pass the popcorn!’"

Curbelo, for his part, suggested last week he wouldn’t vote for this year’s resolution.

"Protecting our environment and economic growth are not mutually exclusive," he said in a statement. "The resolution presents a false choice."

Meanwhile, the Citizens’ Climate Lobby, the group behind the caucus, has been lobbying against the measure. The group is hoping to get some sort of bipartisan carbon-fee-and-dividend legislation introduced in Congress, either in the coming months or in the next session.

The issue at the moment is not whether Republicans support a carbon tax; it’s that they’re potentially taking an option off the table, said CCL spokesman Steve Valk.

CCL issued a point-by-point rebuttal on its website when the legislation was introduced.

While energy prices would likely rise with a carbon tax, they could easily be offset by distributing the dividends to households, the group argues.

Still, the pressure will be on Republicans to vote for Scalise’s resolution, particularly in an election year.

Some oil and gas producers, such as Exxon Mobil Corp., have come out in favor of a carbon tax, but a wide variety of right-leaning groups still oppose it.

"Energy is the engine of progress," Chet Thompson, president of the group American Fuel & Petrochemical Manufacturers, said in a statement of support for the Scalise resolution. "Making it more expensive will hurt our economy and disproportionately impact middle- and low-income families who can least afford it."

A coalition of conservative and fossil fuel-backed groups also sent a letter last week to House leadership asking for a vote.

"A carbon tax is a policy with one definable goal: to raise the cost of traditional, reliable, affordable sources of energy," wrote the groups, which include the American Legislative Exchange Council, Competitive Enterprise Institute and Heartland Institute.

The resolution will hit the House Rules Committee tomorrow afternoon, when lawmakers are sure to engage in the first round of partisan squabble over the measure.

Leadership had been in talks behind closed doors last week about whether to bring it up for a vote, according to a source familiar with the discussions.

Miller, who is among the most vocal critics of the Climate Solutions Caucus and calls its Republicans the "climate peacocks," said she thinks it will be a test of Curbelo’s leadership.

"This is the time for the climate peacocks to show their true colors, whether they will flash their tails proudly in support of a carbon tax, or whether they are all squawk and no walk," she said.