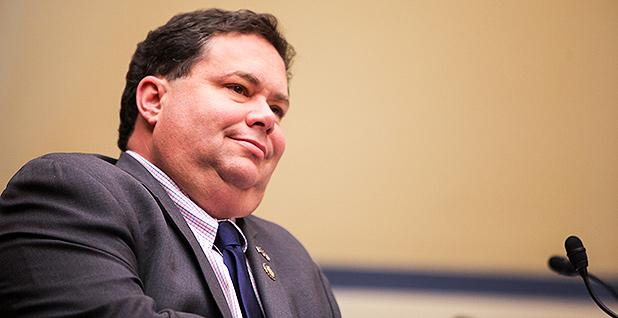 Farenthold thinks his days as a disc jockey (and later stint as a conservative talk radio host) helped prepare him for his career in politics. He eked out a narrow win over longtime Democratic Rep. Solomon Ortiz in 2010 to represent the state’s 27th District that stretches from the Corpus Christi area north along the Gulf Coast.

In addition to his days as a disc jockey, Farenthold has an intriguing backstory. His wealthy father was murdered when he was 11. He’s the step-grandson of a Texas liberal legend — Frances Tarlton "Sissy" Farenthold — who ran for governor of the Lone Star State and was the first chairperson of the National Women’s Political Caucus.

And Farenthold has been dogged by controversy in his political career. A photo of him posing at a fundraiser with a woman in lingerie has followed him since his campaign. And he was sued by a former staffer for sexual harassment, The Texas Tribune reported. That case was settled, and the terms of the agreement weren’t disclosed. Farenthold denied any wrongdoing.

It was. Texas is an energy state, and [energy is] really important as far as the economy of the state and the country. I think we’re looking at some big changes in the environmental area. … It fits with me. I know energy. I have a pretty good background in environment, but I’m going to have to get a little bit more up to speed on the Native American issues.

Ensuring that every American has the opportunity to enjoy our natural resources through reinvigorating the domestic energy industry, bringing down the cost of energy at home and at the pump, creating jobs utilizing the resources we already have and allowing people more access and a better experience at our public lands. … I see every opportunity in oversight as almost an Easter egg hunt for fighting waste, to save the government money and do things more efficiently.

The Oversight Committee was aggressive during the Obama years. Do you think it’ll be as aggressive under the Trump administration?

I do because oversight of executive branch agencies is not always about what’s going on at the top. It’s about the entrenched bureaucracies and practices that go on with career employees.

I do. The question is: How do you change the culture in the EPA? … I read a quote from Pruitt the other day that said it’s possible to grow jobs and protect the environment, they’re not mutually exclusive. I think if we could adjust the attitude with the EPA from being more adversarial to working with industry and state regulators, and quite frankly, local governments, we’re going to get more done.

The one in my backyard, the Padre Island National Seashore. I’m going to spend some time in August visiting a couple of the other national parks. It’s something my wife has wanted to do for a long time. We have a road trip we’re kicking around for this summer. We’re going to go out West, that’s the plan.

I started working at 15 years old working weekends at a radio station. God prepares you for things in ways you don’t understand. I had a radio career, I had a law career, I had a computer consulting career, then went back into radio. And radio taught me not to be afraid to get up in front of a microphone. Obviously, working as a lawyer taught me the importance of carefully crafting your statutes and how they can be misconstrued. And owning a computer company — I do a lot of technology stuff both on Oversight and Judiciary and the federal government basically can’t compute its way out of a paper bag. Understanding what can and should be done with technology has been a huge benefit. Then I went back into talk radio, which upped my name ID a lot and helped me get elected the first time out against a long-term incumbent.

What’s your favorite kind of music?

I’m still kind of a ’70s and ’80s pop guy, because it’s what I grew up with. But I also listen to a little bit of Texas country now.

I don’t watch much live TV anymore. I download stuff to my iPad and watch it on the iPad when I’m on the airplane. Right now I’m watching "The Magicians" on SyFy and "Madam Secretary." … "Magicians" is basically Hogwarts as a college.

We’ve got two dogs and a cat. The dogs love my wife, and the cat loves me. [The dogs are] maltipoos, little ones. Simba and Lulu. The cat is Nala, we were on a "Lion King" theme naming the pets for a while.

If you look at my Twitter feed, there are some pretty unflattering ones, but not officially, no. No nicknames for me. I guess my wife will occasionally — no — no nicknames I’m willing to share.