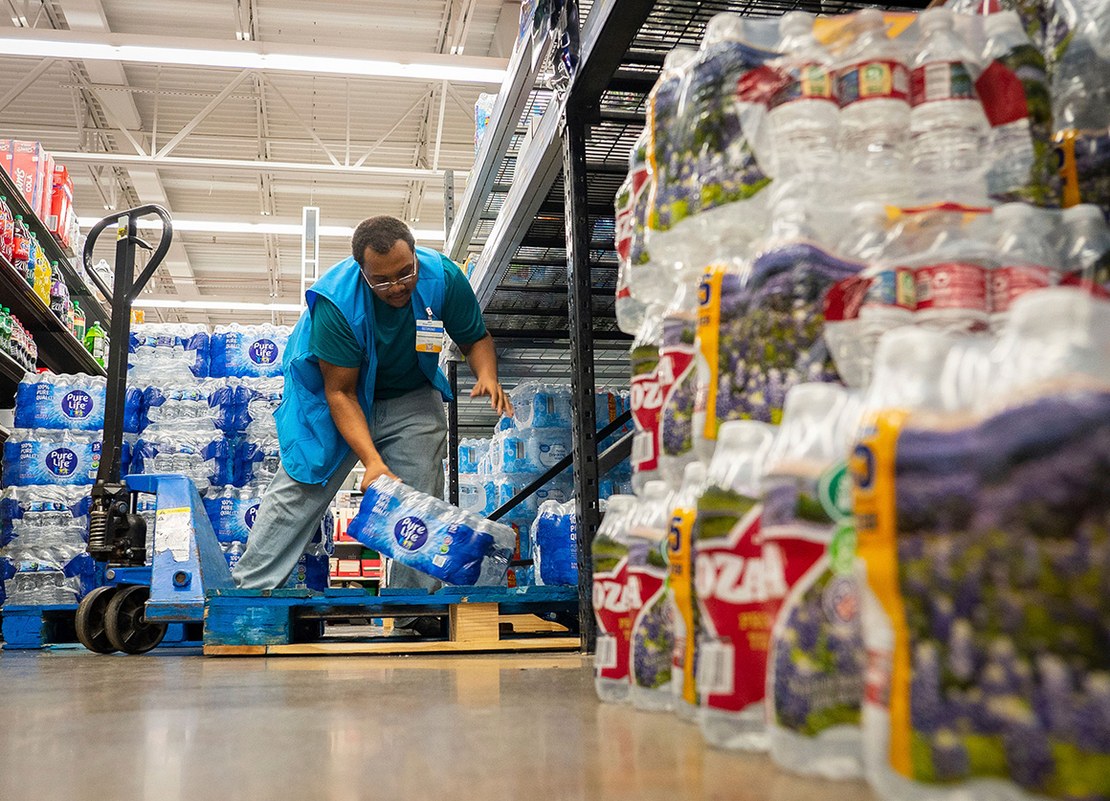 Water is stocked at a Walmart in Houston after a boil-water notice was issued for the entire city Sunday. Mark Mulligan/Houston Chronicle/AP Photos

The nation’s fourth-largest city — Houston — remains under a boil-water notice Monday after a power outage at the city’s water treatment plant triggered a drop in pressure that knocked out the delivery of safe drinking water for more than 2.2 million people.

Officials there are casting the order as precautionary, noting that pressure was immediately restored at the East Water Purification Plant after two transformers failed to deliver power and were quickly brought back online.

Even so, some are questioning why it took hours for a boil-water notice to be ordered and for the information to trickle out to residents preparing to head back to school and work Monday morning.

“I saw the notice at 7:30 a.m. on Twitter. … You would think that council members would have been made aware this was something that was happening,” Houston City Council Member Tiffany Thomas told E&E News in an interview.

The outage shines a bright light on vulnerabilities in the Southeast’s sprawling water systems and ties to the electric grid. Last year, a deep freeze across the South hamstrung the region’s grid and triggered boil-water notices and evacuations, and millions of Houston residents were placed under a boil-water notice due to a drop in water pressure (Greenwire, Feb. 18, 2021).

When asked about public anger and fear that the current boil-water notice has triggered, Houston Mayor Sylvester Turner, a Democrat, defended the city’s response at a press conference Monday and laid out a timeline of when three units at the East Water Purification Plant lost power as two transformers failed at the site beginning Sunday morning. The mayor said the current event marks the city’s third boil-water notice.

Turner said the crisis began at 10:30 a.m. Sunday, when two units inside the plant lost power and a third unit lost power 20 minutes later. By 11 a.m., Turner said, a plant electrician was on-site, but pressure at more than a dozen sensors dropped below the “emergency regulatory level” of 20 pounds per square inch. But the bulk of those sensors rebounded within two minutes, and power and water pressure were restored by 3:30 p.m. Sunday.

Officials later discovered that two transformers on-site, including a backup unit, went offline due to a ground trip and electrical overload, said Turner.

Throughout the day, officials reviewed sensor data and, in cooperation with the Texas Commission on Environmental Quality, decided to impose a boil-water notice at 6:44 p.m. Sunday. Based on lab results of water samples, Turner said, the boil-water notice could be lifted as soon as Monday night or Tuesday morning.

The mayor emphasized that a municipality under normal processes has 24 hours to issue a boil-water notice from an incident, and city officials saw no indication that contamination had occurred.

Carol Haddock, director of Houston Public Works, said at the press conference that the power outage prevented the plants from treating water and blocked them from pumping water into the transmission system. Haddock also confirmed that the system did not ask for 32 emergency backup generators to be turned on because the outage was inside the plant.

Following up on Haddock’s comment, Turner said he is asking why generators didn’t kick on and that he’s ordered Houston Public Works to conduct a diagnostic review to explain what happened and ensure it doesn’t happen again.

“I can understand people being angry … but what I can say to people is that this was a situation that was not being overlooked, ignored; teams were in, our electrician was in,” he said. “A decision was made out of an abundance of caution.”

‘I think the water is safe’

Houston Public Works’ boil-water order directs residents to boil water for three minutes as a precautionary measure before using it to drink, cook, bathe or brush their teeth, and noted that children, older adults and people with weakened immune systems are particularly vulnerable to harmful bacteria. People without power are being advised to use bottled water.

The city said it monitored water pressures across Houston on Sunday, and water pressure was restored to all customers shortly after the power outage.

Turner on Monday tweeted that although the city believes the water is safe, a boil-water notice was required after pressure dropped. He also said TCEQ has approved Houston Public Works’ plan to begin sampling water and that workers would begin collecting samples Monday for processing at a lab.

“We believe the water is safe but based on regulatory requirements when pressure drops below 20 psi we are obligated to issue a boil water notice. The City is submitting its plan to TCEQ for approval tonight,” the mayor tweeted.

“Water samples will subsequently follow and hopefully we will get the all clear from TCEQ. The City has to wait 24 hours from that point before the boil water notice is suspended. The earliest would be tomorrow night or very early Tuesday morning,” he continued.

Still, Thomas questioned why the city didn’t move more quickly to notify residents earlier given Monday is the first day of school districts resuming after the Thanksgiving holiday. The outage also comes as many people are concerned about high water bills, she added.

Thomas said the information should have gotten out earlier to ensure residents in the nation’s fourth-largest city were informed and not prone to panic. She said the city’s water plant doesn’t have a long-standing history of problems and couldn’t recall a boil-water notice during her three years on the council.

Overall, Thomas said she believes the city’s water is safe and hailed the state-mandated process of imposing a boil-water notice as critical to protecting neighborhoods in Houston that have seen disinvestment and environmental abuse, not to mention cancer clusters.

“I think the water is safe,” she said.