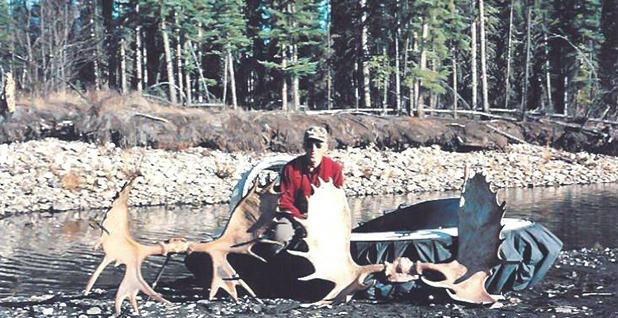 John Sturgeon worried he was jinxing himself when he fixed up the mothballed hovercraft in his garage without knowing whether the Supreme Court would let him pilot it to his favorite moose-hunting grounds in Alaska.

"But I actually put it in my garage, and I’ve been working on it all winter," he told E&E News this morning. He put a new engine in it last week.

The gamble paid off. The Supreme Court today ruled unanimously in favor of Sturgeon, the Alaska man at the center of a 12-year battle over hovercraft and federal regulations.

While some court watchers have dismissed the case as a novelty issue, the legal fight involves important debates on public lands, federalism and water rights that caught the Supreme Court’s attention on two separate occasions (Greenwire, Nov. 2, 2018).

In short, the justices ruled, the National Park Service does not have authority over every bit of land or water in park boundaries in Alaska.

The dispute began in 2007 when NPS ordered Sturgeon to stop using his hovercraft — a fan-powered vessel that zips over water — on the Nation River in Alaska’s Yukon-Charley Rivers National Preserve.

Sturgeon was within the preserve boundaries, but the key question for the court was whether the river was within NPS’s domain.

The answer depended on several legal considerations, including the interpretation of the Alaska National Interest Lands Conservation Act, or ANILCA, which treats Alaska public lands differently from those in the Lower 48.

The 9th U.S. Circuit Court of Appeals ruled against Sturgeon, but the Supreme Court reviewed the case in 2016 and ordered the 9th Circuit to take another look. The lower court again sided with NPS, this time on different grounds, and the justices again reviewed its ruling.

Today’s opinion, written by Justice Elena Kagan, concludes the Nation River is not a "public land," and the feds do not have title to the river, even if they have certain water rights there — so the river cannot be regulated by NPS as if it were part of the park system.

"’Alaska is different,’" the Court repeatedly emphasized, precisely because of ANILCA’s two purposes," he wrote today.

Dorsey & Whitney LLP attorney Tim Droske cautioned that the ruling leaves many questions unanswered about the scope of federal authority in the state.

"And while John Sturgeon’s victory is also important to the State of Alaska’s and Alaska Native Corporations’ ability to act free from federal regulatory interference, where exactly that line is to be drawn will need to be the subject of future litigation," he said in a statement.

Pacific Legal Foundation attorney Tony Francois, who has focused on the water rights issues in the case, said the ruling "clarifies and reinforces" precedent that limits rights to the "amounts necessary and uses necessary to protect federal interest."

It could, for example, regulate pollution into out-of-park rivers to protect against in-park impacts. NPS also has authority over waterways designated by Congress as Wild and Scenic Rivers, though the Nation River is not one.

The opinion called on Congress to clarify that those protections exist under ANILCA.

"In light of the explicit instructions throughout ANILCA that the Service must regulate and protect rivers in Alaska, I am convinced that Congress intended the Service to possess meaningful authority over those rivers," Sotomayor wrote. "If I am correct, Congress can and should clarify the broad scope of the Service’s authority over Alaska’s navigable waters."

University of Maryland environmental law professor Robert Percival said the park service could have a hard time meeting its duties to protect the Alaskan preserve without clarification.

"Today’s decision likely will complicate the Park Service’s efforts to fulfill its responsibility to protect the federal land on both sides of the Nation River," he said in an email. "Justice Sotomayor’s concurrence highlights this and suggests that Congress should step in."

Sturgeon, who was up early for a flight this morning, got word of the Supreme Court’s ruling around 6 a.m. Alaska time. He called the unanimous decision "unbelievable" and said he couldn’t wait to take his beloved hovercraft back on the Nation River for moose-hunting season.

He has already saved the date for his next trip: Sept. 5.