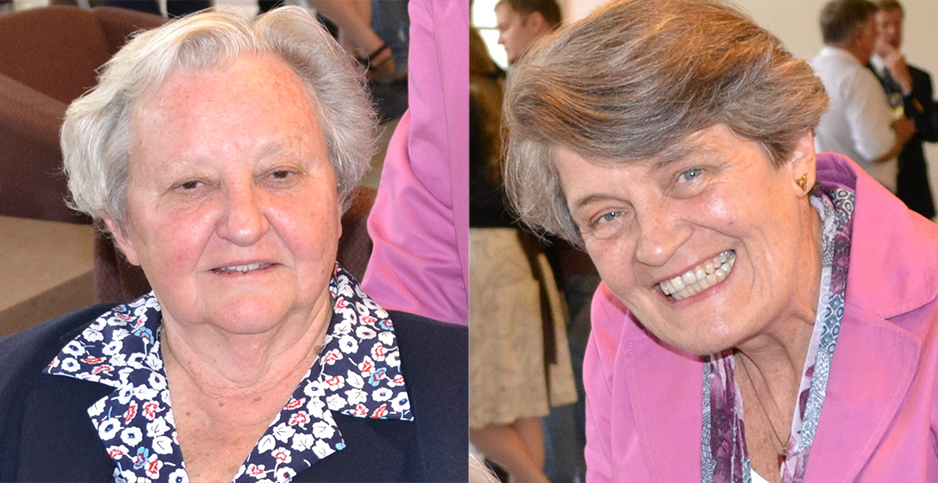 Sister Barbara Aires of the Sisters of Charity (left) and Sister Pat Daly of the Dominican Order have long pressed Southern Co. to reduce its greenhouse gas emissions. In 2010, the utility generated 70% of its electricity from coal; this year it dropped to 20%. Interfaith Center on Corporate Responsibility

In 2013 Luis Martinez, a lawyer with the Natural Resources Defense Council, was invited to an annual "stakeholders meeting" sponsored by Southern Co., then the owner of some of the biggest and dirtiest coal-burning utilities in the United States.

Martinez, new to his job dealing with energy issues in the Southeast, had heard about these meetings, but he was skeptical. Southern had spent most of the previous decade fighting efforts to deal with climate change in Washington and financing climate science doubters, such as Dr. Wei-Hock "Willie" Soon.

The NRDC lawyer’s typical reaction to companies like that was to "sue the bastards," but Martinez decided to go anyway, curious to see what Southern looked like up close. When he arrived at its Atlanta headquarters, he found the company’s top officials discussing remedies to climate change with about 40 representatives of religious and investor groups.

Leading the meeting were two Catholic nuns: Sister Barbara Aires of the Sisters of Charity and Sister Pat Daly of the Dominican Order. Both came from convents in New Jersey, and both spent a lot of time pushing Tom Fanning, Southern’s recently appointed chairman and CEO.

When Fanning showed interest in specific ways to reduce Southern’s greenhouse gas emissions, the nuns would grill him. They wanted to know when he would do that and how he would measure the results.

Martinez learned the nuns had a long history of battling big energy companies and using shareholder resolutions to call for more renewable energy. As Sister Barbara told The New York Times in 2003: "It is a trend that I don’t think is going to disappear."

"Maybe we were being taken for a ride," Daly said. "But we gained a sense that this was a really productive enterprise, and we had developed an engagement over the years because we had worked with them."

Martinez found himself surprised, sometimes shocked, by the nuns’ tactics. "We had a lot of differences, but we also had the opportunity to talk through them in a non-litigious way," he said.

In the northeastern United States, Martinez noted, environmental groups usually pressured state governments or legislators to rein in utilities, but here was a case where the sisters had helped create a situation where Southern wanted to hear his opinion.

"Legally, it’s a long haul trying to push people through litigation. With the conversations we’ve had, we’ve had a much better path," Martinez explained, referring to his experience with Southern and the Interfaith Center on Corporate Responsibility (ICCR), the group organized by the two Catholic nuns.

Aires and Daly set the rules for these discussions. They had to be dialogues where people listened to one another and, over time, got to know one another. Where there was no agreement, the groups agreed to disagree with Southern.

But where there was a glimmer of an agreement, Southern and its stakeholders pressed ahead. The sisters preferred data over arguments, and Fanning has produced some they respect. When he took over the company in 2010, 70% of its electricity came from coal. This year, it dropped to 20%.

"The last 10 years have certainly been interesting," said Sam Collier, an Atlanta lawyer who began attending the stakeholder meetings as a representative of the Sierra Club. "Fanning’s been so open and willing to share all perspectives, he doesn’t try to quell the discussion. He encourages it, and I think that’s a real healthy thing.

"That’s not to say they [Southern] have been a paragon of cleanliness through the years," Collier added. But he gave the company some credit for turning the ship around. "I feel like we’re all starting to work together," he said.

Southern has moved aggressively into wind and solar power as prices for renewable energy have dropped, Collier pointed out. "Most things are done for economic reasons," he said.

But the issue of economic justice, he added, created a path of agreement between the stakeholders and Southern. In the South, many poor people cope with cold winter nights by turning on space heaters and stoves. "They do all kinds of dangerous things to heat their homes," Collier said.

Under Fanning, Southern developed one of the nation’s first big energy efficiency programs. It audits a family home, recommends more efficient heating and better insulation, and then helps finance the upgrades.

"They drop the bill 10% right away, so you’ll immediately see savings," Collier explained. "It finances upgrades for people who don’t ever have the kind of money to finance that work."

Collier, who no longer represents the Sierra Club, still enjoys the stakeholder meetings. The biggest victory for the ICCR began to take shape in 2017, when Daly went to Southern’s annual shareholder meeting and pushed the company to align its emissions reduction policies with the 2015 Paris Agreement, under which 195 nations agreed to limit future warming to below 2 degrees Celsius by 2050.

Members of the ICCR, including religious groups, own shares in Southern and often use them to rally companies to hit targets that corporate leaders don’t necessarily agree with. In 2017, Daly asked to speak and was in the middle of her argument when she began to gag. Her throat was dry. She needed a glass of water.

Fanning, who was educated by Catholic sisters in the tiny borough of Florham Park, N.J., got up, filled a glass and brought it to her. The nun drank, finished her proposal and drew support from 46% of Southern’s shareholders. After that, according to Collier, Southern informed the ICCR that there was no need for Daly to make the same proposal again: "Let’s work something out."

In an interview, Fanning noted that he didn’t invent the meetings with the ICCR, but they were handled by Southern officials at a lower level until he became CEO and started inviting top corporate brass to join in.

Defending coal in the face of climate change, Fanning said, "was like trying to keep the waves off the beach." He wanted Southern "to lean in and engage in an active way with the environmental community." The nuns suggested bringing the Sierra Club, the NRDC and other more activist groups, and he supported them.

"I remember the very first meeting we had. The point wasn’t so much ‘Hey, let’s argue about environmental policy.’ It was really to talk about our families, believe it or not. We all had common ground. We wanted to make sure we were leaving a place for our kids that was better than we had it.

"The challenge wasn’t being a good steward of the Earth, but rather the pace of change and how we can work together," he added. "Starting that effort, Sister Barbara was very helpful and central to it, primarily because she and Sister Pat do it so well and we had a background where she [Aires] could help lead the conversation."

"Sister Barbara is a street fighter. She’s terrific. She pulls no punches. I love the way she handles herself," added Fanning.

Other nuns are also working on climate change. A convent in Louisiana is being transformed to protect a neighborhood in New Orleans from flood damage (Climatewire, Jan. 7).

In an interview, Aires recalled that her concerns about Southern go back to the 1970s, when the company was importing coal from the apartheid regime in South Africa.

Southern recently announced that two about-to-be-completed nuclear power plants called Plant Vogtle Units 3 and 4 in eastern Georgia will play a role in bringing its greenhouse gas emissions down to zero by 2050. The plants, named after a former Southern CEO, have been delayed by cost overruns as well as financial and technological issues since construction began in 2009.

"We’re not thrilled that they [Southern] are still nuclear," Aires said. "We’ll continue to be attentive to a variety of issues around nuclear power and waste."